As Sri Lanka's leader agrees to step down, protesters sing on the streets. But the future is uncertain and the economy is wrecked 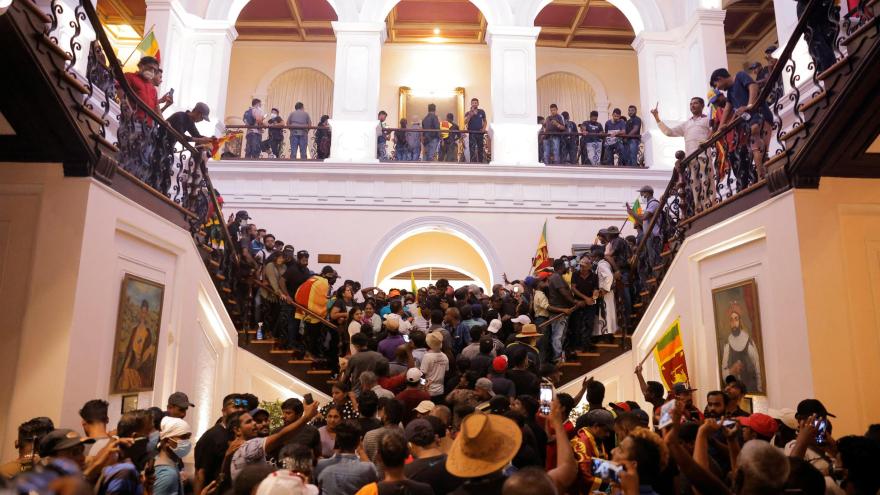 (CNN) -- Sri Lanka woke on Sunday to an uncertain future, with both its President and Prime Ministerset to step down after thousands of protesters stormed their homes in fury over the nation's crippling economic crisis.

President Gotabaya Rajapaksa has agreed to resign on July 13, the speaker of the country's parliament announced late Saturday, following a tumultuous day that saw protesters break into Rajapaksa's official residence in Colombo and splash around in his swimming pool.

Protesters also targeted Prime Minister Ranil Wickremesinghe, setting on fire his private residence on Fifth Lane, an affluent neighborhood in the capital. Wickremesinghe later said he was willing to resign "to make way for an all-party government."

The announcements -- which protesters celebrated by singing on the streets and setting off fireworks -- marked a historic victory for the protesters, who have been demanding Rajapaksa's resignation for months over his government's failure to address the country's economic collapse.

Four other ministers stepped down over the weekend.

Minister of Tourism and Land Harin Fernando, Minister of Labour and Foreign Employment Manusha Nanayakkara and Minister of Transport and Highways and co-spokesperson for the cabinet Bandula Gunawardena all resigned on Saturday, according to the ministers' offices.

The economic turmoil has plunged the Indian Ocean island nation of 22 million into a dire humanitarian crisis, leaving millions struggling to buy food, medicine and fuel.

After months of largely peaceful protests, anger reached tipping point on Saturday, as more than 100,000 people massed outside Rajapaksa's residence, calling for his resignation.

Video broadcast on Sri Lankan television and on social media showed the protesters enter the President's House -- Rajapaksa's office and residence -- after breaking through security cordons. Images show demonstrators inside the whitewashed colonial-era building and hanging banners from the balcony.

Later on Saturday, live video streamed by local media and seen by CNN showed Wickremesinghe's home engulfed in flames as crowds gathered around.

Neither the President nor Prime Minister were at their residences when the buildings were breached. Both had been moved to secure locations prior to the attacks, according to security officials.

Saturday's drastic escalation of unrest could spell the end of the Rajapaksa family's political dynasty, which has ruled Sri Lanka for most of the past two decades.

In a video statement late on Saturday, Parliament Speaker Mahinda Yapa Abeywardena said Rajapaksa's decision to step down "was taken to ensure a peaceful handover of power."

But how that transition of power will eventually play out is engulfed by uncertainty.

If both Wickremesinghe and Rajapaksa resign, under the Sri Lankan constitution, the speaker of parliament will serve as acting president for a maximum of 30 days. Meanwhile, parliament will elect a new president within 30 days from one of its members who will hold the office for the remaining two years of the current term.

The United States Senate Foreign Relations Committee said on Twitter on Sunday that Rajapaksa has "lost the confidence" of his people.

"Now, all parties must work together with the international community for a new government that respects the democratic and economic aspirations and upholds human rights the Sri Lankan people deserve," the committee said.

"The military and police must exercise restraint and be part of the solution, not part of the problem, in this crisis," it added.

At least 55 people have been injured in the protests, according to Dr. Pushpa Zoysa with the National Hospital of Sri Lanka, who said the figure included three people with gunshot wounds. Among those injured is a lawmaker from eastern Sri Lanka, she added.

Two of the journalists from the Sri Lankan TV channel Newsfirst had their cameras rolling at the time. Video aired by Newsfirst shows two journalists being pushed to the ground by police during the confrontation. Fellow journalists who rushed to their aid were then also attacked, Newsfirst reported.

Inspector General of Sri Lanka Police CD Wickremaratne said the officers associated with the attacks were "suspended immediately," according to an audio statement aired on national television.

"Freedom of media is paramount to democracy in Sri Lanka," he said, asking both security forces and protesters to "act with restraint to prevent any violence and ensure the safety of the public."

Sri Lanka's media freedom advocacy group Free Media Movement called for an investigation into the police attack on the journalists, saying "the perpetrators responsible for these brutal attacks" must be brought to justice.