As spring thaws the Minnesota ice, a new pipeline battle fires up 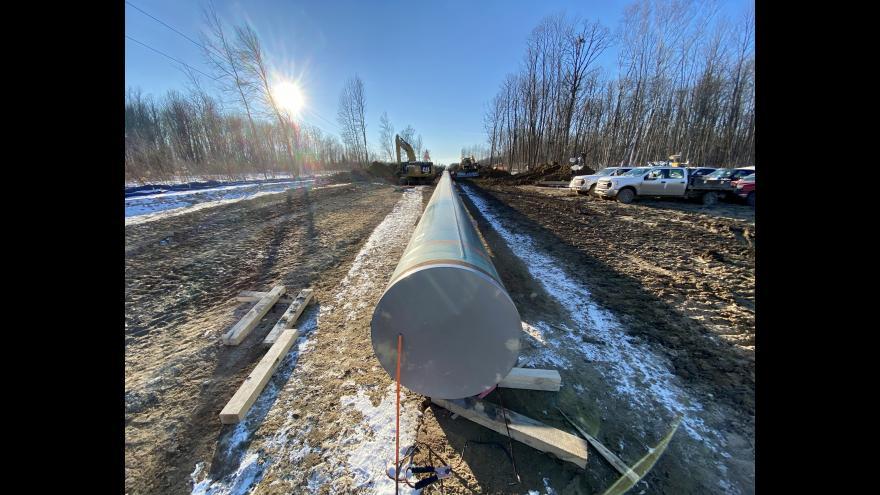 A section of pipe waits to be connected.

(CNN) -- In the north woods of Minnesota, the mighty Mississippi River looks like a frozen creek. After a bitter February, you can stroll across it with more fear of windburn than thin ice. And if you stroll one particular spot near Palisade, you'll find giant pipe, heavy machines and competing signs. A few read "No trespassing" in block letters. The rest say "Water is life" and "Stop Line 3" in hand-painted colors. It is the latest front in the pipeline wars.

Originally built in the 1960s, the Enbridge Line 3 crude oil pipeline snakes 1,097 miles from the tar sands of Canada to Superior, Wisconsin. Of the roughly 340 miles through Minnesota, the replacement pipeline includes new sections and added capacity and is cutting through some of the most pristine woods and wetlands in North America. In little camps along the way, a small-but-growing group of protesters is out to stop them, driven by ancient prophesy and the promises of a new President.

When Joe Biden killed plans for the Keystone XL pipeline within hours of taking the oath, many Native American tribe members and environmentalists saw it as validation for all the cold nights spent protesting another pipeline at Standing Rock. Though they failed to stop the oil now flowing through the Dakota Access Pipeline, maybe this was a sign Biden would take their side in the David versus Goliath fight to stop Line 3. And maybe people would finally heed an ancient warning known as The Seven Fires Prophecy.

In Ojibwe tribal lore, an environmental moment of reckoning was predicted in the time of the Seventh Fire, when "the light skinned race will be given a choice between two roads," one green and lush, the other black and charred. A wrong choice, it was warned, would "cause much suffering and death to all the Earth's people." The Ojibwe are of the largest groups of Native Americans north of Mexico with tribal members stretching from present-day Ontario in eastern Canada all the way into Montana.

As a half-dozen female tribal elders sing and pray alongside the frozen Mississippi, it's obvious that for some bands, the fight is sacred and eternal. The question is how many will join them in the face of tougher legal challenges, increased pressure from police and the limits of the pandemic.

"There have been over 130 people arrested so far in just the last few months," tribal attorney and activist Tara Houska told CNN. Some are physically arrested at construction sites, but police also watch social media feeds to identify trespassing protesters and send summons in the mail. Before we walked the frozen river, Houska attended her hearing with a judge over Zoom and was ordered to post $6,000 bail.

"They seem to think that it's going to deter us from protecting the land. They are fundamentally missing the point of what water protectors are doing, which is willing to put ourselves our freedom, our bodies, our personal comfort on the line for something greater than ourselves," Houska said.

After living in Washington and fighting Dakota Access and Keystone XL, she is now hoping this movement helps convince the Biden administration that the Army Corps of Engineers and Environmental Protection Agency during the Trump administration were shoddy in their environmental impact studies and too hasty in issuing permits.

But Canadian pipeline giant Enbridge insists that it passed every federal, state and tribal test. The company has been rushing to complete the pipeline before politics or the courts can stop it. Of those 340 miles cutting through The Land of 10,000 Lakes, more than 40% is already in the ground.

"Line 3 is not like the Keystone XL pipeline," Enbridge Chief Communications Officer Mike Fernandez told CNN. "It already exists. And it already is an energy lifeline for literally millions of people in the US and in Canada. And the reality is, even as we see great growth in renewables, we're still going to need some fossil fuels 40 years to come."

But since Biden has built the first White House with a climate agenda at every agency, the biggest argument against the pipeline may be over the kind of energy running through Line 3. Unlike liquid Texas crude hidden in pockets of rock, Alberta's oil is part of the Canadian soil under the boreal forest. It can't be pumped unless it is steamed. As a result, it is the dirtiest and most destructive fossil fuel after coal.

A trip to the tar sands boggles the mind with its scale. Massive, man-made pits crawl with oversized dump trucks, filled with what feels like sticky cookie dough and smells like asphalt.

Tens of thousands of tons are moved into sprawling processing plants each day where the goop is boiled and blasted with Athabasca River water heated with natural gas. To separate the flammable bitumen from the dirt and clay, it takes six gallons of fresh water to produce one gallon of tar sands gasoline and the lakes needed to hold the resulting toxic waste are among the biggest man-made creations in history.

The sheer amount of energy required to turn sticky earth into liquid fuel not only makes Alberta tar sand more expensive, it produces 15% more planet-cooking carbon pollution, according to the Union of Concerned Scientists.

But to the workers building Line 3, pipelines are safer and cleaner than moving oil by truck or train. And if you stop Line 3, they argue, it does nothing to stop the world's voracious demand for the kind of fuels that burn.

"I think, frankly, people have been drawn to pipelines because it's easy to fight pipelines," said Kevin Pranis with the Laborers International Union of North America as cranes lifted 25,000-pound pipes as long as city buses.

While most of the 5,200 people building Line 3 are from oil states like Texas and Louisiana, "some 400 will be Native Americans," Fernandez told me. "We met with all of the First Nations along that pipeline. We listened, and as a consequence there are 320 or so route modifications."

Enbridge's tribal relations suffered in February, when two men working on Line 3 were caught in a human trafficking sting set up to protect underage Indigenous girls.

"The two individuals that that were arrested have been fired." Fernandez said. "We don't tolerate that kind of activity or behavior and it's prompted us to go to one of the contractors to say 'This is our expectation, that they be trained to a certain level.'"

Follow the pipeline route, and feelings can change by the tribe or the mile.

"You think that people that are scrambling at home, running out of gas with no heat, are thinking about climate change?" said Jim Jones. "They're thinking about how they're going to heat their home and put food on the table."

As a member of the Leech Lake Band of the Ojibwe and a former expert in cultural anthropology for the state, Enbridge hired Jones to walk the pipeline route and ensure no violation of Indigenous spaces or ruins.

"I'm at peace that I've done the best I can to protect what's important to us," he said. "And I can honestly tell you, as of today, nothing of historic context has been unearthed or disturbed."

After the Fond du Lac Band of Lake Superior Chippewa struck a deal with Enbridge to run a part of Line 3 through their reservation, tribal leaders said they were put in an impossible position. Some tribes worked with Enbridge on the route, while others like Winona LaDuke of the White Earth Band of Ojibwe have nothing but scorn for Enbridge.

LaDuke is a longtime environmental activist who twice ran for vice president on Ralph Nader's Green Party ticket, but after fighting for Indigenous rights against extractive energy companies for years, she never imagined the fight would come to her.

"Enbridge wants to criminalize us," she said. "I'm a grandmother, you know, graduated from Harvard, ran twice for vice president, at what point did I become a criminal? I'm just asking, 'How much risk should we as Americans take so a Canadian multinational can get a little richer at the end of the tar sands era?'"

She helped convince a sympathetic local to sell them a little piece of land where the pipeline intersects the Mississippi and as the weather warms, the protesters hope their number of tents, yurts and ice-fishing shanties will grow faster than Enbridge can drill under the frozen Mississippi.

"Our people say 'Don't pick a fight with Mother Nature. You can't win, and we're getting we're getting pounded. So why would you pipe the equivalent of 50 new coal fired power plants with this?" LaDuke said, pointing at Line 3.

"The tar sands is the gun. This is the trigger."