As riot raged at Capitol, Trump tried to call senators to overturn election 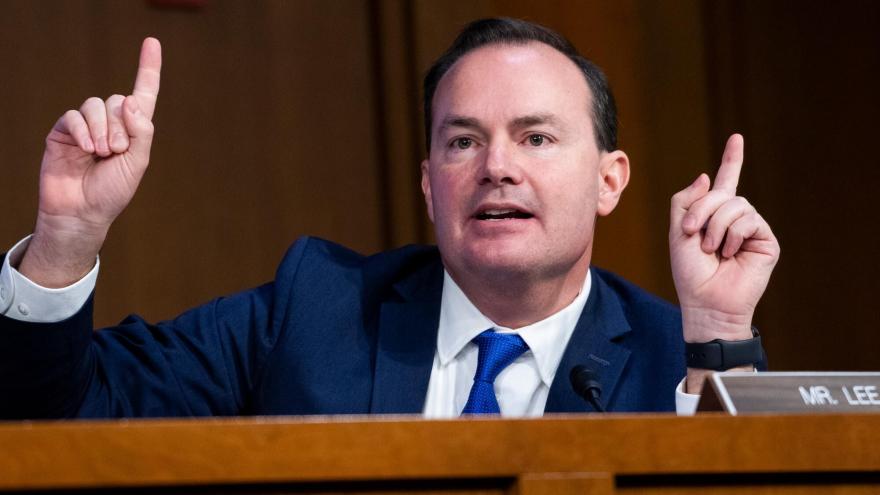 President Donald Trump and his attorney Rudy Giuliani both mistakenly made calls to Republican Sen. Mike Lee earlier this week. Lee, in this image, is seen in the Hart Senate Office Building on October 13, 2020 in Washington, DC.

(CNN) -- President Donald Trump and his attorney Rudy Giuliani both mistakenly made calls to Republican Sen. Mike Lee as deadly riots were unfolding at the US Capitol earlier this week, a spokesman for the senator confirmed to CNN -- calls that were intended for another GOP senator the White House was frantically trying to convince to delay the counting of Electoral College votes.

Lee's spokesman said the calls from Trump and his attorney were intended for Sen. Tommy Tuberville, a newly elected Republican from Alabama.

The effort by the White House to get Tuberville to delay certification of the votes provides insight into the President's thinking and priorities as a mob of his supporters lay siege to the iconic building. As the President worked to convince Tuberville to delay the process, he and other top White House officials did little to check in on Vice President Mike Pence while he and members of his family were inside the breached Capitol, a source close to the vice president told CNN.

Trump first called the personal cell phone of Lee, a Utah Republican, shortly after 2 p.m. ET. At that time the senators had been evacuated from the Senate floor and were in a temporary holding room, as a pro-Trump mob began breaching the Capitol.

Lee picked up the phone and Trump identified himself, and it became clear he was looking for Tuberville and had been given the wrong number. Lee, keeping the President on hold, went to find his colleague and handed Tuberville his phone, telling him the President was on the line and had been trying to reach him.

Tuberville spoke with Trump for less than 10 minutes, with the President trying to convince him to make additional objections to the Electoral College vote in a futile effort to block Congress' certification of President-elect Joe Biden's win, according to a source familiar with the call. The call was cut off because senators were asked to move to a secure location.

CNN has reached out to Tuberville's office for comment.

The second call to Lee came in at 7 p.m. ET from Giuliani. Lee did not answer the call so it went to voicemail. Lee's office confirmed to CNN that the voicemail was intended for Tuberville and the message left from Giuliani was very similar to one that another unnamed GOP senator received. The transcript of that call was published by the conservative outlet The Dispatch as well as the news blog emptywheel.

"Sen. Tuberville? Or I should say Coach Tuberville. This is Rudy Giuliani, the President's lawyer," he said according to to the transcript.

"I'm calling you because I want to discuss with you how they're trying to rush this hearing and how we need you, our Republican friends, to try to just slow it down so we can get these legislatures to get more information to you," Giuliani said, referring to unfounded claims of voter fraud in the presidential election.

"I know they're reconvening at 8 tonight, but it ... the only strategy we can follow is to object to numerous states and raise issues so that we get ourselves into tomorrow -- ideally until the end of tomorrow."

Tuberville was unaware that Giuliani had tried to reach him until it was publicly reported, according to the source.

Tuberville was likely seen by Trump and Giuliani as someone who could help further their cause on Wednesday, as he was among a group of six GOP senators who voted to sustain an objection raised against Arizona's electoral votes, which failed 93-6.

CNN reported on Wednesday that even after Congress was reconvening that night following the riot, Trump was still urging senators to push ahead with the protest on the certification of Biden as President, according to a source familiar with the discussions.