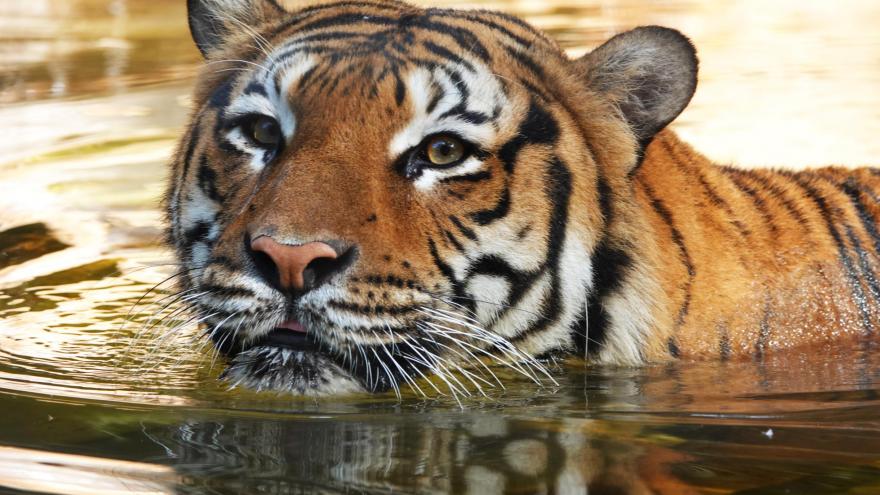 (CNN) -- Authorities are considering charges against a man attacked by a tiger after entering an unauthorized area after hours at a Naples, Florida, zoo, leaving a deputy no choice but to kill the critically endangered cat.

Zoo officials' thoughts are with the badly injured man -- identified as 26-year-old River Rosenquist of Naples -- who is facing an arduous healing process, said Jack Mulvena, president and CEO of Naples Zoo at Caribbean Gardens. He noted that Rosenquist, who worked for a commercial cleaning vendor, repeatedly told a 911 dispatcher, "I'm sorry," as he pleaded for help Wednesday evening.

"Our thoughts and well wishes are with River Rosenquist and his family and his doctors in what is going to be a very difficult recovery," Mulvena said. "It was a bad mistake, a bad decision, but we only wish him well in the recovery and I want to say that from the heart."

Mulvena praised the Collier County deputy who killed the tiger. Following the incident, the zoo CEO met with his weapons team, which would've been dispatched had the attack occurred during zoo hours. Its members told him they would've taken the same course of action as the deputy, he said.

"Their deputy tried to distract the tiger first, as you saw from the footage, and faced a very difficult decision -- and we support that decision," Mulvena said.

The cleaning company for which Rosenquist works typically cleans the zoo hospital, commissary, gift shop and two bathrooms, Mulvena said. Third-party employees are not supposed to enter certain areas in the zoo.

"Their job is very specific, and they're not to be in any areas that they're not supposed to be in," he said.

Mulvena is not sure why Rosenquist climbed over the visitor barrier designed to separate zoo patrons from Eko, the 8-year-old Malayan tiger, he said.

"We suspect it was to pet or to feed, but we don't know for certain. Only River knows that," Mulvena said.

The 911 call begins with Rosenquist screaming, "Help me! I'm at Naples Zoo! I'm being attacked by a tiger please, please, please!"

The dispatcher tries for about 9 minutes to calm Rosenquist as he gutturally wails, pleading over and over for help. Between his screams, he explains he is just outside the cage and the tiger has his hand and is going to rip off his arm.

"They're coming to you," the dispatcher replies, assuring him deputies are en route.

The man apologizes profusely between his pleas for help. He doesn't have much breath, he says. The deputy arrives and within a minute, a gunshot is heard and the call ends.

'You did the right thing'

A body camera captures the deputy and a zoo employee running down a dark path toward the tiger enclosure. Upon hearing Rosenquist crying for help, the deputy says, "Oh my God, is that real?"

Rosenquist is on the ground, his foot pressed against the fence. His mangled arm is through the fence, Eko's jaws clamped around it. As Rosenquist continues to plead for help, the deputy asks for a tranquilizer and tries to distract the animal before approaching the fence, training his weapon on the big cat and firing. The deputy had to make the decision inside of 40 seconds.

Eko vanishes, and a paramedic pulls Rosenquist away from the fence and passes him over the safety barrier to other first responders. Someone calls for a tourniquet as Rosenquist says, "Oh no! Oh no!"

As the deputy explains he doesn't know where he shot Eko, paramedics load Rosenquist onto a stretcher, his arm, bloodied from hand to bicep, dangling by his side.

Someone says to the deputy, "We tried, man. We tried to get him off. You did the right thing."

After hours, security patrols the 43-acre zoo campus, but the officers do not carry tranquilizer darts, Mulvena told reporters Friday. Even had a tranquilizer gun been available, the sedatives "do take time to set in," he said, and while it would've been a difficult decision for the zoo's dart team, they likely would've taken the same actions as the deputy, given the circumstances.

The deputy did not know where he hit Eko, he says on the footage. According to the Collier County Sheriff's Office, Eko retreated to the back of his enclosure. Deputies launched a drone and found the tiger unresponsive.

A zoo veterinarian tranquilized Eko for safe measure and entered the cage, where he found the tiger dead.

"Our deputy did everything he could do in that situation and he ultimately made the only possible decision he could in order to save this man's life," Sheriff Kevin Rambosk said. "This was a tragic encounter at our world-class zoo facility."

The sheriff's office is working with state and federal prosecutors to investigate the incident, and "the investigation will determine whether criminal charges will be filed," a CCSO statement said. The zoo is conducting its own investigation. Mulvena declined to comment on the possibility of charges, saying, "Honestly, our focus right now is on our staff."

While the zoo planned to open Friday with Eko's enclosure empty, Mulvena wanted to give his staff space to grieve, he said. Losing Eko is like losing a family member, and grief counselors will be on hand. Zookeepers were emotional Friday and won't be holding any of the talks they typically deliver to visitors, he said.

Zoo staff are planning graphics for the enclosure, directing visitors to the zoo website and an explanation of what happened, Mulvena said. They also want to establish a conservation fund to protect Malayan tigers in the wild.

Eko arrived at the zoo in December of 2019. Malayan tigers are typically found on the Malay Peninsula and in the southern tip of Thailand, according to the zoo's website. They're critically endangered and face threats including poaching and habitat loss, the zoo site said.

The local cleaning company for which Rosenquist works has been "fabulous to work with in the past," Mulvena said, but the zoo is suspending service for the time being. There have been no problems in the past, he said.

Likewise, this is the first incident of its kind at Naples Zoo and with Eko, zoo spokeswoman Courtney Jolly said, explaining the zoo has never had "anybody breach a barrier fence and put themselves in this situation."

The investigation thus far indicates the zoo is "doing what we needed to do and were following all of the appropriate safety protocols," Mulvena said.

Eko is "lying at rest" in the zoo hospital ahead of a Monday necropsy. The tiger was shot in the neck, and there is no exit wound, so Mulvena suspects the cause of death will likely be internal bleeding. Eko will be incinerated following the necropsy, he said.

Asked if zoo officials took any lessons from the incident, Mulvena told reporters, "I think the lesson learned is that you can't 100% prevent people from making really, really horrible decisions. I don't know what to say other than that."