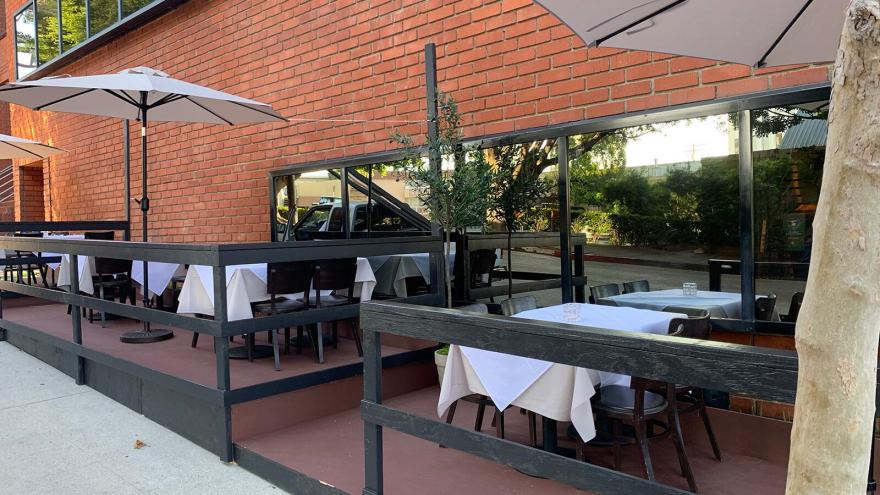 Tables are set up outside Toscana.

(CNN) -- When Los Angeles County announced Sunday it would once again close restaurants for indoor and outdoor dining, General Manager Ellen Rehak sat down with the owners of L&E Oyster Bar for a difficult conversation: Could they justify keeping their doors open?

It's a choice many area restaurants had been forced to face when dining was shut down at the start of the Covid-19 pandemic. Already operating on thin margins, restaurants sustained themselves on takeout until restrictions eased and they could adapt dining to include precautions against the virus.

But the impacts of Covid-19 in the region -- as nationwide -- have gotten worse. There were 1,575 coronavirus patients being treated Tuesday at Los Angeles county's hospitals, nearly double the tally from two weeks prior. With the virus spreading at "dangerous levels," according to County Public Health Director Barbara Ferrer, restaurants on Wednesday again were forced to halt indoor and outdoor dining and figure out how to survive on takeout, drive-thru and delivery sales alone.

For many, it means major financial hits, letting go of staff and uncertainty about the future.

"It's sad because depending on how long this will go, we can't keep all these people employed," said Andy Brandon-Gordon, who owns Nerano in Beverly Hills. "We're praying this (lasts) only three weeks, but we are prepared that it will be until the end of the year, if not longer."

Many restaurants had to make big changes to stay afloat during the first go-around.

"We had to rely on takeout, and I don't know any restaurant that can rely on takeout unless they're designed that way," said Michael Gordon, Brandon-Gordon's father and owner of Toscana.

So, the restaurant pivoted, offering meal kits so customers could take Toscana ingredients and recipes and create something hot and delicious in their own homes.

Nerano, meanwhile, turned its parking lot -- a luxury in Los Angeles -- into a Roman dining experience, investing in heaters, a temporary tent, decorative furniture for ambiance and old black-and-white Italian films projected onto the building next door, Brandon-Gordon said. The restaurant was preparing to install a permanent tent when the restrictions came down.

"I see the ramification of the inconsistency is that, unfortunately, small businesses and small restaurants spend a lot of money building outdoor dining in a time when they didn't have it," Rehak said.

The oyster bar, which she describes as a cozy, romantic spot with oysters served by candlelight, had to drastically reform its menu to become takeout friendly, relying now on lobster rolls, burgers and other "comfort foods" that travel well, Rehak said.

And if restaurants like hers could have adapted to just one set of restrictions -- even if it were takeout-only -- they might have had an easier time, Gordon said.

"That had a momentum going. And then when the restrictions were lifted, the guys in the kitchen, they can only do so much, so they focused back on eating on the premises and we let the other thing just fade away," he said. "Had it been a consistent situation, we would have built it up much more. The back-and-forth is just crazy making."

Staying open for family and friends

As frustrating as the changes may be, Rehak and Gordon say they are determined to make it work -- and their employees are a big part of that determination.

"I'm one of these people that, even without government funding, I would borrow the money to make sure our main staff are covered," said Gordon. "I'm not at all thinking I would ever throw in the towel."

He is willing to keep as many of his tight-knit staff paid at the restaurant he started 30 years ago, he said, with confidence they can get back to normal eventually.

Kinship among staff is common at restaurants, Rehak said, and can become like "a surrogate family and built-in friends."

Many of her employees are creatives living in Los Angeles and working in the industry so they can go to auditions and perform in improv schools. They are often living "hand-to-mouth" to pursue their ambitions, making it especially difficult to tell them their hours have been cut or they are out of work, she said.

L&E Oyster Bar is currently open five days a week, and Rehak said it may expand to seven -- which could very well lose money for the restaurant -- to give the kitchen staff the hours of work they need.

'What makes the neighborhood so special'

How these restaurants get through the pandemic is a concern of their patrons as well.

Trevor Howells frequents L&E Oyster Bar and has come to know the staff personally, he said -- even getting to know their partners and dogs.

He has been buying gift cards to help keep his local restaurants afloat, knowing he won't use them until they are back in a stable place financially.

"I'm very fearful that these places won't survive, and I think that's going to be very devastating to the community," he said. "We are trying to reach out and help any way we can, and it doesn't sound like help is coming any time soon."

Just a few weeks ago, Meredith Averill and her husband celebrated their backyard wedding (featuring just them, their photographer and an officiant) with a dinner on L&E's private balcony.

It only made sense for L&E Oyster Bar to be their venue, because they celebrate all the big moments of their life there, she said. Her father called to let the restaurant know it was their wedding day, and Rehak had flowers waiting at the table and took pictures.

It's restaurants like L&E Oyster Bar that are the reason she loves living in the Los Feliz and Silver Lake areas, she said.

"For them to go away, you would lose what makes these neighborhoods so special," she said.