As Jacob Blake's family seeks answers, little is known about the officer who shot him 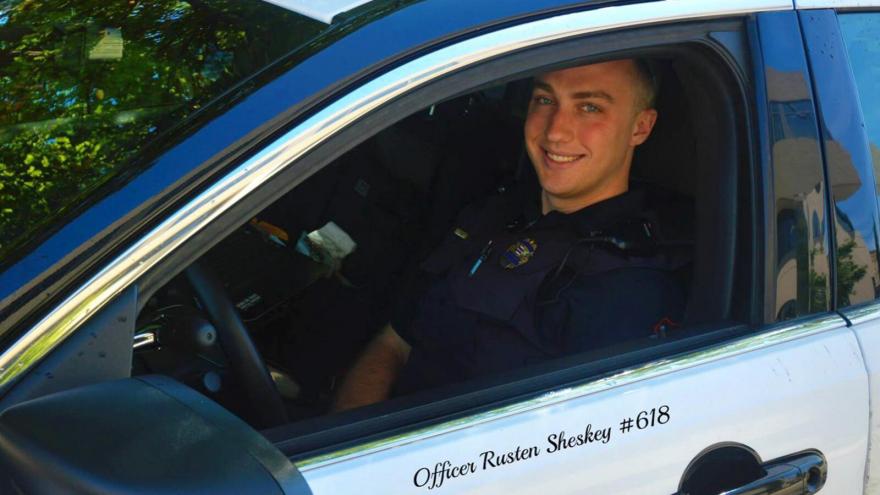 (CNN) -- Before he was identified as the police officer captured in a viral video in which he shoots a Black man multiple times in the back, Rusten Sheskey pedaled around the lakeside city of Kenosha, Wisconsin, as part of the bike patrol and walked the shopping mall beat during the holidays.

He'd occasionally bring a squad car home from work and turn on the siren for neighborhood kids, one neighbor recalled. An American flag flies outside his home in a middle-class neighborhood.

But four days after Sheskey's shooting of 29-year-old Jacob Blake prompted protests and rioting in the typically quiet streets of Kenosha, much remains unknown about the seven-year veteran officer and what prompted him to open fire.

Authorities have declined to provide information on a number of critical questions in the turbulent days since Blake was shot. Most importantly, they have not offered any detailed explanation for why Sheskey used deadly force on Blake as he leaned into a parked car.

Police and city officials also have not responded to public records requests for Sheskey's history with the department, including any previous uses of force or disciplinary issues. According to a memo from the police chief published on the city's website, Sheskey received a one-day suspension in 2017 for a violation regarding "safe operation of department vehicles."

Meanwhile, Blake remains handcuffed to a hospital bed. He was left paralyzed from the waist down in the aftermath of the shooting, which took place in front of three of his young children who were in the car.

Dispatch records indicate that Sheskey and other officers responded to a complaint from a woman saying that Blake was not supposed to be at her residence and would not leave. She also said he had taken her keys and would not give them back.

At a press conference Wednesday, Wisconsin Attorney General Josh Kaul said officers fired a Taser at Blake before the shooting, but that it was "not successful." Kaul said Blake admitted possessing a knife and officers recovered one from the floor of the car he was leaning into when Sheskey opened fire. Kaul did not say if Blake had brandished the weapon or what precise reason Sheskey gave for firing multiple shots.

Blake's family has demanded answers, too, wondering why Sheskey decided to use a gun to resolve the situation. At a news conference on Tuesday, Blake's family attorney Ben Crump called for the officer's arrest.

"We are demanding that the prosecutor arrest the officer who shot Jacob Blake. And we are also asking that these officers who violated the policies and their training be terminated immediately," he said.

A search of news sites sheds little light on Sheskey. He was profiled last year by a local outlet, the Kenosha News, saying that public service was what he liked most about police work.

"You're dealing with people on perhaps the worst day of their lives and you can try and help them as much as you can and make that day a little better," he told the paper, according to an article published in August 2019. For the most part, Sheskey said, "people trust us to do that for them."

Prior to joining the Kenosha Police Department, Sheskey was employed at the University of Wisconsin-Parkside, where he worked his way up from dispatcher to police officer.

A university spokeswoman declined to provide details about Sheskey's tenure other than to say he worked there from 2009 to 2013 as a dispatcher, police service associate and, finally, officer.

Attempts to reach Sheskey and his family were unsuccessful. Several officers either declined comment or did not respond to inquiries from CNN.

One officer said Sheskey has been unfairly dubbed a racist on the internet. The officer said there's a sense of futility when it comes to defending Sheskey.

"For somebody that knows him to come out and say he's a really solid cop and really good dude, it's gonna fall of deaf ears because he shot a Black guy," said the officer, who asked not to be named because he was not authorized to speak about the incident, which remains under investigation. "I don't think there's anything that I'm gonna tell you that's gonna make a difference because people believe what they want to believe."

In Sheskey's neighborhood, people were reluctant to talk and most declined to provide their names when they did.

One woman called Sheskey an "outstanding citizen," adding, "I think the young man went to work one day and was put in a bad situation."

She declined to elaborate before quickly shutting her door.

Cathy Broadway, an educational sign language interpreter who's lived on Sheskey's block for about 20 years, said she didn't know the officer or his family and had no idea he lived on their street until a few days ago.

"I know a lot of people packed up and they left," Broadway said. "Our neighborhood could be a target." She said she stayed up late Wednesday night listening to a police scanner and sent her son to stay with family during the unrest.

Broadway, 46, who called the video of Blake's shooting "horrific," said she never imagined her city would find itself in the national spotlight.

"People call it Keno-where," she said. "Now we can't call it that because everyone knows where it is."