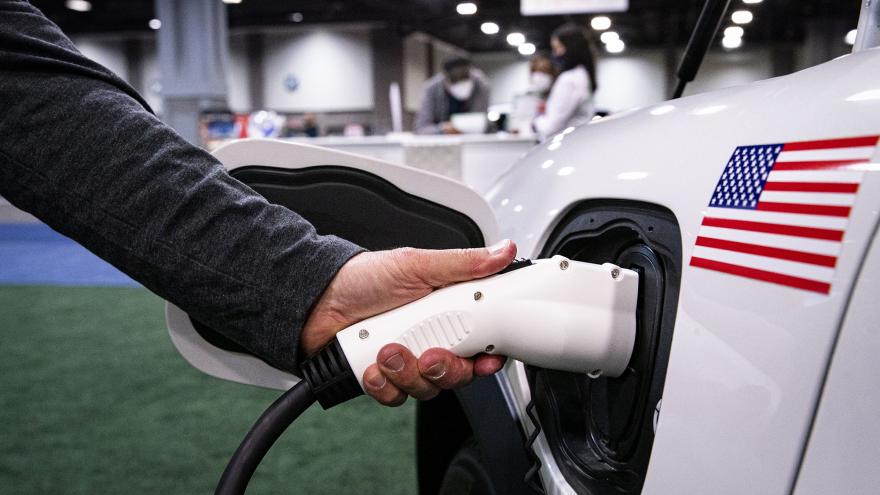 (CNN) -- As gas prices soared and deepened the pain at the pump this month, consumers reacted by searching for — and possibly dreaming of — more fuel-efficient vehicle alternatives. Web search interest in electric vehicles reached a record high in the US in March, according to Google Trends.

While high gas prices are certainly one reason, Jesse Toprak, chief auto analyst at Autonomy, a car subscription company, said the new interest is spurred by a combination of things.

"It's a direct reaction to high gas prices, and on top of that, we're also seeing more and more EV models available to choose from for consumers," Toprak told CNN. "So it's a function of I will say, mostly high gas prices, but also availability of new EV products in the marketplace."

But that doesn't mean people are actually shopping.

Many are likely exploring the costs and benefits of these cool-looking, electricity-fueled cars. EVs are still prohibitively expensive for many US households. And rather than shelling out even more money up front, many consumers tend to hold on to their current vehicles for as long as they'll last.

Yet Toprak said the Google Trends search is a good measure of consumer demand, and that it matches what his company has been seeing in recent weeks: increases in inquiries and reservations for electric cars.

"We're also seeing that more customers want to educate themselves, even if they've been on the sidelines so far," Toprak said. "There's clearly an interest in consumers trying to figure out, 'is this a better alternative for me?'"

In addition to high gas prices and growing concerns about the changing climate, marketing also likely played a big role in the recent spike in interest, said Melinda Hanson, co-founder of strategy firm Electric Avenue. During the recent Super Bowl, for example, major automakers including BMW and General Motors put out a flurry of snazzy electric vehicle ads.

"The fluctuation in fuel prices, combined with a lot of the increased promotion from car companies around electric vehicles has really sparked more interest," Hanson told CNN. "It's really the first step; there's a long way to go to get people familiarized with electric vehicles. This is good that we're seeing the search and hopefully it does help to educate people and convince them that this is a good idea."

It's also not just EVs; people are looking for more fuel-efficient vehicles in general, including hybrids and compact cars, of which sales spiked early this year, according to Michelle Krebs, executive analyst for Cox Automotive.

The problem, Krebs said, is that the EV supply is currently limited, which is what many people searching for electric vehicles on Google are probably finding out. Much like how combustion cars need gasoline, electric cars need batteries; but due to supply chain issues, the materials critical to making those batteries including lithium, nickel and cobalt are in short supply.

"Inventories are very low, and a lot of the new models that are coming out are reserved and sold out," Krebs told CNN.

"We thought it would get better by the end of this year, but we didn't have a war on the agenda," she added. "So we've actually cut back our forecast for this year, because we thought supply would be better, but there are too many supply chain disruptions right now."

Given the speed at which the climate crisis is accelerating, Toprak said he hopes the record high gas prices would give consumers the "extra push and extra impetus" to switch to EVs that will enable the changeover to occur much faster than anticipated.

But there's also another option to go electric and avoid those pesky supply-chain issues — electric bicycles.

As more people plug in "electric cars" in their Google searches, Hanson hopes consumers also learn the benefits of having an electric bike along the way.