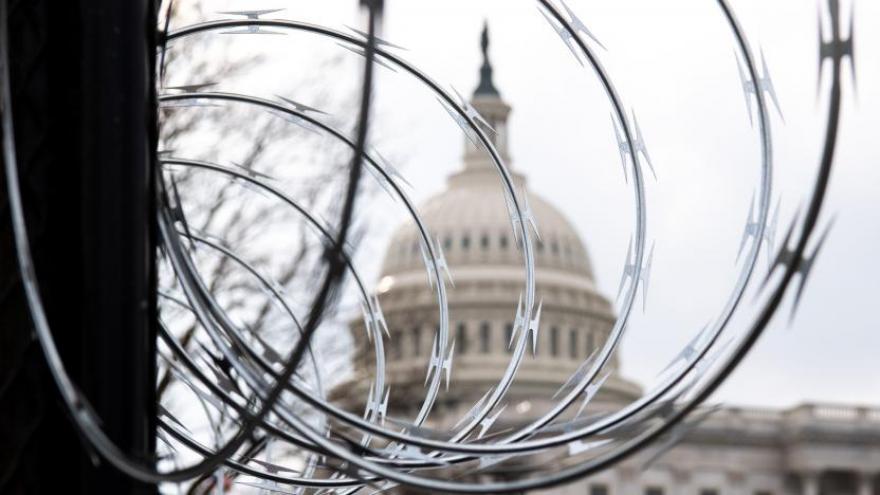 Razor wire is seen on top of a security fence surrounding the US Capitol in Washington, DC, in January. The last of the temporary fencing around the Capitol will be removed starting July 9.

(CNN) -- More than six months after the deadly Capitol insurrection, the final temporary security structure is coming down, but there are still plenty of concerns about how the campus will be protected going forward and if Capitol Police will have the resources they need to bolster security just months after a deadly riot.

The fencing, topped with razor wire, that once wrapped around the entire Capitol Hill campus and now only surrounds Capitol Square, started to come down Friday and is scheduled to be completely removed by the time lawmakers return to session next week.

While the physical signs of the security flaws from January 6 will be gone, the House and Senate have yet to come to an agreement on a wide ranging funding package designed to boost Capitol security, plug some of the holes discovered in the wake of January 6 and inject cash into the beleaguered Capitol Police Department. USCP is facing staffing and recruitment shortages as many of their members deal with the fallout from the riots.

The Senate Appropriations chairman, Democratic Sen. Patrick Leahy of Vermont, warned in June that the department could run out of money to fund basic operations by August.

In addition to the Capitol Police, the National Guard could be forced to cut back on training in August if new money is not appropriated. The National Guard outlined the slew of training programs and spending that would have to be cut if Congress does not provide them funding by August 1.

Leahy has a good working relationship with Sen. Richard Shelby of Alabama, the Republican ranking member on the Appropriations panel, and their staffs have been trading proposals backing forth, aides say.

But they too have run into road blocks.

On Friday, Leahy and Shelby traded attacks over the negotiations. Leahy released a statement calling for quick action to address the budget shortfall.

"We did not budget for an insurrection, and without action the Capitol Police will go without payment for the hours of overtime they have incurred, without proper equipment, and without sufficient mental health services to deal with the continued trauma from that day. The National Guard, who poured into the Capitol from every State, now may need to cut training that they need to prepare for overseas deployments or response at home," Leahy said.

He accused Republicans of standing in the way of getting the legislation passed.

"It has been seven weeks since the House passed a bill to address these needs with no Republican votes. In the Senate we continue to press for action, but we have not found a willing partner," he said.

But Shelby claimed he was ready to support a bill that addressed the immediate needs right away.

"We should pass now what we all agree on: the Capitol Police and National Guard are running out of money, the clock is ticking, and we need to take care of them," Shelby said in a statement to CNN.

According to an aide on the Senate Appropriations Committee, Shelby believes the panel should revisit funding for more extensive security measures when there is a comprehensive assessment and plan -- and should not let that get in the way of the immediate needs.

While they continue to negotiate, a Senate Democrat aide told CNN that their differences could come to a head as they get closer to the funding running dry.

The urgent needs set the stakes for an important round of deal making at the same time the Congress takes up an incredibly busy July that includes tackling issues like infrastructure, voting rights and policing.