As Colorado River crisis grows, some officials say it's time for feds to drop the hammer on water cuts 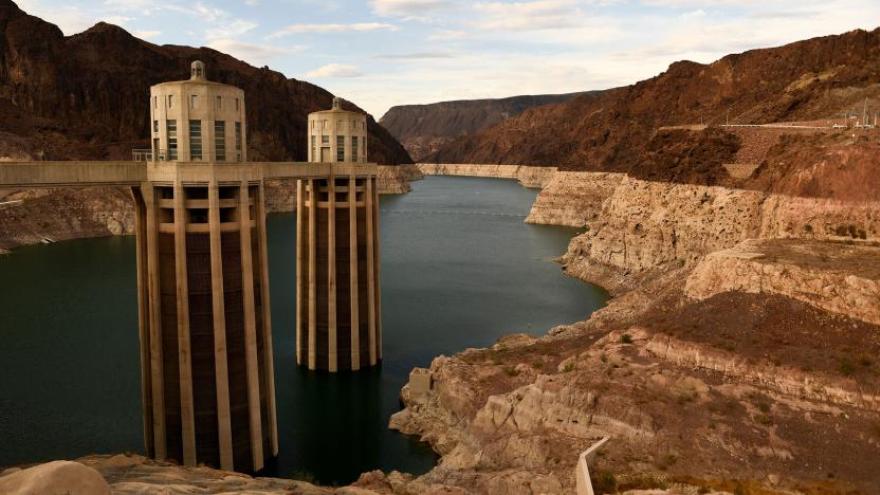 Intake towers for water to enter to generate electricity and provide hydroelectric power stand during low water levels due the western drought in July of 2021 at the Hoover Dam.

(CNN) -- As the Colorado River system spirals toward its demise, some Western water officials, lawmakers and experts had expected federal officials on Tuesday to announce an ambitious plan to cut usage and save the river basin after stakeholders failed to meet a Monday deadline to do it themselves.

At the very least, they expected federal officials to give stakeholders a new, strict deadline to produce a plan to make cuts themselves.

But neither of those things happened.

The Interior Department did announce a Tier 2 water shortage on the river, which will lead to new cuts starting in January, but those reductions had been agreed to for more than a decade, and water authorities had already worked them into their operations.

What experts say is needed now is a big plan for a big crisis, which is what US Bureau of Reclamation chief Camille Touton demanded in June when she told Colorado River states and stakeholders to form a plan by August 15 to cut up to 25% of their usage — 2 to 4 million acre-feet per year — to stabilize the river.

Touton said at the time that if the river's stakeholders failed to come up with a plan, the federal government would step in to protect the basin. But after her Monday deadline failed to produce a deal, Touton said Tuesday the bureau will announce steps in the future -- but didn't say what exactly those steps would be. The mandatory cuts associated with the Tier 2 shortage will lead to a reduction of 721,000 acre-feet of river water usage -- far from Touton's desire to cut up to 4 million acre-feet.

Touton said Tuesday her agency is just "starting the process," and did not specify any new deadlines that might be set for additional drastic cuts.

The lack of a public deadline or plan of action from the Reclamation Bureau came as a surprise to stakeholders and experts who feel it's time for the feds to drop the hammer.

"We got a very softly worded, kind letter" on Tuesday, said Sarah Porter, the director of the Kyl Center for Water Policy at Arizona State University. "That's why we can't answer these questions; apparently, we haven't had a serious deadline. It's kind of like if you keep telling your dog no, the dog starts ignoring you."

Top Arizona water officials told CNN the federal government is still trying to "cajole" states to make their own plans to cut water usage, but in the meantime, the water is running out.

"The approach the United States has been taking has been taking is trying to facilitate voluntary offers, cajole the states to do what the states ultimately need to do, rather than getting out the stick," said Ted Cooke, general manager of the Central Arizona Project, a renewable water supply in the state.

Tom Buschatzke, director of the Arizona department of water resources, said after one major missed deadline, time is running out for a river system that is quickly failing. While it would be nice to come to a voluntary agreement rather than get a mandatory one handed to them from by the feds, the Arizona officials asked for a firm hand and a fast timeline.

"The short answer is yes," Buschatzke said. "We need the threat of action by the federal government."

Administration officials indicated they did not want to impede state negotiations and wanted to focus on using federal money from climate and infrastructure bills to incentivize voluntary water cuts and make improvements to Western water infrastructure.

"Today we're starting the process and more information will follow as far as the actions we'll take in that process," Touton said Tuesday. "I want to continue to push on the need for partnership in this space and the need for collaboration and finding a consensus solution. Not just for next year but for the future."

During negotiations between June and August 15, Arizona and Nevada presented a plan to cut 2 million acre-feet of water usage from the Lower Basin states and Mexico, Buschatzke and Cooke said at a news conference on Tuesday. But that proposal was rejected by California officials and the US Bureau of Reclamation.

"The other two parties in the room were not comfortable with moving forward," Cooke said.

A Metropolitan Water District of Southern California's general manager Adel Hagekhalil confirmed in a statement that none of the proposals put forward during that time received enough support.

"Over the last two months we've discussed several different proposals -- from Arizona, from California, from others involved in the discussions -- but unfortunately none of them received universal support from everyone," Hagekhalil said. "Now is not the time to draw lines in the sand. We must continue to work towards common ground."

A spokesperson for the Bureau of Reclamation did not comment on why it rejected Arizona and Nevada's plan.

Hagekhalil said his district was appreciative of Touton's "support in giving us a limited extension to meet the goal" of voluntary cuts.

"We also understand that if we don't succeed, the Bureau of Reclamation will implement its own approach to stabilize Lake Mead and Lake Powell," Hagekhalil said.

John Entsminger, the general manager for the Southern Nevada Water Authority, told CNN on Monday that he felt other negotiating parties were not acting grasping the gravity of the crisis.

"Frankly, I'm frustrated because the overwhelming sense I've gotten from the negotiations is there aren't enough people taking this seriously enough and understanding this is about adapting to less water in this river," Entsminger said.

With the Colorado River running out of water and time, federal lawmakers also urged Reclamation Bureau officials to act with more urgency.

Democratic Sen. Mark Kelly of Arizona penned a letter to Interior Secretary Deb Haaland Tuesday morning, urging her to "outline the Department's options and legal authorities" to implement its own mitigation measures if states can't do it themselves.

He was joined on Tuesday by US Sens. Catherine Cortez Masto and Jacky Rosen of Nevada, who called on US officials "to take additional federal actions and measures to ensure all Lower Basin states are contributing to the Basin-wide conservation required to meet the severity of this crisis."

Porter told CNN the public finger-pointing from states is a dire sign for progress on negotiations.

It's "all the things you say at the beginning of the negotiation," rather than at the end of it, she said.

"Everyone is in their corners right now," Porter added. "We didn't have any bell ringing today unfortunately. Today not to have any concrete steps at all -- it's concerning because it takes us closer to the really catastrophic scenario of dead pool."