As Afghanistan falls to the Taliban, US groups prepare for a wave of migrants 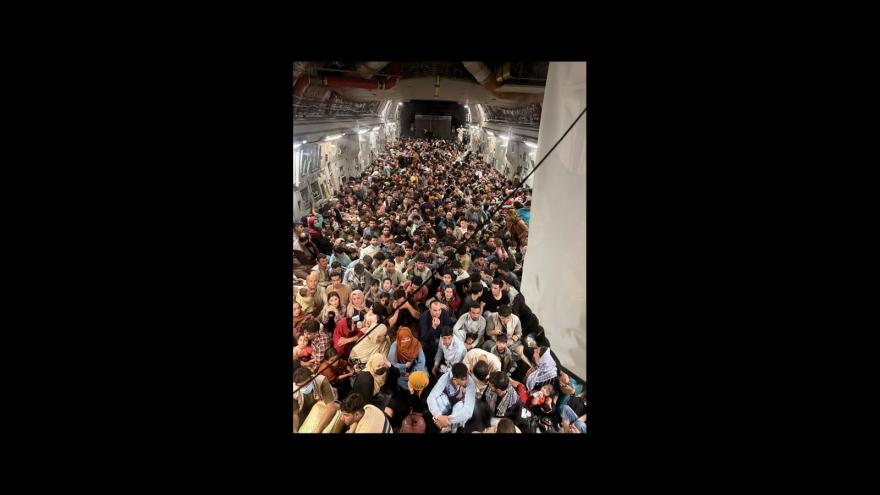 (CNN) -- It's a picture that went viral and stunned people around the world earlier this week: Approximately 820 Afghan refugees packed aboard a US military C-17 plane. Men, women, and children all huddled together as they escape Taliban rule for a new life in the United States.

As Americans watch Afghans desperately flee their country, groups that provide services for refugees are scrambling to help them.

Since President Joe Biden announced in April that the US would withdraw all troops from Afghanistan, refugee advocates have urged the federal government to speed up the immigration process to ensure as many Afghan evacuees as possible can get out safely and quickly.

Getting visas for Afghans trying to leave the country will likely be a lengthy procedure, one that in this case will mostly require Special Immigrant Visas, or SIVs.

It's unclear how many Afghans will arrive in the US. The International Refugee Assistance Project estimated on Wednesday that some 100,000 Afghan SIV applicants and their families are eligible to relocate to the US.

Roughly 2,000 Afghan refugees have relocated so far, a majority to Fort Lee, Virginia. Additionally, there are 20,000 SIV applicants in the pipeline, with about 10,000 of those at the beginning stages of the process, according to the State Department.

The influx of Afghans comes after years of record low admittance caps in the US, which some experts say leaves the system unprepared for this expected wave of evacuees.

Now, refugee support groups dealing with what they say is a weak immigration system, health advisories and a slow visas process are working around the clock to prepare for a traumatized population that will need help adjusting to their new home.

Lutheran Social Services National Capital Area (LSSNCA), a refugee and immigrant resettlement group that serves the Washington, DC, Maryland and Virginia area, has already welcomed 68 Afghan families, about 300 people, according to CEO Kristyn Peck. The group is expecting roughly 160 more people in the next 10 days.

Peck believes that most Afghan evacuees will filter in through Fort Lee for SIV-completion purposes. She says they will ultimately settle in the DC metro area because many of them helped the US government with their missions abroad and have a connection to the country's capital.

"We've been serving Afghan refugees with SIVs since 2002," Peck said. "Last year we served 500 in a year, this year we will have served 500 in the month of August alone."

The group scaled down their operation significantly during the Trump administration, Peck says, and has had to scale it back up very quickly.

While the work has proved challenging, Peck says the LSSNCA has welcomed the help of more than 1,500 volunteers. It has also received 200 boxes of donations.

Many organizations told CNN that they, too, have received an overwhelming number of volunteers in the last two weeks.

"The interest has completely spiked in the last few days," said Holly Taines White, a senior director at Jewish Family & Community Services East Bay (JFCS), which serves people in the San Francisco Bay Area. "Several hundred people have filled out our volunteer form, and there is an explosion of people donating furniture and household items."

Housing one of top priorities

In some instances, the group will temporarily get families an Airbnb. Smaller groups are housed with volunteers, she says.

"It's very chaotic," said Alain Mehta, executive director of Welcome Home. "It's a tough housing market to begin with and rent is high, but we've been trying to capitalize on uninhabited religious spaces, like parsonages."

The organization has been in talks with partner resettlement organizations about Afghan evacuees since January, and its members have been calling US senators to issue more SIVs.

"Months passed, nothing changed, and now you can turn on the news and see what's going on in Kabul," said Mentha.

Welcome Home is relying on donations and volunteers to ramp up its operations ahead of receiving Afghan evacuees, according to Mentha.

Housing is important, but it's not the only priority.

Helping Afghan refugees adjust to their new environment by providing English classes, job training and placement, and teaching them how to ride public transport, are all essential.

Many come in family units and may be reunited with already settled family. But others have no connections, says Russel Smith, CEO of Refugee Services of Texas.

"We do anything to get them acclimated," Smith said. That includes access to government services, healthcare and employment services.

RST saw seven families arrive last weekend, and it expects at least 100 more families once travel arrangements are figured out.

Taines White emphasized that many refugees are deeply traumatized and need mental health care, as they've "literally feared for their lives for years."

"I've heard stories from some of these people saying that they've kept kids indoor for a couple of years," she said. "And for a very good reason. All of them have had threats on their lives. They've seen their friends and families killed."

Michael Breen, CEO of advocacy group Human Rights First, said the US has a responsibility to its Afghan allies.

"As a veteran I can say I owe my life to our Afghan allies," he said Wednesday during a press call. "It's not just interpreters. There are so many people who risked their lives -- children, families -- to keep us safe. And for 20 years American veterans looked our allies in the eyes and made those promises wearing the cloth of the nation."

Taines White echoed this notion. She also expressed concern over anti-immigrant sentiment in the US.

"Our country has an obligation to help these people be safe. They are in danger because they worked along our military or embassy," she said. "We have a moral obligation to take care of them. They need to be here because of actions our country took."