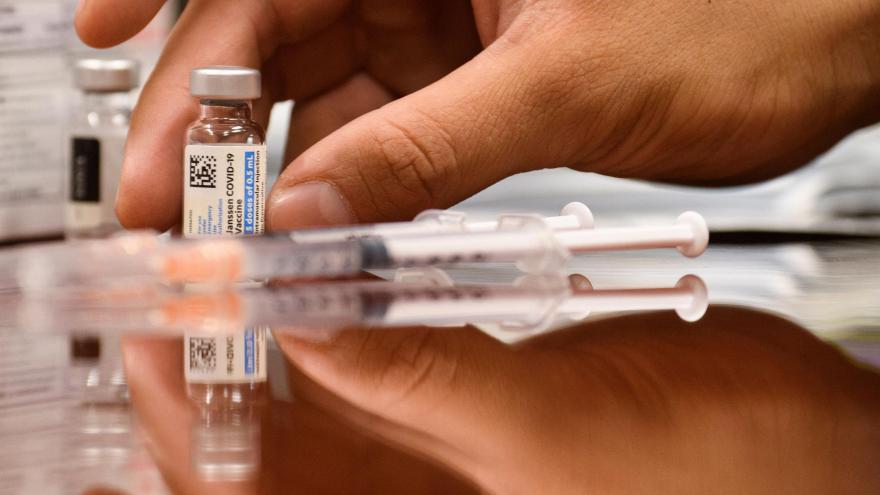 (CNN) -- The calls and emails about Covid-19 boosters have already started coming in to Dr. William Schaffner's medical center in Nashville, Tennessee.

It started last week, when the the the US Food and Drug Administration and US Centers for Disease Control and Prevention recommended an additional dose for certain immunocompromised people who had been given the Moderna or Pfizer/BioNTech vaccines.

Then, on Monday, Biden administration officials said they are working on a plan to recommend more Americans get a booster about eight months after being fully vaccinated with the Pfizer or Moderna vaccines. The question will be addressed during a White House Covid-19 briefing on Wednesday.

But nearly 14 million fully vaccinated people in the United States didn't get one of those mRNA vaccines. They got the single-dose shotfrom Johnson & Johnson, and so far, they are not a part of this booster conversation.

"Our J&J patients have not been overlooked or neglected. It's just the way the data are coming in," said Schaffner, a professor in the Division of Infectious Diseases at Vanderbilt University Medical Center.

For J&J vaccine patients who are calling and emailing about boosters, he is telling them to wait.

"You can't make good recommendations without the data," he said.

The J&J vaccine also appears to provide adequate protection against the Delta variant, the predominant strain of the virus making people sick in the United States today. J&J said in July that a second or booster dose of its vaccine would not be necessary at that time.

However, a spokesperson from Johnson & Johnson told CNN on Tuesday the company is gathering additional data to see if booster shots are necessary.

"Ensuring long-term and durable protection against hospitalization and death are critical in curbing the Covid-19 pandemic,"the company said in an email to CNN. "Johnson & Johnson continues to diligently generate and evaluate evidence from ongoing trials as well as emerging real-world evidence as it assesses the need for a booster of the Johnson & Johnson Covid-19 vaccine."

Many vaccines need more than one shot to provide full protection. Some, like a tetanus shot, need an additional boost every 10 years or so because immunity wanes over time. Others, like the flu shot, need to be administered annually because each flu season bring new strains.

With Covid-19, scientists are still figuring out how long protection lasts and how the vaccines work against different variants. All of that will need to be determined by more research.

For mRNA vaccines, more data is coming in. Pfizer said Monday that it has submitted initial data to support the use of boosters to the FDA. Moderna said last week it's still in the process of submitting its data.

The Johnson & Johnson vaccine works a little differently than the mRNA vaccines, which use a newer technology that delivers genetic material directly into cells via fatty particles. J&J's Janssen vaccine uses a viral vector, a common cold virus that is genetically engineered to infect cells, but won't replicate and spread in the body. It delivers genetic instructions to the cells, then trains them to identify and protect against the coronavirus.

Johnson & Johnson has always been on a different timeline, too. When Pfizer/BioNTech and Moderna were authorized in December, J&J was still gathering data. It got its emergency use authorization a couple of months later, in February.

"We have been reviewing the science and data on a near daily basis to evaluate whether or when boosters may be needed," the CDC said in an email to CNN when asked about boosters for the general public and for the immunocompromised on Tuesday.

"As we have been saying, boosters would probably be needed. We will be announcing more detailed plans soon, so we'll have more to share then. This will all be done in accordance with independent FDA and CDC review and recommendations."

It's also not clear if people who got J&J's vaccine and who need a boost would benefit more from an additional J&J vaccine, or should receive a different vaccine type.

Currently, the CDC's official stance is that people should stick with the shot they got initially. It says there isn't enough data to know if mixing and matching works and is safe.

In parts of Europe, though, doctors are mixing and matching the single dose AstraZeneca vaccine -- which is similar to the J&J vaccine -- with an mRNA vaccine.

In the United States, at least one city didn't wait for data on whether to boost the J&J vaccine.

People vaccinated with the J&J vaccine can get a supplemental mRNA vaccine dose in San Francisco, where Department of Public Health officials made an "accommodation" for those who have consulted with a doctor, the department said August 4.

While Schaffner is enthusiastically encouraging anyone who has not yet gotten a firstshot to get one immediately, for patients who got the J&J vaccine and want a booster, he's counseling patience.

"At the moment, the only thing we can tell them is sit tight," Schaffner said. "More information is on the way."