As a shark latched on to her husband's shoulder, a pregnant woman sprang into action 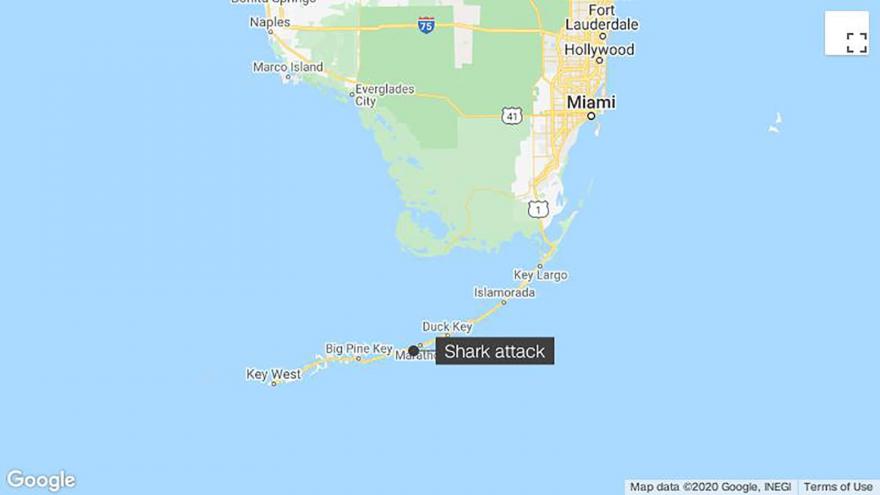 A man was airlifted after he was bitten in the shoulder by a shark.

(CNN) -- Moments after her husband jumped into the turquoise waters of the Florida Keys, Margot Dukes-Eddy saw a shark fin and blood around the area where he had entered the water. Without hesitation, Dukes-Eddy, who is pregnant, leaped into the water and pulled him to safety.

On a family vacation in Florida last week, the Atlanta-based couple, accompanied by Duke-Eddy's parents, sister and her sister's boyfriend, decided to spend the day swimming and snorkeling aboard a private 20-foot motorboat, according to the Miami Herald who first reported the story.

The family set out to explore the marine life of the Sombrero Reef in the Florida Keys, the 125-mile-long chain of islands that begins just south of Miami.

With several other people from nearby boats already swimming in the water, 30-year-old Andrew Eddy didn't hesitate to jump in. Almost immediately after entering the water, a shark -- described by witnesses as an 8- to 10-foot bull shark -- slammed into Eddy and latched onto his shoulder, according to witnesses.

Dukes-Eddy, watching from the boat, immediately sprang into action.

As Deputy Christopher Aguanno wrote in his report for the Monroe County Sheriff's Office, she "saw the shark's dorsal fin and then blood filling the water," and "without hesitation, dove into the water and pulled Eddy to the safety of the boat."

Eddy was immediately taken to Sombrero Beach and then airlifted to a nearby hospital in Miami where the injury to his shoulder was deemed severe, according to the Monroe County Sheriff's Office.

Dukes-Eddy has not responded to a request for comment.

There was no one "fishing or chumming" the water where the group was snorkeling and there were no other reported injuries, Aguanno confirmed.

Monroe County, located around 160 miles southwest of Miami, has had only 17 confirmed and unprovoked shark attacks since 1882, according to the University of Florida's International Shark Attack File -- making this case all the more surprising.