As the Oshkosh school shooting unfolded, a teen opened her mosque doors to shelter fleeing students 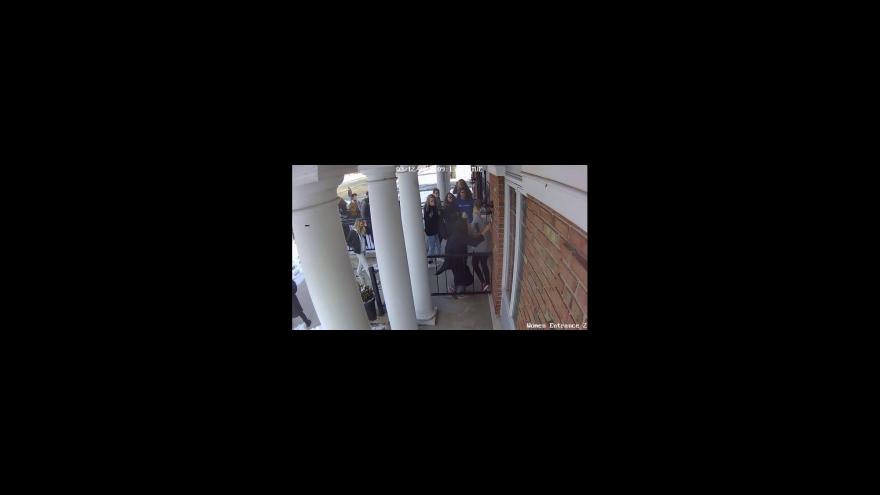 Surveillance video from the mosque shows the moment one of its members, Duaa Ahmad, helped about 100 of her peers to find shelter.

(CNN) -- Thanks to a Wisconsin student's quick thinking, about 100 students were able to take shelter at her mosque during a school stabbing and shooting on Tuesday.

The Ahmadiyya Muslim Community's Oshkosh chapter mosque is across the street from Oshkosh West High School, where police said a 16-year-old student stabbed an officer with an "edged weapon" before being shot by the officer.

Surveillance video from the mosque shows the moment one of its members, Duaa Ahmad, a high school student at Oshkosh West, jumped into action and entered the security code -- opening the mosque for her peers to safely shelter.

Duaa, 17, told CNN she was in her AP English literature class when she said they heard a gunshot, which at the time she thought was just a door slamming shut.

Her teacher asked someone to call 911 and then asked them to get out of the classroom. That's when a peer suggested running to the mosque, according to Duaa.

"A guy yelled, 'go, go to the mosque' and that's where everybody seemed to be going anyway, so I just tried to lock as many people in as I could" after entering the code to unlock the doors, she said.

Saad Ahmad, Duaa's father, is the financial secretary at the mosque and works a few minutes down the road from the school. He told CNN all mosque members have a code to enter the building.

In the moments after the shooting, Saad said, everyone had limited information about what was happening and he couldn't help but feel worried about his daughter's safety.

"It was not a pleasant feeling at all, he said. "I was thinking the worst."

Once Saad talked to Duaa and he found out that she had opened the mosque for her peers, he said he rushed over to help.

"I'm really glad she opened the mosque right away and took the initiative," he said. "I was quite proud of her that she was able to handle this situation at such a young age."

Duaa and Saad estimated there were about 100 students sheltered inside the mosque. The pair made sure everyone knew where the restrooms were, got water and felt comfortable until they were able to reunite with their parents.

Saad said the mosque has their own protocol if something were to happen there, but this was a unique situation since the kids were coming from the high school.

Duaa said she just did what she thinks anybody else would have in her position.

"I was there at the right time in the worst situation," she said.

Both the student and officer were treated at a hospital for non-life threatening injuries, police said. This was the second shooting to take place in a high school in the state in two days.

Oshkosh West has been out since the incident, according to the Oshkosh Area School District, but students will return to their normal schedules Friday.

The Oshkosh Ahmadiyya Muslims Facebook group posted about the Oshkosh incident, praising Duaa for her quick thinking and ended with the sentiment, "our doors are always open."