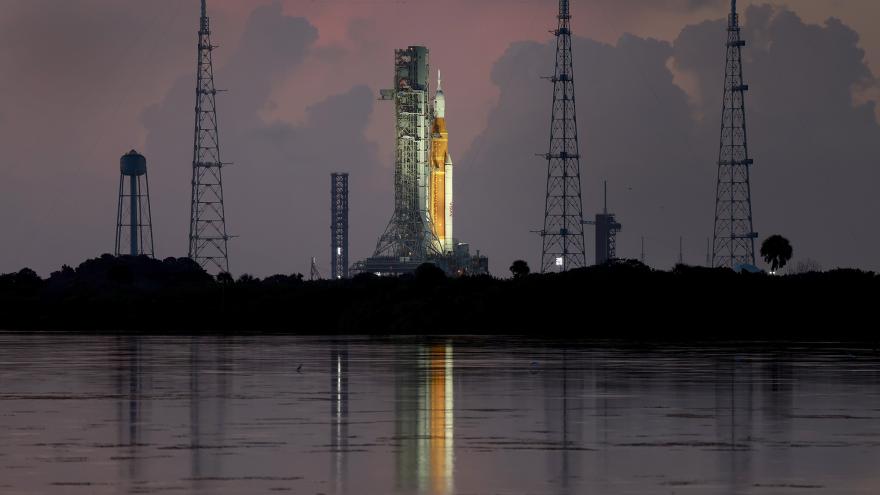 (CNN) -- NASA will not pursue a launch of Artemis I for the remainder of the launch period, which ends on Tuesday, according to an update from the agency after a second scrubbed launch attempt Saturday.

Future launch periods, including those in September and October, depend on what the team decides early next week, but this results in a minimum of delays consisting of at least several weeks.

"We will not be launching in this launch period," said Jim Free, associate administrator for NASA's Exploration Systems Development Mission Directorate. "We are not where we wanted to be."

Free said the stack, including the Space Launch System rocket and Orion spacecraft, has to roll back into the Vehicle Assembly Building, unless they get a waiver from the range, which is run by the US Space Force.

NASA Administrator Bill Nelson reminded that the shuttle was sent back to the Vehicle Assembly Building 20 times before it launched -- and noted that the cost of two scrubs is a lot less than a failure.

"We do not launch until we think it's right," Nelson said. "These teams have labored over that and that is the conclusion they came to. I look at this as part of our space program, in which safety is the top of the list."

The scrub was called at 11:17 a.m. ET, three hours before the beginning of the launch window.

Artemis I had been slated to take off Saturday afternoon, but those plans were scrubbed after team members discovered a liquid hydrogen leak that they spent the better part of the morning trying to resolve. Liquid hydrogen is one of the propellants used in the rocket's large core stage. The leak prevented the launch team from being able to fill the liquid hydrogen tank despite trying various troubleshooting procedures.

Previously, a small leak had been seen in this area, but it became a much larger leak on Saturday. The team believes an overpressurization event might have damaged the soft seal on the liquid hydrogen connection, but they will need to take a closer look.

"This was not a manageable leak," said Mike Sarafin, Artemis mission manager.

It's the second time in a week that the space agency has been forced to halt the launch countdown in the face of technical issues. The first launch attempt, on Monday, was called off after several issues arose, including with a system meant to cool the rocket's engines ahead of liftoff and various leaks that sprung up as the rocket was being fueled.

The liquid hydrogen leak was detected Saturday at 7:15 a.m. ET in the quick disconnect cavity that feeds the rocket with hydrogen in the engine section of the core stage. It was a different leak than one that occurred ahead of the scrubbed launch on Monday.

That troubleshooting plan was not successful. The team attempted the first plan again to warm up the line, but the leak reoccurred after they manually restarted the flow of liquid hydrogen.

There was a 60% chance of favorable weather conditions for the launch, according to weather officer Melody Lovin.

The Artemis I stack, which includes the Space Launch System rocket and Orion spacecraft, continues to sit on Launchpad 39B at Kennedy Space Center in Cape Canaveral, Florida.

The Artemis I mission is just the beginning of a program that will aim to return humans to the moon and eventually land crewed missions on Mars. Nelson said that the issues during the first two scrubs have not caused any delays to future Artemis program missions.

In the last few days, the launch team has taken time to address issues, like hydrogen leaks, that cropped up ahead of Monday's planned launch before it was scrubbed. The team has also completed a risk assessment of an engine conditioning issue and a foam crack that also cropped up, according to NASA officials.

Both were considered to be acceptable risks heading into the launch countdown, according to Mike Sarafin, Artemis mission manager.

On Monday, a sensor on one of the rocket's four RS-25 engines, identified as engine #3, reflected that the engine could not reach the proper temperature range required for the engine to start at liftoff.

The engines need to be thermally conditioned before super-cold propellant flows through them prior to liftoff. To prevent the engines from experiencing any temperature shocks, launch controllers gradually increase the pressure of the core stage liquid hydrogen tank in the hours before launch to send a small amount of liquid hydrogen to the engines. This is known as a "bleed."

The team has since determined it was a bad sensor providing the reading -- they plan to ignore the faulty sensor moving forward, according to John Blevins, Space Launch Systems chief engineer.

Once Artemis I launches, Orion's journey will last 37 days as it travels to the moon, loops around it and returns to Earth -- traveling a total of 1.3 million miles (2.1 million kilometers).

The mannequins, named Commander Moonikin Campos, Helga and Zohar, will measure the deep space radiation future crews could experience and test out new suit and shielding technology. A biology experiment carrying seeds, algae, fungi and yeast is also tucked inside Orion to measure how life reacts to this radiation as well.

Additional science experiments and technology demonstrations are also riding in a ring on the rocket. From there, 10 small satellites, called CubeSats, will detach and go their separate ways to collect information on the moon and the deep space environment.

Cameras inside and outside of Orion will share images and video throughout the mission, including live views from the Callisto experiment, which will capture a stream of Commander Moonikin Campos sitting in the commander's seat. And if you have an Amazon Alexa-enabled device, you can ask it about the mission's location each day.

Expect to see views of Earthrise similar to what was shared for the first time during the Apollo 8 mission back in 1968, but with much better cameras and technology.

The inaugural mission of the Artemis program will kick off a phase of NASA space exploration that intends to land diverse astronaut crews at previously unexplored regions of the moon -- on the Artemis II and Artemis III missions, slated for 2024 and 2025 respectively -- and eventually delivers crewed missions to Mars.