Artemis I moon rocket is a step closer to launch countdown 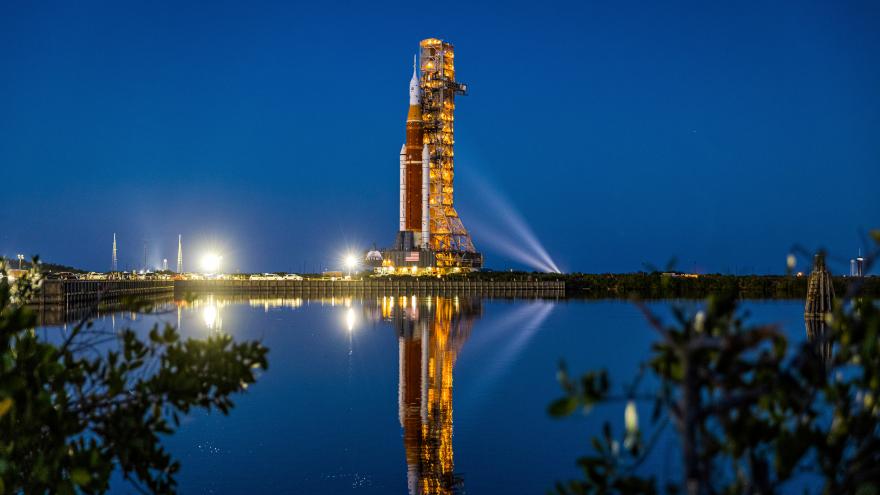 (CNN) -- Amega moon rocket and the Orion spacecraft have finally emerged from their chrysalis and are towering in place at NASA's Kennedy Space Center in Florida.

The most powerful rocket NASA has ever built, the Space Launch System is now ready for a final prelaunch test for the uncrewed Artemis I mission. Known as a wet dress rehearsal, the trial includes loading the fuel tanks and conducting a launch countdown.

Ultimately, the plan is to use the 322-foot (98-meter) rocket to land the first woman and person of color on the moon. The SLS will usher in a new era of deep space exploration.

But even as NASA reaches for the stars, I was struck this week by how much of Earth's surface still remains uncharted and how dramatically it can change without us knowing.

I'm Katie Hunt, standing in for Ashley Strickland in this edition of Wonder Theory.

Marine scientists have discovered deep sinkholes -- one larger than a city block of six-story buildings -- and ice-filled hills that have formed "extraordinarily" rapidly on a remote part of the Arctic seafloor.

Mapping of Canada's Beaufort Sea revealed the dramatic changes, which the researchers said are taking place as a result of thawing permafrost submerged underneath the seabed.

It's the first time subsea permafrost has been tracked in this way, and scientists said it was surprising to see changes like these occurring in such a short span of time -- less than a decade.

Permafrost is a frozen layer of earth, and it covers a quarter of the Northern Hemisphere, including under the sea. Large swaths of permafrost were submerged as glaciers melted and sea levels rose at the end of the last ice age, around 12,000 years ago.

On land, warmer temperatures have led to radical shifts in the Arctic landscape in recent years. Human-caused climate change, however, didn't induce these shifts in the seabed, the researchers said.

When a pack of giant hornets attacks a honeybee hive, the slaughter is brutal and quick. The marauders -- sometimes described as murder hornets -- can decimate a hive in hours.

While Asian bees have adapted to protect themselves from the predatory hornets, North American bees have not.

Researchers in China have found a way to lure the hornets into traps -- potentially stopping the spread of the invasive species. Their secret weapon might surprise you. Hint: It involves the game of attraction.

Allergies are far more than a sneezy seasonal annoyance -- hay fever can be super disruptive to everyday life. It's also a problem that's being exacerbated by the climate crisis.

By the end of the century, the pollen season could begin as much as 40 days earlier than it has in recent decades in the US because of climate crises, according to new research. Annual pollen counts could climb by up to 250%.

Ewww. It turns out your kitchen sponge can grow bacteria better than a petri dish in a lab.

A sponge's spatial partitioning -- the way it's divided into different sectors of various sizes -- means it's a paradise for bacteria that thrive in secluded spaces, according to a new study.

The aim of the research is to help scientists better understand habitats favored by microbial communities that could produce chemicals of medicinal value, but they did share some tips on how to keep your kitchen sponge relatively germ-free.

The astronauts on board the International Space Station are defying gravity ... and politics.

The first spacewalk of the year took place outside the space station on Tuesday, while on Fridaythree new Russian crew members were welcomed aboard, joining the four Americans, one European and two Russians already there.

With Russia's invasion of Ukraine, the cosmonauts' arrival at the space station comes at a time of mounting geopolitical tensions that have seen formerUS astronaut Scott Kelly clash on Twitter with the head of Roscosmos, the Russian space agency.

Such attacks are "damaging" to the space station's mission, a NASA official has warned. The agency said it's still working closely with Roscosmos, and NASA astronaut Mark Vande Hei will "for sure" return from the ISS later this month aboard a Russian Soyuz spacecraft, as previously planned.

-- Underneath Notre Dame cathedral in Paris, archaeologists have made a surprising discovery that could date to the 14th century.

--A new species of armored dinosaur has been unearthed in southwestern China, and it has similar features to a porcupine.

-- Rest easy. NASA's asteroid surveillance net got to flex its muscles in real time this week -- and it's doing its job.

Like what you've read? Oh, but there's more. Sign up here to receive in your inbox the next edition of Wonder Theory newsletter, brought to you every Saturday by CNN.