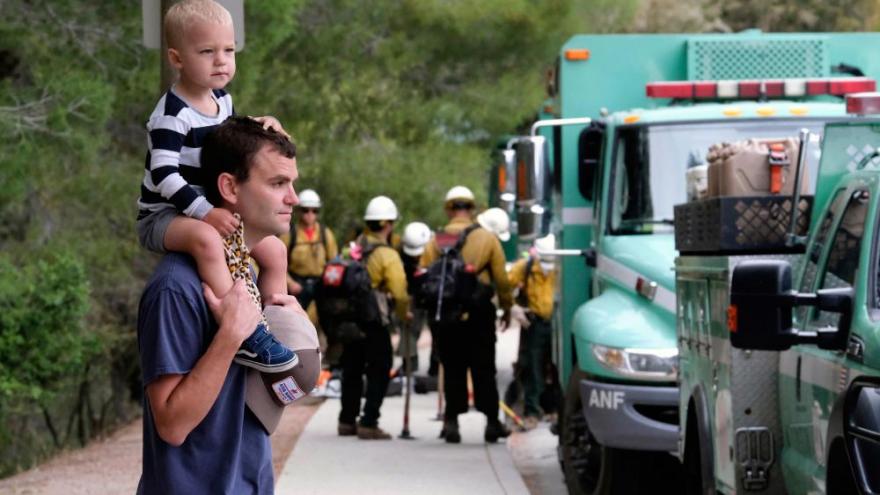 Pacific Palisades resident Mike Sutton, 31, and his son, Tommy, 2, watch the deployment of firefighters on May 16.

The suspect has been identified as Ramon Santos Rodriguez, 48, a homeless man, according to the Los Angeles Police Department.

Rodriguez was arrested on Sunday afternoon, said LAPD Officer Lizeth Lomeli. According to county inmate information, he was booked on Monday on an arson charge.

It is not clear when Rodriguez will be in court or if he has legal representation yet.

Officials said firefighters made progress against the fire, and evacuation orders were lifted for the Topanga Canyon area. The fire, which started late Friday about 20 miles west of downtown Los Angeles, prompted the evacuation of about 1,000 residents.

The fire has burned 1,325 acres and is about 23% contained, Los Angeles County Fire Department officials said Monday night, up from 0% containment in the morning.

One firefighter suffered a minor injury to his eye, fire officials said.

No structures have burned but officials said Monday night there are 785 structures threatened by the blaze.

Some drizzly rain in the area and an inversion layer have helped prevent the fire from spreading, the mayor said earlier. That marine layer tends to trap heat, and Garcetti warned that once the clouds lift, typically in the afternoon, flames have the potential to take off rapidly.

Authorities could not say when the full containment of the fire was expected.

California has been in a massive drought for weeks, and experts worry it will only get drier and hotter, creating the potential for another devastating wildfire season.

On Saturday morning, LAFD helicopter pilots observed a man moving around in the brush along a steep hillside near the fire. The LAPD air patrol was dispatched to monitor the individual, and during aerial observation, the individual was seen ignite multiple additional fires, the LAFD said in a news release .

Deputies were lowered into the brush to apprehend him, but because the fires were growing rapidly, they were forced to retreat. On Sunday, the man emerged from the brush and was recognized as the possible suspect by a private security officer, who notified the LAPD and LAFD. Police officers arrived and detained the suspect 36 hours after the fire began, according to the release.

At a news conference Monday, officials announced the suspect was receiving medical attention for smoke inhalation.

The Los Angeles Fire Department had previously said there was a "suspicious start" to the fire, and on Saturday briefly detained and then released a different person. Fire Chief Ralph Terrazas expressed confidence Monday they had the correct suspect now in custody.

"It is an active investigation," he said. "I can't give you more details than that, but the person in custody -- we feel we have the right person."

More than 500 firefighters are combating the flames in a challenging canyon terrain that's filled with 20-30 foot brush that hasn't burned in about 75 years, Garcetti said.

Roughly 300 firefighters battled the blaze over the weekend, Ortiz said.

"There's a lot of dense, thick material there, oily plants that have dried out because of the drought," Ortiz said Sunday. "So, that's our objective today: to try to keep it out of that and protect the communities and neighborhoods that are to the west of this fire because that's what's closest to it."

Those drought conditions, coupled with the gusty winds the area is expected to see in the coming days, will likely pose some of the biggest challenges in containing the fire.