Arrest warrant issued for Odell Beckham Jr. after he appears to swat man in uniform at Superdome 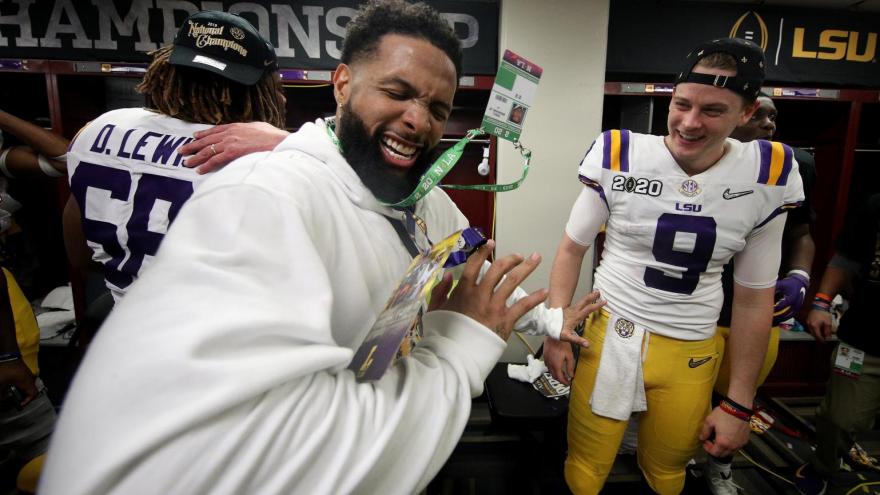 Odell Beckham Jr. celebrates in the locker room Monday as quarterback Joe Burrow looks on. The New Orleans Police Department has obtained an arrest warrant for the Cleveland Browns star wide receiver on a charge of misdemeanor simple battery.

The warrant stems from a Monday incident at the Mercedes-Benz Superdome, where the 27-year-old was on hand to see his alma mater, LSU, win college football's national championship over the Clemson Tigers.

Police provided no further information, but video from inside the locker room shows Beckham apparently striking a man in uniform in the buttocks area during postgame celebrations. It is not clear whether the man is a security guard or law enforcement officer.

The Superdome filed the complaint with the NOPD on Tuesday, police spokesman Gary Scheets said. Asked whether the arrest warrant was related to the video, which was widely shared on social media, Scheets said, "Judge for yourself."

Superdome spokesman Alan Freeman declined to provide details, issuing a statement on behalf of venue management company ASM Global: "We are aware of the video from the LSU locker room and are conducting an internal investigation and will have no further comment until that investigation is complete."

He referred requests for additional information to New Orleans police.

The Browns have been in touch with Beckham and his representatives about the matter, team said in a statement.

"They are cooperating with the proper authorities to appropriately address the situation," it said.

CNN has reached out to Beckham about the incident.

Video posted to social media shows the man in uniform confronting LSU offensive lineman Damien Lewis about a burn mark on the floor when Beckham walks up behind the man and seemingly swats him on the backside.

The man turns around but does not otherwise engage, as Beckham makes finger guns and sings "Get the Gat" by New Orleans rapper Lil Elt, which had been playing earlier in the locker room. Beckham then turns around to speak to someone else. The video ends, and it isn't clear what happened thereafter.

The former LSU wideout was already under scrutiny for his postgame antics.

He was captured on video giving cash handshakes to wide receivers Justin Jefferson and Jontre Kirklin on the sideline. Heisman Trophy-winning quarterback Joe Burrow told a podcast that he, too, received money from Beckham.

The incident may be a violation of college football rules because players are not allowed to accept cash, according to NCAA bylaws.

"Initial information suggested bills that were exchanged were novelty bills. Information and footage reviewed since shows apparent cash may have also been given to LSU student-athletes," the department said in a statement.

The NCAA had no comment about the cash, and Beckham could not be reached.