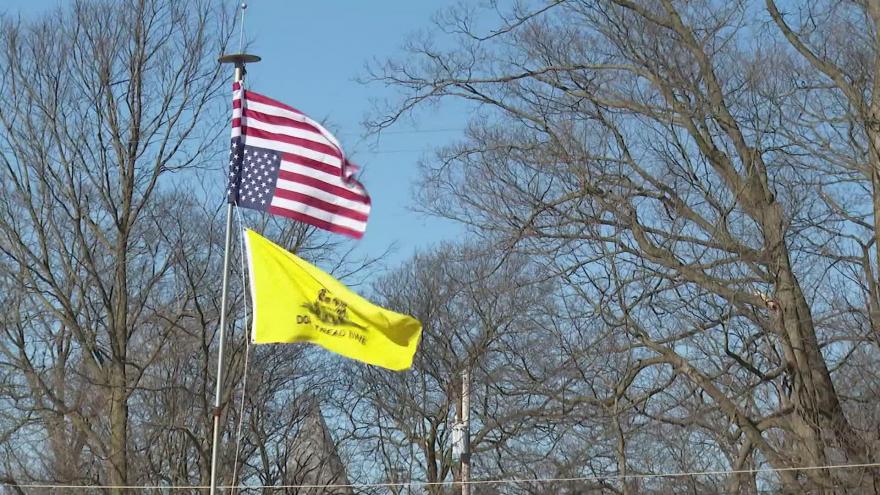 An upside-down Stars and Strips and a "Don't Tread on Me" Gadsden flag suggest anti-government feeling in Woodstock, Ohio.

(CNN) -- In her Ohio hometown, she's known as an Army veteran who runs a bar and set up a small self-styled militia her boyfriend says she created to help neighbors if tornadoes hit.

To the FBI, she's a militant leader who traveled to Washington, DC, and stormed the US Capitol, encouraging others to do the same.

The two worlds of Jessica Watkins crashed into each other in the small village of Woodstock, Ohio, when FBI agents turned up early one morning to arrest her for her alleged role in the January 6 insurrection.

"We could hear so many sirens. And then we heard them yelling for her to come downstairs with her hands up and she did not," said Emma Dixon, who witnessed the pre-dawn raid from a home across the street.

Watkins was seen on video taking part in the insurrection that is linked to the deaths of five people and that terrified lawmakers, who were forced to run to hiding places, fearing for their lives.

When the FBI arrived in Woodstock, Watkins was not there. Her boyfriend, Montana Siniff was. He told CNN disorientating flash-bangs were used.  A window was broken. It remained that way days later.

FBI agents questioned him and eventually left, he said. In a complaint filed in court, federal prosecutors said agents recovered what "appears to be directions for making explosives, authored by 'the Jolly Roger.'" Jolly Roger is also the name of Watkins' bar and a Facebook account believed to be linked to her, authorities say.

"That is entirely false. She hates explosives. There is no moral or lawful way to really make use of explosives as a regular citizen," Siniff said.

Watkins, 38, is now detained at the Montgomery County Jail, about 50 miles away in Dayton, after she handed herself in to authorities last Sunday.

Records show Watkins served in the Army under a different name from April 2001 to December 2003. She was deployed to Afghanistan from September to December 2002.

Watkins is accused, along with two other military veterans, of a multitude of charges: conspiracy, conspiracy to impede an officer, destruction of government property, obstruction of an official proceeding, entering a restricted building or grounds without lawful authority, and violent entry or disorderly conduct on Capitol grounds.

The three veterans were the first to face conspiracy charges, some of the most severe charges so far for those who breached the Capitol on January 6.

CNN has found a disproportionate number of people charged in the Capitol attack are former members of the military.

'The most beautiful thing'

No one disputes that Watkins went to the Capitol to protest against the certification of President Joe Biden's election win. She is seen on video bragging about it while inside the Capitol building.

Her boyfriend said she went to "help protect some Trump VIP members within the rally," but he did not know whom.

After breaching the Capitol, Watkins described the scene inside the building as she saw it.

She told the Ohio Capital Journal: "To me, it was the most beautiful thing I ever saw until we started hearing glass smash. That's when we knew things had gotten really bad."

She added: "It was some people hijacking what started off as a peaceful movement."

But the words on her Parler account after the breach offer a very different perspective. They are highlighted in the federal complaint against her.

"Yeah. We stormed the Capitol today. Teargassed, the whole, 9. Pushed our way into the Rotunda. Made it into the Senate even," she wrote.

Another post from Watkins used as evidence by the FBI said: "We never smashed anything, stole anything, burned anything, and truthfully we were very respectful with Capitol Hill PD until they attacked us.  Then we stood our ground and drew the line."

Watkins and many others came to Washington trained in warfare, some wearing their combat gear of ballistic helmets, Army fatigues and goggles.

Videos showed one group of more than a dozen people, in formation, hands on each other's shoulders, marching up the Capitol steps.

Federal prosecutors say Watkins and others used the Zello phone app, which works like a walkie-talkie, to communicate and plan the assault.

Watkins has yet to have an attorney assigned to her. But her boyfriend did talk on her behalf. The two own the Jolly Roger bar together. They are both members of the group she "commanded" called the Ohio State Regular Militia. "She's not a violent person," Siniff told CNN. "She can be very spirited, but she is a very good person at heart and she just really wants to try to help people."

But law enforcement and many of the lawmakers inside say the rioters that breached the Capitol put lives in danger.

Siniff said Watkins formed the militia to help victims of tornadoes when local authorities were absent or overwhelmed.

There's a long history of paramilitary groups setting themselves up in rural areas of Ohio, Michigan and elsewhere, and the FBI says sometimes there is a darker side.

Watkins is a member of the Oath Keepers, a pro-Trump, far-right, anti-government group that considers itself part of the militia movement charged to protect the country.

There is no private citizen militia that exists in the US. A militia has to be sanctioned by the state.

The Oath Keepers are clear that they try to recruit members from among active or retired military, first responders and  police, and its name refers to the oath taken to "defend the Constitution against all enemies, foreign and domestic."

In court documents the FBI says, "Oath Keepers will violate federal law if they believe their cause is just."

Watkins' alleged co-conspirators are named by the FBI as Donovan Crowl, a former Marine, and Thomas Caldwell, who served in the Navy.

Crowl lives just down the street from Watkins' Jolly Roger bar and was a regular there.

Neighbors told CNN that Watkins would try to recruit people when they came into the bar. Most didn't take her up on it. But Crowl did join Watkins and Siniff in their armed group.

"When drunk, he's the guy you want to shut up.  When sober the best man you could have," Siniff said of the former Marine. "The militia was a good thing to help him ... like it was a reason to be sober."

CNN has reached out to Crowl's attorney but has not received a response.

Crowl's criminal record shows charges for domestic abuse and drunk driving, some of which resulted in conviction. This was noted by the federal judge when his attorney tried to get him released before his trial. His attorney said he merited release as he was not a danger to society.

"He's seen on video saying, 'we overran the Capitol,' his criminal history includes violence and alcohol offenses, he also demonstrated prior non-compliance. The suggestion to release him to a residence with nine firearms is a non-starter," Judge Sharon Ovington said. Crowl was remanded back into custody awaiting a preliminary hearing in Ohio.

"It felt like he did a 180-degree turnaround, felt like the world owed him a living and had a big chip on his shoulder," Rowe said. "I don't know if it's because life didn't go the way he planned."

Asked why she thinks Crowl may have been drawn to this extremist group, she said, "I would like to understand myself. I don't get it."

Caldwell, the third veteran named as a co-conspirator, lives in a secluded property down a country road in Berryville, Virginia, 400 miles from the Woodstock homes of Watkins and Crowl.

It is unclear how long Caldwell knew Crowl and Watkins.  But the FBI says they met up in Washington, DC. Crowl took video of himself and Watkins inside the Capitol and posted it on social media.

Outside the Capitol Caldwell made his feelings clear on January 6.

"Everyone single b**** in there is a traitor, every single one," he screamed in a video, appearing to refer to the legislators inside.

Caldwell was a name in his local Virginia political circles. He was a delegate to the Clarke County, Virginia, Republican convention last year.

A lawyer temporarily assigned to Caldwell said at a detention hearing that his opposition to Biden's election win was not out of the ordinary, and that he was not accused of a violent crime.

But the judge disagreed: "The conduct and statements of Mr. Caldwell and the others, it really is just pure lawlessness," Magistrate Judge Joel Hoppe of the federal court in Harrisonburg, Virginia, said on Tuesday.

The village of Woodstock is home to about 300 people. Many of the homes are clustered around the crossroads, and the only traffic signal still fly "Trump 2020" banners.

There is also the "Don't Tread on Me" or Gadsden flag of the American Revolution and a Stars and Stripes being flown upside down -- a signal of "dire distress," according to the US code.

Some of the villagers were hostile to our CNN crew, calling the local sheriff to complain twice. Others were happier to talk and argued with their neighbors to back off.

And even after all the video and social media posts showing Watkins ranting about storming the Capitol, Watkins's boyfriend defends her.

"I do not believe the charges of conspiracy are at all fair," Siniff said.