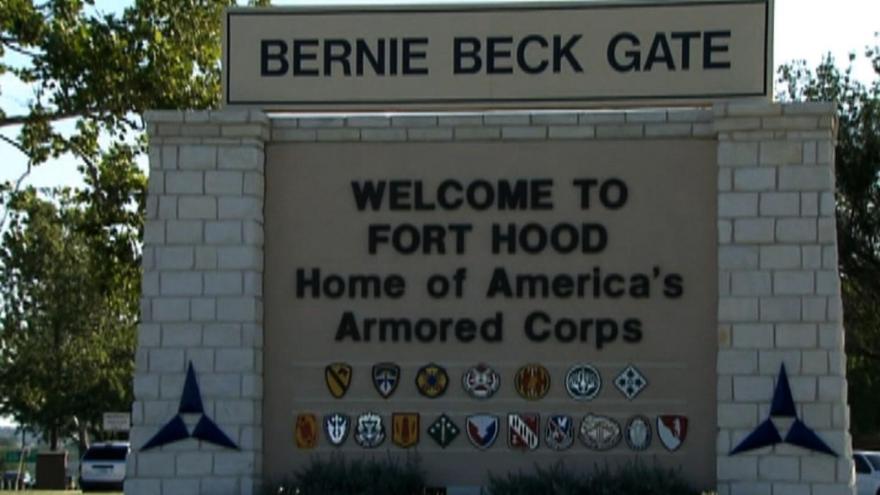 The Army punishes 14 senior officers after murder and other deaths at Ford Hood.

(CNN) -- The Army announced Tuesday that 14 senior officers will be punished following a probe that was initiated after the murder of a soldier and several other deaths at the Army's Fort Hood base in Texas this year.

"I directed the relief and or suspension of commanders and other leaders from the corps to the squad level," he said, saying 14 senior officers "have been relieved of suspended from their positions."

The decision marks one of the largest disciplinary actions even taken by the service, an Army official told CNN Tuesday, underscoring the seriousness of the problems at Fort Hood and broader concerns related to how the military as a whole is grappling with issues of sexual assault, harassment and violence within its ranks.

The military's own investigation is continuing and it's possible more formal disciplinary action could be taken against the officers.

The independent review was ordered after the death of Vanessa Guillen, a 20-year-old soldier, whose remains were discovered in a shallow grave in late June, months after her disappearance in April. It was later determined she had been bludgeoned to death with a hammer in the armory where she worked and her body was moved by her killer who then killed himself before he could be apprehended.

Officials had named the main suspect in Guillen's disappearance as Spc. Aaron David Robinson. According to US Army Criminal Investigation Command, the 20-year-old suspect killed himself on July 1, after police confronted him.

The murder of Spc. Vanessa Guillen "shocked our conscious and brought attention to deeper problems," McCarthy said on Tuesday.

"The initial investigation into Vanessa's death, coupled with high numbers of crimes and deaths at Fort Hood, has revealed a series of missteps and multiple failures in our system and within our leadership," he added.

The outside independent review unveiled on Tuesday details deep concerns about the culture at the base, which has a population of over 60,000, including nearly 37,000 service members.

It suggests top generals and senior enlisted personnel are not paying enough attention to the welfare of the troops, outlining specific concerns about how searches for soldiers who have gone missing as well as sexual assault and sexual harassment cases have been handled.

'A deficient climate' at the base

The Fort Hood Independent Review Committee, which was tasked with examining the culture and climate at the Army post, found "a deficient climate" there, including "ineffective implementation of the Sexual Harassment/Assault Response and Prevention (SHARP) program that resulted in a pervasive lack of confidence, fear of retaliation, and significant underreporting of cases, particularly within the enlisted ranks," according to the Pentagon.

Fort Hood leadership knew or should have known of the high risk of harm to female soldiers, according to the report.

"During the review period, no Commanding General or subordinate echelon commander chose to intervene proactively and mitigate known risks of high crime, sexual assault and sexual harassment. The result was a pervasive lack of confidence in the SHARP Program and an unacceptable lack of knowledge of core SHARP components regarding reporting and certain victim services," it says.

"Soldiers assaulting and harassing other Soldiers is contrary to Army values and requires a dramatic change in culture," Chris Swecker, the committee chair, said. "The committee determined that, during the time period covered by our review, there was a permissive environment for sexual assault and sexual harassment at Fort Hood. We have recommended changes to the staffing, structure and implementation of the SHARP program at Fort Hood, and possibly beyond, to address deeply dysfunctional norms and regain Soldiers' trust."

"FHIRC members also concluded that Fort Hood and the Army as whole must do more to cultivate a culture of inclusivity and respect which values the contributions of all service members," it said.

The top Republican and Democrat on the Senate Armed Services Committee issued a joint statement Tuesday applauding the committee's work to highlight issues at Fort Hood but said the findings make clear the base still faces significant challenges, particularly in its implementation of the SHARP program.

"First, we are encouraged that the Army is taking steps to demand accountability of its leaders at every level, through leadership changes and disciplinary action. The fact of the matter is, many of the problems stem back to egregious mistakes made by the chain of command that created an unacceptable environment for soldiers at Fort Hood, especially for female soldiers," the panel's GOP chairman, Sen. Jim Inhofe, and top Democrat, Sen. Jack Reed wrote.

"What's worse is leaders weren't held accountable. When that happens, the process breaks down. Fixing this problem is the right first step," they added. "We must restore our soldiers' faith and trust in their commanding officers, their unit and their service."