Army medic who received Medal of Honor dies at 41 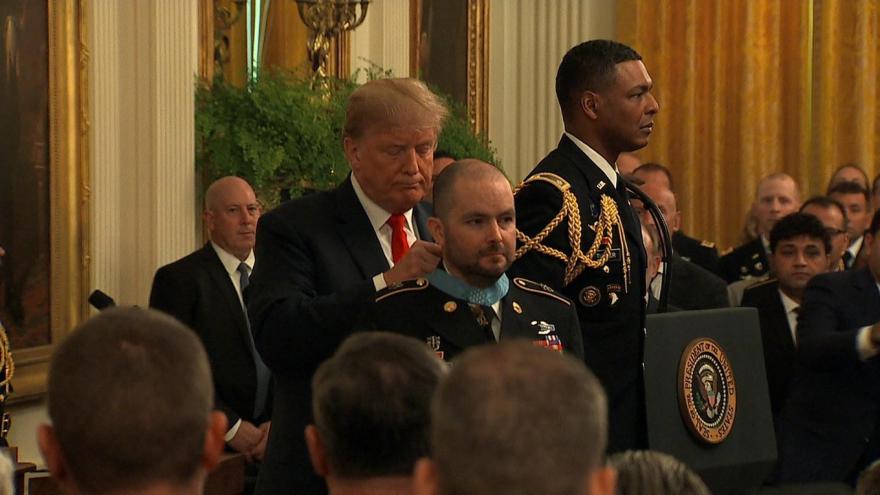 A retired Army staff sergeant who received the Medal of Honor in 2018 for his treatment and evacuation of fellow US soldiers while taking fire from enemy combatants in Afghanistan has died, his wife confirmed.

(CNN) -- A retired Army staff sergeant who received the Medal of Honor in 2018 for his treatment and evacuation of fellow US soldiers while taking fire from enemy combatants in Afghanistan has died, his wife confirmed.

Former Army medic Staff Sgt. Ronald Shurer II died on Thursday morning at Sibley Memorial Hospital in Washington, DC, due to lung cancer, his wife Miranda Shurer told CNN. He was 41 years old, and had been diagnosed in February 2017, she said.

Shurer received the Medal of Honor in 2018 from President Donald Trump in recognition of his bravery in 2008.

"I just hold on to what an amazing man he was," Miranda Shurer said in an interview.

Ronald Shurer and his team were engaged in heavy combat when he braved enemy fire to treat a wounded soldier, according to a statement from the White House prior to his receiving the medal. Shurer then fought his way to another group of four more wounded solders who he treated and stabilized before evacuating the group down a mountainside while using his body to shield them from enemy fire.

"After he loaded the wounded in the evacuation helicopter, he retook control of his commando squad and rejoined the fight," the statement continued. "Then-Staff Sergeant Shurer's heroic actions saved the lives of his teammates."

The Medal of Honor is the most prestigious decoration in the US military. Recipients of the award must have demonstrated "incontestable proof of the performance of the meritorious conduct, and each recommendation for the award must be considered on the standard of extraordinary merit."

Shurer was honorably discharged in 2009 and joined the US Secret Service's Counter Assault Team. In 2014, he was assigned to the Special Operations Division.

The US Secret Service offered respects for Shurer on Thursday.

"Today, we lost an American Hero: Husband, Father, Son, Medal of Honor Recipient - Special Agent Ronald J. Shurer II," the agency tweeted. "From a grateful Nation and Agency - your memory and legacy will live on forever. Rest In Peace."

Shurer is survived by his wife Miranda, 39, and two sons -- Cameron, 12, and Tyler, 9. Due to current Covid-19 restrictions, a ceremony with full honors at Arlington Cemetery will be planned for a later date, Miranda Shurer said, adding that "we want to make sure that when we do the services for him, they can be shared with everybody who loves him."

While it feels surreal, she said, "to go through losing my husband and it being news that everybody knows, I think it's great that the whole world got to know a little bit about him and love him and appreciate him for who he is."

"And so I do really appreciate everybody who cares and is reaching out at this time," she added.