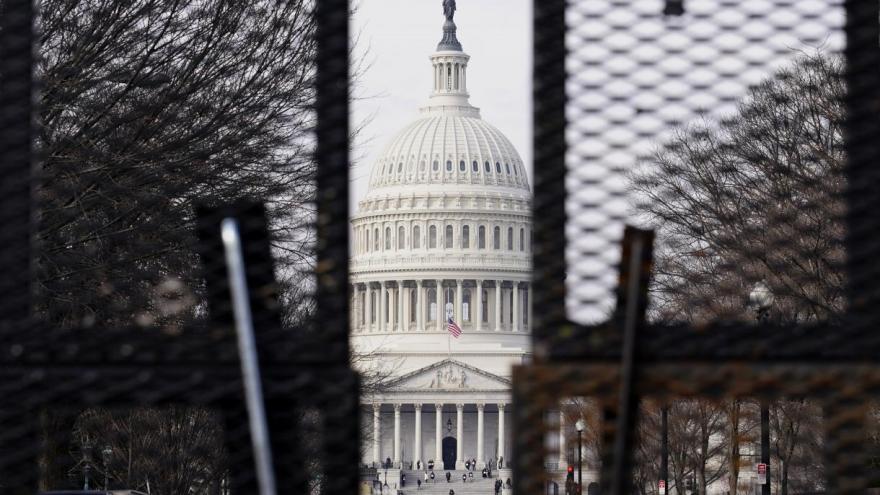 Security surrounds the U.S. Capitol in Washington, Friday, Jan. 15, 2021, ahead of the inauguration.

(CNN) -- Law enforcement and state officials are on high alert for potentially violent protests in the lead-up to Inauguration Day, with some state capitols boarded up and others temporarily closed ahead of Wednesday's ceremony.

The FBI says it has received information warning of "armed protests" in all 50 state capitols beginning Saturday and the US Capitol in Washington, DC, beginning Sunday, ahead of President-elect Joe Biden's swearing-in.

Domestic extremists pose the most likely threat to the inauguration, particularly those who believe the incoming administration is illegitimate, according to a joint bulletin from the Department of Homeland Security, FBI and eight other agencies and obtained by CNN.

The assessment, dated January 14, provides a breakdown of additional concerns leading up to Tuesday, including possible violence.

"In light of the storming of the US Capitol on 6 January, planned events in Washington, DC, in the lead up to and day of Inauguration Day offer continued opportunities for violence targeting public officials, government buildings, and federal and local law enforcement," it reads.

FBI Director Christopher Wray said Thursday that authorities are "tracking calls for potential armed protests and activity leading up to the inauguration" and "monitoring all incoming leads."

The Department of Homeland Security said Friday that Biden's inauguration rehearsal would be delayed one day to Monday due to online chatter about Sunday, but said there are "no specific credible threats."

"It is going to take place on Monday is the current schedule. Secret Service is in charge of running that schedule, but that's done in partnership with Biden team. And it was their decision to delay a day," Acting Homeland Security Deputy Secretary Ken Cuccinelli told CNN's "New Day."

"The decision was made to delay a day and leave the Secret Service in a position, and the whole team across the Washington metro area, to be prepared to respond on that day if needed," he said.

Biden said "yes" when asked if he felt safe about Inauguration Day, based on the intelligence he has seen, when exiting a televised address to the country Friday afternoon.

Washington police said they were receiving daily FBI briefings on internet "chatter" of possible protests around the inauguration.

MPD is coordinating with the FBI and briefing DC Mayor Muriel Bowser daily on all threats, Contee said.

On Friday evening, US Capitol Police arrested a Virginia man as he attempted to pass through a police checkpoint in downtown Washington, DC with unauthorized inaugural credentials, an unregistered handgun and more than 500 rounds of ammunition, according to court documents.

The man, identified as Wesley Allen Beeler, pulled his pickup to a police checkpoint just north of the Capitol, according to a law enforcement source briefed on the situation. Beeler, from Front Royal, Virginia, presented officers with what was described as an unauthorized inauguration credential.

When police asked Beeler if he was carrying any weapons, he told them he had a semi-automatic pistol in the center armrest, according to the court document.

Police recovered the pistol, as well as 509 rounds of ammunition, shotgun shells and a magazine for the handgun, according to an incident report from the Metropolitan Police Department. Beeler was arrested and charged with possession of an unregistered firearm and possession of unregistered ammunition, among other offenses, the report said.

In an interview with the Washington Post, Beeler said he'd been working security in downtown DC for the past week for MVP Protective Services and had been given credentials to "guard media equipment located at Seventh Street and Constitution Avenue NW. He said the credential he was given had previously been enough to enter that area," the paper reported.

Beeler said he'd forgotten that he had his weapon in his vehicle, and he has a license to carry in Virginia.

"It was just me forgetting to take it out of my truck before I left for work. I don't know what the D.C. laws are. It still comes back on me, but I'm not a criminal," he said, according to the Washington Post.

Bowser said she did not expect the continued presence of visiting National Guard troops after the inauguration but the city will have to take on a "new posture."

She again urged Americans to enjoy the inauguration from home and asked anyone who does not need to be out to avoid restricted areas.

The National Mall will be closed to the general public on Inauguration Day, the National Park Service (NPS) announced Friday.

The temporary closure began Friday morning and will extend through at least Thursday, January 21. The NPS says protests will be allowed in designated locations and will be limited to those with permits.

The US Postal Service, as it did four years ago, has removed or locked many blue street mailboxes in the nation's capital. But this year the Postal Service has taken similar measures in cities in almost 20 other states, the agency said.

In Washington, lawmakers are asking for help from travel companies to prevent an attack and investigate the January 6 insurrection.

The House Oversight Committee sent letters Thursday to more than two dozen operators of bus lines, rental car companies, and hotels asking for assistance "identifying and preventing the ongoing and extreme threat of further violent attacks in Washington, DC, and elsewhere, over the coming days."

The letter asks the companies to increase security and screening of guests and keep business records available for future investigations, as well as provide Congress with records of any policies "currently in place or being developed to ensure that your services are not used to facilitate violence or domestic terrorism."

The letter cited Airbnb's cancellation of all DC reservations around the inauguration Wednesday as an example of a company that had "voluntarily taken action to prevent domestic terrorists from using their services to support further violence."

One of the companies sent the letter, Megabus, said Friday on Facebook that it was canceling service to Washington until after the inauguration.

Facebook said Friday evening that it would prevent repeat violators of its policies from streaming live videos or creating events, groups or pages through Inauguration Day.

In addition, Facebook is banning the creation of new event pages tied geographically to Washington and state capitols, the company announced in a blog post.

The move is intended to "further prevent people from trying to use our services to incite violence," Facebook said.

'Every state' supporting inauguration with guardsmen

"Every state, territory and the District of Columbia will have National Guard men and women supporting the inauguration," the statement said.

As of Thursday, there were 7,000 Guardsmen in DC from more than a dozen states and the DC National Guard. That number will more than triple in the next few days.

Major Gen. William J. Walker, Commanding General for the District of Columbia National Guard, said guardsmen on duty knew they would be in the capital city until at least January 24.

Walker dismissed suggestions that the guardsmen's presence at the Capitol made it look like a war zone.

"This is not a war zone, and anybody who's been in a war knows that this is not a war zone. What you have here is a community-based organization, it's part of the United States military, the Guard, but we are citizen soldiers and airmen, and we represent the communities we serve in," he said.

"But most of all, Americans should be assured that the Guard is out here in support of the lead federal agency -- the United States Secret Service -- and that the 59th Presidential Inauguration will be peaceful," he said.

The FBI warning that armed protests are planned in all 50 states has prompted governors and police chiefs to deploy thousands of officers and equipment at capitols around the country.

The FBI bulletin noted that extremists could zero in on government officials and institutions, as well as racial and religious minorities, journalists, and the LGBTQ community.

Kentucky Gov. Andy Beshear, a Democrat, will not be in Washington for the inauguration, citing warnings from the FBI and other agencies of "credible threats of potential domestic violence and terrorism" in his home state, Crystal Staley, a spokeswoman for the governor, said via email Saturday.

Florida and Maine have also activated the National Guard to work with state law enforcement.

Kentucky and Texas Friday announced that the grounds around their capitols will be closed temporarily.

The Michigan State Police is mobilizing personnel from across the state to secure the Capitol ahead of planned protests, including one on Sunday, the agency said in a statement Friday.

Lansing Mayor Andy Schor urged people to "avoid coming to the Capitol and surrounding area" because of demonstrations expected on Sunday.

"Downtown Lansing residents should consider planning ahead to stay inside and avoid this demonstration," the mayor said in a statement.

"I am asking residents and those who live in the Lansing area to stay out of the downtown area and to not engage with demonstrators who come to our city with ill intentions."

Michigan's attorney general has warned that the Capitol was not safe due to the expected presence of armed militia members. It is legal to carry firearms in the open in the state.

In Virginia, a state of emergency has been declared in Richmond and Capitol Square will be closed. The state is anticipating a gathering Monday for "Lobby Day," an annual protest that last year brought thousands of gun rights advocates to the Capitol.

In Oregon, the FBI has set up a command post to gather and share intelligence with law enforcement.

In Florida and Oklahoma, lawmakers and staff are being told to work from home this weekend. Pennsylvania, Indiana, South Carolina and Utah are closing their capitols altogether.

The first-floor windows of the state capitols in Illinois, Michigan, Virginia and Wisconsin have been boarded up.

Several large states are on high alert. In New York, state police have taken steps "to harden security in and around the State Capitol in Albany." And in California, more than 1,000 National Guard troops have been deployed and fencing has been erected around the Capitol after what the governor called an "unconscionable assault on our Republic."

Correction: An earlier version of this story incorrectly stated the reason police arrested Wesley Allen Beeler. He was arrested as he attempted to pass through a police checkpoint in downtown Washington, DC, with unauthorized inaugural credentials, an unregistered handgun and more than 500 rounds of ammunition.