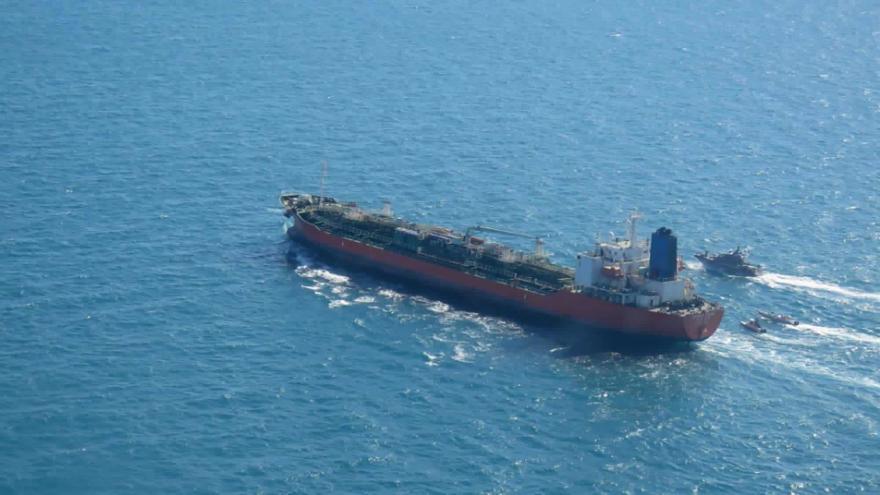 (CNN) -- The owner of a South Korean-flagged tanker which was seized by Iran in the Persian Gulf on Monday has described how "armed soldiers" boarded the vessel.

The crew of the Hankuk Chemi tanker received a 10 to 20 minute warning from Iranian authorities before the ship was boarded by troops, its owner, DM Shipping Co Ltd., told CNN in a statement Tuesday.

The company said its communication with the tanker was cut off as soon as the ship was seized.

Seoul dispatched an acclaimed anti-piracy unit to the Strait of Hormuz following the tanker's seizure.

The Cheonghae Unit, which includes South Korean special forces, arrived in the strait on Tuesday aboard the 5,000-ton destroyer Choi Yong, according to the South Korean defense ministry.

Tensions in the Persian Gulf have increased in the past week, near the one-year anniversary of the deadly US strike on Qasem Soleimani, a top Iranian general.

The US has flown B-52 bombers over the region, and on Sunday US President Donald Trump ordered the USS Nimitz aircraft carrier, which was due to rotate home, to remain there.

Then on Monday, Iranian boats seized the Hankuk Chemi as it transited the Strait of Hormuz, the narrow entrance to the Persian Gulf from the Arabian Sea.

Iran said the vessel was seized for "creating environmental and chemical pollution in the Persian Gulf," the semi-official news agency Tasnim said. The vessel has been seized by the navy of the Islamic Revolutionary Guard Corps, according to the Mehr news agency.

But following the tanker's seizure, an Iranian government spokesman claimed that two years ago South Korea had frozen $7 billion of Iranian funds which were currently held in a South Korean bank.

"We hope the south Korean government will unblock the frozen money as soon as possible," Ali Rabiei said Tuesday on Iranian state television.

Choi Young-sam, a spokesman for South Korea's foreign ministry, said Tuesday that the South Korean government is in close communication with counterparts in Tehran and is trying to secure the release of the sailors and the vessel.

There was no suggestion the Cheonghae Unit would be undertaking a rescue operation, with the defense ministry saying it would be advising other South Korean-flagged vessels in the area on safety.

Established in 2009 as South Korea's first overseas anti-piracy force, the Cheonghae Unit had been deployed to the Gulf of Aden, between Somalia and Yemen, to help maintain the free movement of South Korean vessels through the region.

Almost a year ago, the unit's area of operations was expanded to include the Gulf of Oman and the Persian Gulf, about 1,800 kilometers (1,118 miles) to the east, as tensions spiked in the region.

That expansion came after officials in the US, a key South Korean ally, asked for help in safeguarding international shipping in the region, although Seoul stopped short of joining a US coalition to protect the route.

Yet the unit has pulled off rescues of South Korean nationals in the region before -- most notably in 2011, off the coast of Somalia. In that action, commandos from the Cheonghae Unit stormed a South Korean tanker that had been hijacked along with its crew of 21 by a gang of Somali pirates.

The commandos killed eight pirates and captured five others, according to the South Korean Defense Ministry. None of the tanker's crew died.

In its statement on Tuesday, the Hankuk Chemi's owner said it was in contact with the South Korean consulate in Tehran and expected more information later in the day.

The company added that it has asked its protection and indemnity insurance (P&I) club to investigate the seizure. The insurance club is expected to dispatch an investigator to Iran to check on the safety of the crew and to examine Iran's claim that the tanker was seized due to environmental contamination.