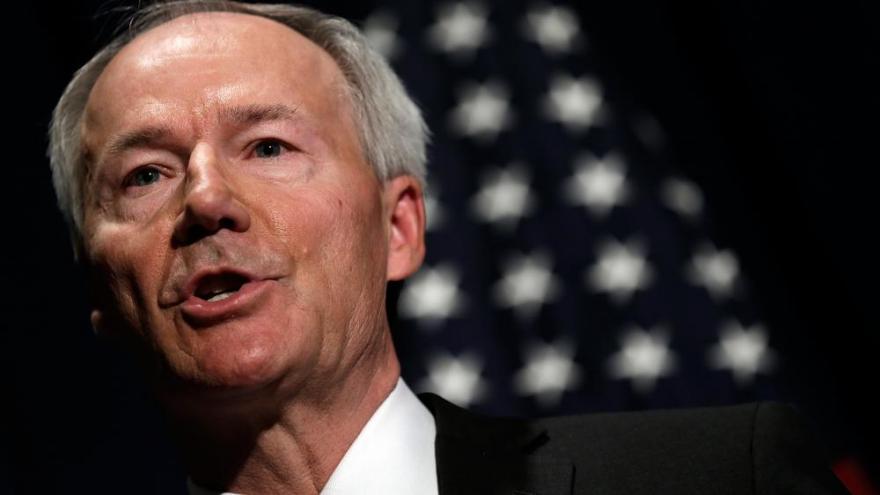 Asa Hutchinson speaks during a press conference April 2, 2013, at the National Press Club in Washington. Hutchinson said September 12 that he thinks a newly announced Covid-19 vaccine mandate "hardens the resistance" some people have to getting one.

(CNN) -- Arkansas' Republican governor said Sunday that he thinks President Joe Biden's newly announced Covid-19 vaccine mandate "hardens the resistance" some people have to getting one.

"We have to overcome resistance," Gov. Asa Hutchinson told NBC's "Meet The Press."

"This is a very serious, deadly virus and we're all together in trying to get an increased level of vaccination out in the population. The problem is that I'm trying to overcome resistance, but the President's actions in a mandate hardens the resistance."

Biden announced last week that his administration was imposing stringent new vaccine rules on federal workers, large employers and health care staff as part of a new push to contain the coronavirus pandemic, a move that has angered some GOP critics who, like Hutchinson, view it as a government overreach.

The governor on Sunday called Biden's decision divisive and "an unprecedented assumption of federal mandate authority," adding that "it increases the division in terms of vaccination when we should all be together trying to increase the vaccination uptake."

When asked about whether businesses might want the political cover for a mandate, Hutchinson said that decision should be left to each individual business.

Hutchinson said with or without the mandate, he expects vaccination rates to continue increasing both in Arkansas and throughout the US.

Asked on Sunday about the criticism from governors like Hutchinson, US Surgeon General Dr. Vivek Murthy told CNN's Dana Bash on "State of the Union" that "from time to time there will be disagreements, you know, on policies. But that doesn't mean that we don't stop dialoguing and working with one another."

Murthy went on to defend the administration's new mandates, saying, "the reason that we are pursuing some of these requirements is again, we know a lot of businesses have welcomed it."

"We know that many will help keep workplaces safe," he said.

Biden's new requirements could apply to as many as 100 million Americans, which is nearly two-thirds of the American workforce. The President has directed the Labor Department to require all businesses with 100 or more employees ensure their workers are either vaccinated or tested once a week. Companies could face thousands of dollars in fines per employee if they don't comply.