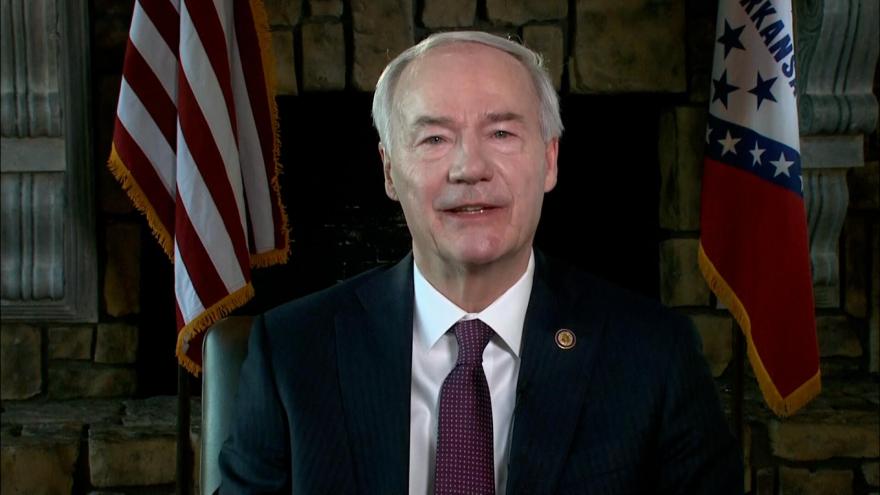 "Well, anything that is divisive is a concern and is not helpful for us fighting in the battles in Washington and at the state level," Gov. Asa Hutchinson told CNN's Jake Tapper on "State of the Union" when asked about Trump having criticized top Republicans on Saturday while speaking to Republican National Committee donors. "In some ways, it's not a big deal what he said, but at the same time whenever it draws attention, we don't need that."

"We need unity. We need to be focused together," he added. "We have slim majorities or slim numbers in Washington and we got battles to fight. So we need to get beyond that."

The comments from the governor come as top leaders in the party struggle to gain control of its direction in the wake of the former President's loss. As Trump loyalists in Congress and at the state-level continue to support his vision for the party, others are looking for leadership elsewhere as the GOP aims for gains in the 2022 midterm election and recapturing the White House in 2024.

Speaking to the donors Saturday evening, Trump insulted Republican Senate Minority Leader Mitch McConnell -- comments that received huge applause -- and once again took aim at former Vice President Mike Pence, whom he said had failed him in overseeing the certification of the Electoral College results, according to a person in the room.

Trump went through an extensive recounting of debunked claims the election was stolen from him, the person said, and also spoke generally about party unity, lamenting that Republicans don't stick together as well as Democrats.

Hutchinson, too, has drawn the ire of the former President, who blasted the governor last week over his decision to veto a bill that would have prohibited physicians in Arkansas from providing gender-affirming treatments for trans people under age 18. State lawmakers later overturned the governor's veto.

"'Bye-bye Asa,' that's the end of him! Fortunately for the Great State of Arkansas, Sarah Huckabee Sanders will do a fantastic job as your next Governor!" Trump said in a statement, referring to his former press secretary who announced a 2022 gubernatorial bid in the state earlier this year. Hutchinson cannot run again after being elected governor twice.

House Majority Whip James Clyburn told Tapper later on "State of the Union" that he doesn't think all Republicans are supportive of Trump's debunked claim that the 2020 election was stolen from him, something the former President focused on during his speech on Saturday.

"I think it's a significant portion of the Republican Party might be, but not all Republicans," Clyburn, a South Carolina Democrat, said when asked if he believes the party is still committed to the election lies.

"I talk to a lot of Republicans almost daily and they do feel that if they had a chance of getting out of a primary and into a general election, they would be more forthcoming," he added.