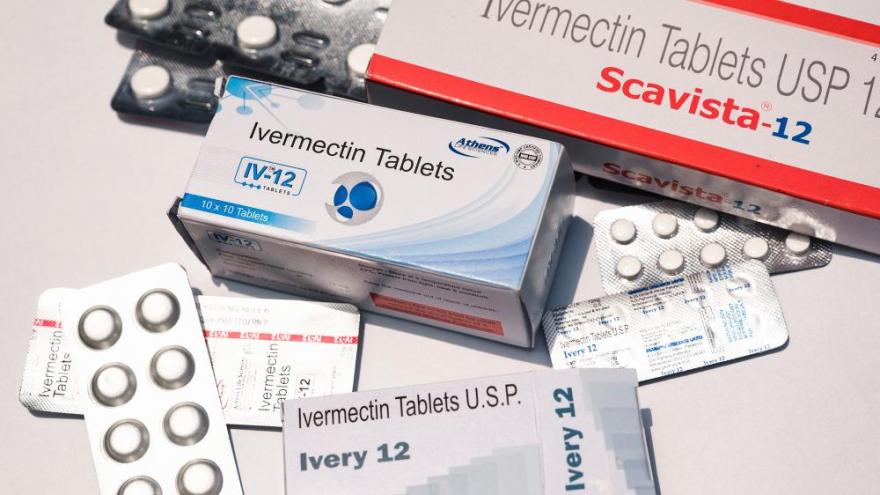 The Arkansas Medical Board investigates after a doctor said he prescribed an anti-parasitic drug Ivermectin, pictured here, in India on May 19, "thousands" of times for treatment of Covid-19, including to inmates in an Arkansas jail.

(CNN) -- The Arkansas Medical Board is investigating after a doctor said he prescribed an anti-parasitic drug "thousands" of times for treatment of Covid-19, including to inmates in an Arkansas jail.

The FDA has been warning against the use of ivermectin for treatment of Covid-19 since March. The drug is used to treat parasitic infections, primarily in livestock, and the CDC recently cautioned about an increase in reports to poison centers of severe illness caused by the drug.

Justice of the Peace Eva Madison raised the issue during a county budget hearing in Fayetteville on Tuesday, saying a county employee had told her the jail's medical provider was prescribing ivermectin to treat and prevent Covid-19.

The county employee -- who doesn't work for the sheriff's department -- was directed to the jail to receive a Covid-19 test, Madison told CNN. During the visit he was prescribed ivermectin, which the Arkansas Department of Health also advises not to use to treat or prevent Covid-19.

"He is very afraid of retribution from the county and so he asked me to raise this issue on his behalf," Madison said.

"Much to my surprise, he (the sheriff) defended the use. He defended the practice," Madison said. The sheriff offered to put Madison in touch with the medical provider. Screen shots of the text exchange with the sheriff provided by Madison confirm her account.

Dr. Robert Karas provides medical services to the Washington County jail. He has been the contracted provider since 2015, according to Madison.

Madison said Karas defended his use of the drug during a phone conservation and again in a subsequent television interview after the practice came to light. Karas told television station KFSM that he began last October with prescribing the drug and has subsequently given it to family members and "thousands" of others. The doctor also recorded the station's interview with his own camera and posted it online.

"Do you want us to try and fight like we're at the beaches of Normandy? Or do you want me to tell what a lot of people do and say -- oh, go home and ride it out and go to the ER when your lips turn blue," Karas said.

Karas said that he started to use ivermectin in the jail population starting in November on "high-risk patients over 40." The doctor defended his practice ,saying no deaths have been reported due to Covid-19 out of the 531 cases in the jail.

CNN called the Washington County Sheriff's Office to confirm the number of Covid-19 patients treated at the jail and was referred back to Karas, since he is contracted to provide medical services. Calls to the doctor's office have not been returned.

The Arkansas Medical Board has opened an investigation into the matter, Meg Mirivel, a spokesperson for the Arkansas Department of Health, told CNN. Due to the ongoing investigation the department was not able to comment further.

The Sheriff's office defended the practices to the local paper, saying all treatment is "voluntary."

"They are able to refuse any medication they're offered. Even with the vaccine, it's all voluntary," Chief Deputy Jay Cantrell told the Northwest Arkansas Democrat-Gazette.

"I believe it's the county and the sheriff's constitutional duty to provide the detainees adequate and appropriate medical care." Madison told CNN.

"No one -- including incarcerated individuals -- should be subject to medical experimentation," Holly Dickson, executive director of the ACLU of Arkansas, said in a statement, adding that the sheriff "has a responsibility to provide food, shelter and safe, appropriate care to incarcerated people."

In a CDC health advisory issued Thursday, the agency said the use of ivermectin can result in "gastrointestinal symptoms such as nausea, vomiting, and diarrhea. Overdoses are associated with hypotension and neurologic effects such as decreased consciousness, confusion, hallucinations, seizures, coma, and death."