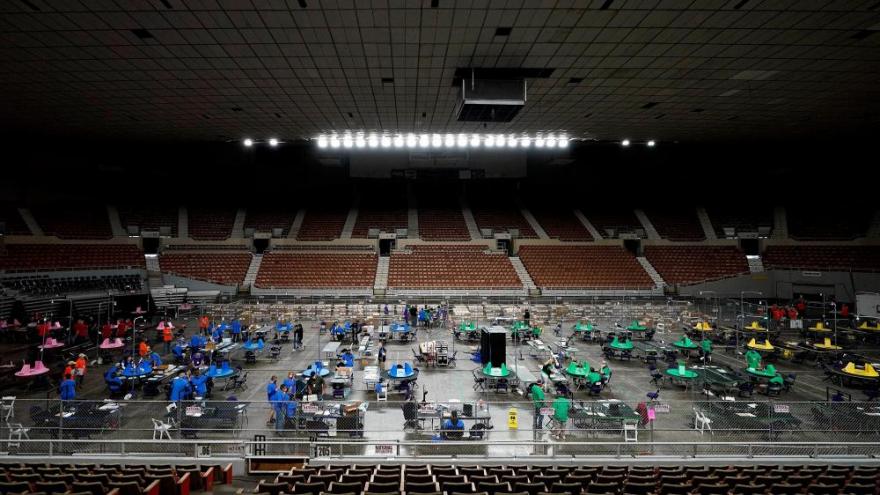 Maricopa County ballots cast in the 2020 general election are examined and recounted by contractors working for Florida-based company, Cyber Ninjas, Thursday, May 6, 2021 at Veterans Memorial Coliseum in Phoenix. The audit, ordered by the Arizona Senate, has the U.S. Department of Justice saying it is concerned about ballot security and potential voter intimidation arising from the unprecedented private recount of the 2020 presidential election results.

(CNN) -- The first semi truck full of 2020 election ballots rolled slowly through the Arizona State Fairgrounds on Friday, past the "Crazy Times Carnival" set up in the south parking lot to a warehouse where the approximately 2.1 million ballots cast by Maricopa County voters will be stored for the next week.

This is the latest bizarre act in the replay of the Big Lie -- that the 2020 election was stolen from former President Donald Trump.

On Thursday night, a three-week ballot review led by the GOP-controlled Arizona Senate came to a temporary halt. The lease for the Senate and its tech consultants, Cyber Ninjas, was up at the Veteran's Memorial Coliseum, where openly partisan volunteers and hourly workers had been conducting the ballot count.

Despite public pledges that this third ballot review would be finished by May 14, Arizona Senate liaison Ken Bennett told CNN they had gotten through only about 500,000 ballots before being forced to give up their space.

The lease could not be extended because the Coliseum is hosting more than a dozen high school graduations in the coming week, raising possible security concerns about the ballots, which are now being relocated.

Friday morning, forklifts began lifting pallets filled with boxes of ballots onto trailer beds to move to a temporary warehouse, a building on the south side of the fairgrounds called the Wesley Bolin Building a couple of hundred yards away. The sage-green warehouse sits directly next to the Crazy Times Carnival, which has been using the Wesley Bolin's restrooms for carnivalgoers as public bathrooms, creating a second, ongoing security issue beyond the relocation from the Coliseum.

"They'll be in a locked container with 24/7 armed guards, fencing and 24/7 livestreaming cameras," Bennett told CNN.

When asked if the facility housing the ballots would be temperature- and moisture-controlled, Bennett said it would be, adding that "the place where the ballots are stored will be in a condition that does not affect the ballots negatively."

Bennett would not discuss the specifics of circumstances inside the Wesley Bolin Building.

On the Arizona fairgrounds website describing its venues, it warns that the building is "not recommended for use between May through September." The reason? "Due to temperatures during the summer months."

As the truck moved the ballots across the fairgrounds, temperatures were scheduled to hit 102 on Friday.

The ballots will stay in their temporary home until May 23, when they will be moved back to the Coliseum. Bennett told CNN the count will restart on May 24, with the goal of finishing "within 14-16 days."

That pace would require an exponential ramp-up and rate that so far have proved elusive to this partisan ballot count, taking place despite two audits conducted by Maricopa County showing no widespread election fraud.

"I've never seen anything like it," said election technology expert Ryan Macias of the ballot review being led by Cyber Ninjas, hired by the state Senate. "They do not have auditing experience. They do not have election technology experience. The more that this (the ballots) moves in and out, the more likely the chain of custody will be broken and the less likely that the data is reliable."

Macias is an expert in election technology who is one of the pro bono observers brought in by the Arizona secretary of state's office to watch the Cyber Ninjas ballot count. He has been hired by both Republicans and Democrats to help safeguard dozens upon dozens of state and federal elections.

"There's ballots; there's people counting. But the process in which they are utilizing, at least on the counting floor, is nothing that is in an election environment," said Macias.

CNN spoke with more than a dozen workers as they went in to conduct the ballot count over the last three weeks. On many of the vehicles, there were bumper stickers signaling support for Trump.

Elouise Flagg, one of the workers, said she was inspired to join the Cyber Ninjas ballot count because she didn't believe the results of the 2020 election nor the subsequent audits conducted by Maricopa County.

"I think Donald Trump won the election -- firm believer," said Flagg. "I hope we come to a point where we're happy with the results and truth is told."

Workers like Flagg will return in a little more than a week to start the ballot count again. A new lease agreement between Arizona Senate Republicans and the state fairgrounds shows an end date of June 30. The real deadline, however, is July 10 and 11, when the Crossroads of the West gun show takes place in the Coliseum.