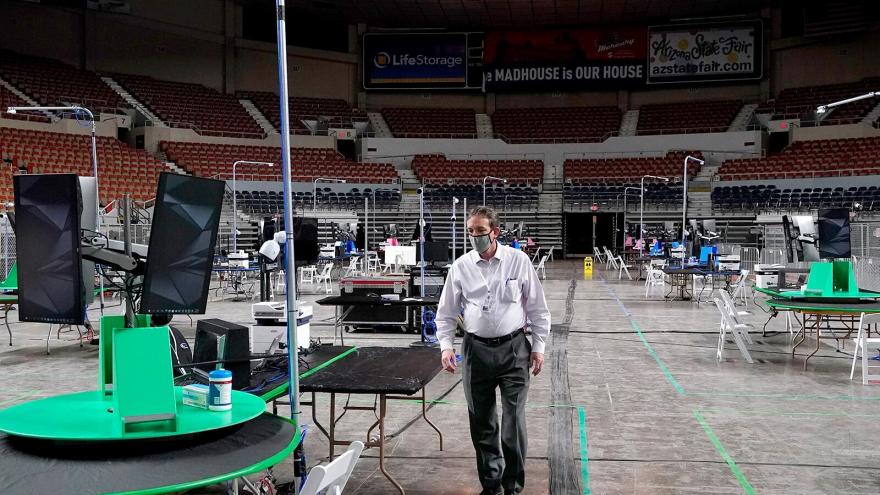 Ken Bennett, former Republican Arizona Secretary of State, pictured on April 22, in Phoenix, as an election audit of the 2020 ballots from Maricopa County live streamed by a pro-Trump television network, kicked off.

(CNN) -- An election audit of the 2020 ballots from Arizona's largest county -- one demanded by Republican state senators, overseen by a purveyor of election conspiracies and live streamed by a pro-Trump television network -- kicked off on Friday.

Earlier in the week, Maricopa County handed nearly 2.1 million ballots and nearly 400 tabulation machines over to the state Senate after Republican lawmakers subpoenaed the materials and a judge ruled county officials had to comply. In a last-ditch effort to block the controversial audit, the Arizona Democratic Party and the lone Democrat serving on the Maricopa County Board of Supervisors, which oversees elections, sued to halt the count Thursday evening. A judge agreed to briefly pause the audit after a Friday hearing, but Democrats declined to provide the required $1 million bond and so the audit continued.

The partisan audit, which could stretch for roughly two months, comes after county election officials conducted two audits and found no evidence of widespread voter fraud and other issues. The Arizona Secretary of State has already certified the election results, showing President Joe Biden narrowly won the state. But the latest review highlights how many Republicans continue to cling to former President Donald Trump's unfounded claims of widespread voter fraud in 2020 -- falsehoods that continue to roil the GOP.

On Friday, Trump continued to spread his election conspiracy claims in a statement and thanked Arizona's "brave and patriotic" Republican state senators.

Arizona Senate President Karen Fann, a Republican who has led the charge for the audit, has insisted she's running a fair process to ensure election integrity. But the overtly partisan review has already sparked an outcry from nonpartisan election security experts, GOP officials in Maricopa County and Arizona's secretary of state, among others.

"I have been avoiding calling it an audit to be quite honest with you, because that's not what it is. They have been making this up as they go along," Arizona Secretary of State Katie Hobbs, a Democrat, said in an interview with CNN. "This is just a fishing expedition by people who are determined to find something wrong.

Fann did not respond to CNN's request for comment.

The review is being overseen by a company whose chief executive supported Trump and shared election conspiracies in since deleted tweets, and it will be live broadcast by the right-wing One American News Network. The audit's GOP organizers have been cagey about who will be doing the ballot counting and whether the teams will be bipartisan. They also have ignored requests from election integrity groups to allow nonpartisan election administration experts to observe the process. And journalists who want to report on the endeavor are only allowed to do so if they agree to participate in the process as election observers and will be barred from taking notes or video.

"This is not like any audit I've ever seen," said Mark Lindeman, the acting co-director of Verified Voting, a nonpartisan organization focused on technology and election administration. "If it intends to be perceived as fair-minded and credible, they've made some bad mistakes."

The partisan nature of the latest audit was evident from the outset.

Logan was also listed as an expert witness in a Michigan lawsuit that alleged election fraud connected to Dominion Voting Systems, another conspiracy pushed by some Republicans in 2020.

Logan also confirmed to the Arizona Mirror that he authored a document titled "Election Fraud Facts & Details" that includes disproven claims about election fraud and voting machines in the 2020 election.

"Recently there have been several articles claiming I am biased, and therefore unfit to run the lead company involved in the audit of Maricopa County," Logan said in a statement via the PR firm. "These need to be answered to give the American people confidence in this audit. Because this is not about me or anyone else involved, and it is not about a media narrative, but about the systemic, transparent method we have created to ensure Arizonan and American confidence in the election process and results."

Ken Bennett, a former Arizona Secretary of State who was hired by Senate Republicans to act as a liaison for the audit, brushed aside any inquiries about Logan's potential biases at a press event Thursday.

"We're not here to audit Mr. Logan's opinions about anything," Bennett said. "We're here to audit the ballots, envelopes, everything that was involved in the Maricopa election in November of 2020."

Logan, who defended the integrity of the audit at the press event, insisted that those counting the ballots had undergone background checks and their social media had been scrubbed for apparent bias.

In addition to hand counting the ballots and reviewing the voting machines, the Cyber Ninjas review is slated to include door-knocking "to validate that individuals that show as having voted in the 2020 general election match those individuals who believe they have cast a vote," according to their contract.

Outside election experts have expressed alarm over Cyber Ninjas' lack of experience in the elections space, the seemingly haphazard security plans to secure the ballots and machines, the dearth of information about the audit procedures and the limited access for nonpartisan election observers.

"We request that you stop restricting the public's access to the audit and grant observation access to election administration and voting machine experts from nonpartisan American organizations and educational institutions across the country," election experts wrote in a letter to Fann. "We also urge the Arizona Senate to stop efforts that could undermine confidence in our elections."

There's little indication Senate Republicans or the firm they have hired is heeding those concerns. A spokesperson for Cyber Ninjas told CNN in an email that the counting will be done by people locally. "The local people are Democrats, Independents and Republicans. I don't know the percentage breakdown," spokesperson Rod Thomson said.

The Republicans running the audit have also played coy when it comes to media access. While Republicans agreed to allow OANN to livestream the audit, other media access has been limited. Officials told reporters they could access the audit if they agreed to serve as election observers. All observers -- including reporters -- would be barred from making recordings or taking notes of the proceedings.

"I support the objective of live streaming the audit and I vividly remember Philadelphia livestreaming their absentee ballot counting 24/7 without the involvement of One America News Network," Lindeman said. "I do not understand why the Arizona Senate has not found a way to do the same thing."

Television personalities at OANN -- another purveyor of election fraud conspiracy theories -- have played an active role in propping up the Arizona audit. While the Senate earmarked $150,000 for the effort, OANN personalities set up an outside organization to fundraise for the audit, an effort that former Trump administration official and OANN host Christina Bobb has promoted on Twitter.

Bennett obliquely acknowledged there was a source of outside funding at Thursday's media event, saying, "We know a group's name, but many of them have not disclosed where their sources of funding come from."

Hobbs, the secretary of state, dismissed the entire spectacle.

"There is absolutely no validity to this whole entire situation," Hobbs said. "Whatever happens with this exercise has no bearing on the outcome of the 2020 election. The 2020 election was secure. The results that we certified are accurate."

For election experts, the opaque and seemingly haphazard security plans for the ballot review have been particularly concerning.

The majority of members on Maricopa County's Board of Supervisors, including its chair, are Republicans that have stood by the integrity of the county's election results, which found President Joe Biden carried the county by more than 2 percentage points. County election officials have refused to aid in the Senate's efforts to review -- yet again -- the results. When it became clear they would have to hand over the ballots and voting machines, county officials refused a request from the Senate to use the county's elections building for their partisan audit.

Instead, the ballots were delivered to the Veterans Memorial Coliseum at the Arizona State Fairgrounds on Thursday.

A day before the ballot and machine transfer was set to begin, Fann contacted Maricopa County Sheriff Paul Penzone requesting 24-hour-a-day security for the ballot site.

"The request, which was on one day notice, would cost the county taxpayers, at minimum, $175,000, removing these critical first responders from service for three weeks. Sheriff Penzone has deemed this request unreasonable and outside the scope of our responsibility," Penzone said in statement declining the request.

It noted that the state, represented by Fann, was assuming responsibility for the ballots once they were in the Senate's custody, and Maricopa County was no longer responsible for securing the ballots.

As of Thursday evening, audit organizers insisted the ballots and counting machines would be kept secure and the count would be recorded, even though images of the ballots could not be shared publicly.

In a brief interview Thursday, Bennett insisted "we can't talk about the details" of security.

"We have guards 24-7 and fencing and live video recording," he added.