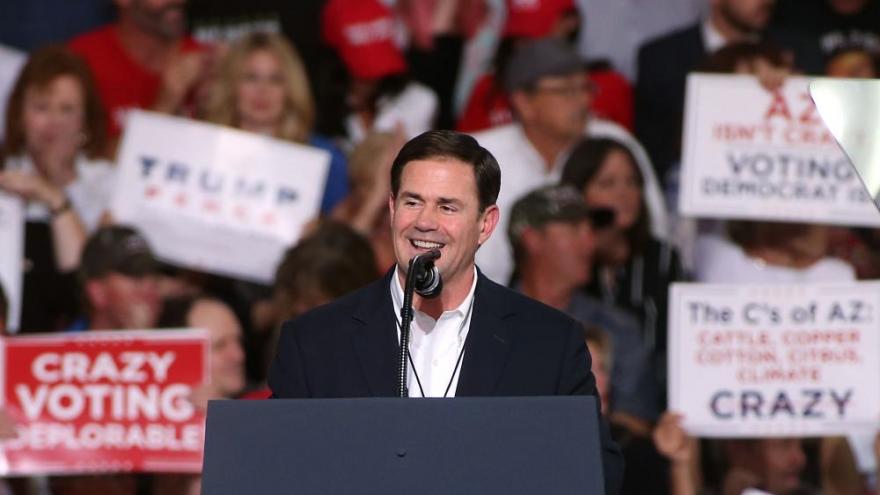 Arizona Gov. Doug Ducey on Tuesday signed into law a controversial bill that could remove tens of thousands of voters from the state's early mail-in voting list. Ducey is shown speaking during a rally for President Donald Trump at the International Air Response facility on October 19, 2018 in Mesa, Arizona.

(CNN) -- Arizona Gov. Doug Ducey on Tuesday signed into law a controversial bill that could remove tens of thousands of voters from the state's early mail-in voting list, shortly after the GOP-controlled state Senate passed the legislation.

SB 1485 would revise the state's permanent early voting list, which allows a voter to automatically receive a ballot by mail for every election. It would remove voters who have not participated in the last four elections, including partisan primaries, and don't respond to final mailed notices.

"Arizona is a national leader when it comes to election integrity and access to the ballot box, and today I signed #SB1485 to continue that legacy," Ducey wrote on Twitter.

Earlier on Tuesday, senators passed the bill on a 16-14 party-line vote. The Arizona House had approved the legislation last month.

Under the bill, voters would not be eligible to be removed from the list until January 2025, following the 2022 and 2024 cycles.

"This bill removes nonvoters," GOP state senator Vince Leach said in defending the bill. "These people have plenty of other means for voting."

Critics say the bill amounts to voter suppression, making it more difficult for occasional voters, voters of color, independents and rural Indigenous voters. Opponents say as many as 150,000 Arizona voters could be affected.

Vote by mail was widely practiced in Arizona long before the coronavirus pandemic took hold.

The bill has faced a whiplash journey through the Arizona Legislature. The Arizona Senate previously approved the measure before the state House amended it and passed its version in April. The amended bill was expected to get final passage in the GOP-led state Senate last month.

But the measure stalled following an intense back-and-forth over a highly controversial election audit between the bill's sponsor and another GOP lawmaker. After coming back to the Senate floor from caucusing on changes to the legislation, GOP state Sen. Kelly Townsend said she was voting against the legislation and any other election bills pending a Republican-backed audit of some of the state's mail-in ballots from the 2020 presidential election.

The so-called audit ordered by the Senate began in April and has stretched into May, despite the election results already undergoing multiple reviews that had found no evidence of widespread fraud and ultimately being certified by state election officials. The audit -- which perpetuates the falsehood that the election was stolen from former President Donald Trump -- has been decried by both Maricopa County's Board of Supervisors, which is majority Republican, and the Arizona secretary of state, who is a Democrat. The US Justice Department issued a warning about the audit last week, saying the effort could be in violation of federal voting and civil rights laws.

Though the review is still ongoing, Townsend voted in favor of the bill on Tuesday.

"I have been reassured because we are now looking into other issues," Townsend told her colleagues.