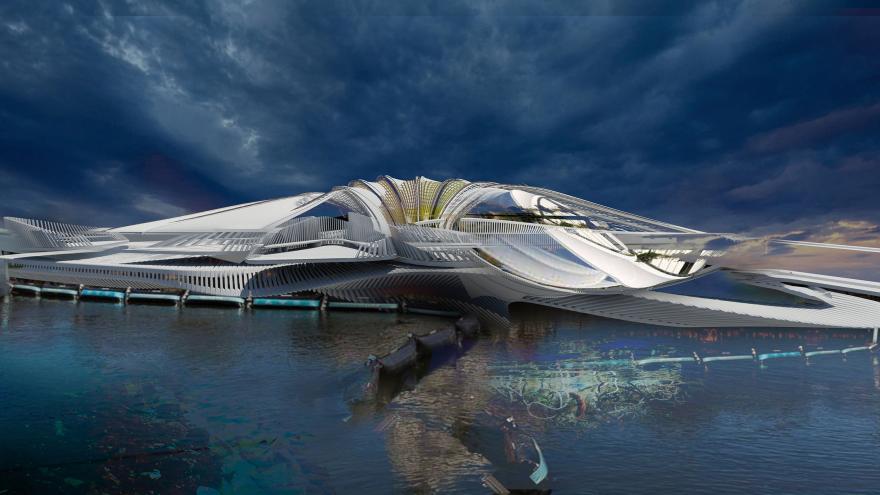 (CNN) -- A British architecture practice has revealed plans to build a luxury floating island resort made from recovered ocean plastic at a remote location in the Indian Ocean.

Margot Krasojević, founder of Margot Krasojević Architecture, told CNN that the 75-room hotel concept has funding to be built, though she did not disclose the financial backer.

The hotel will be built on top of a "floating island" situated in Australia's Cocos archipelago -- a chain of islands situated 2750 kilometers northwest of Perth, Western Australia.

Inspired by the Great Pacific Garbage Patch, the "Trash Island" underneath the resort will be made up of large plastic-filled bags weaved together and then anchored to the ocean floor. The bags will be weighed down with silt and sand to ensure the structure is stable, said Kasojević in a press release.

Artificial "roots," designed to mimic a mangrove, will be positioned around the structure in order to trap sediment and act as a flood defense by sucking up water to inflate when needed.

The tentacle-like structures will act like the island's "life jacket in an emergency, as they expand the trapped sediment creating artificially engineered land almost like an inflatable runway," according to the press release.

Guests of the hotel will shower in distilled seawater.

Krasojević told CNN the plans were at an early stage and could take several years to build, but that she hopes it will open to guests in 2025.

An alternative to landfill

"The inspiration came to me when I saw the Pacific Ocean's flotilla of plastic, an area twice the size of France just floating in position because of the currents," she said in a statement.

Tourism, she added, was changing to be more environmentally conscious as holidaymakers look to be "more in tune with their environment."

"Plastic is malleable and flexible so it can be reprinted, reformed or broken down and rebuilt. I personally think it a better alternative than dumping it in landfill," she said.

Claire Barlow, a senior lecturer in engineering from England's Cambridge University and an expert in sustainable manufacturing, told CNN she welcomed all efforts to remove plastic from the ocean.

She cautioned however that any type of construction must be done in a "balanced way" to avoid unintended environmental impacts.

"It looks absolutely fascinating," Barlow said of the design. "In a small part of the big jigsaw puzzle of dealing with marine waste I think it's a good idea. It's in a sensitive part of the world blighted by plastic -- so anything that can be done to reduce it is good.

"But there are indeed problems environmentally with building a hotel," she added.

"There will be construction materials and additional traffic in that area. And then once the hotel is there there will be people being taken to and from it."

The hotel would need to carefully manage things like waste generated on the island, she said.

"It's a bit 'greenwash' really -- but it helps to raise the awareness of marine waste so in a slightly cynical way, perhaps it's a good thing to do."