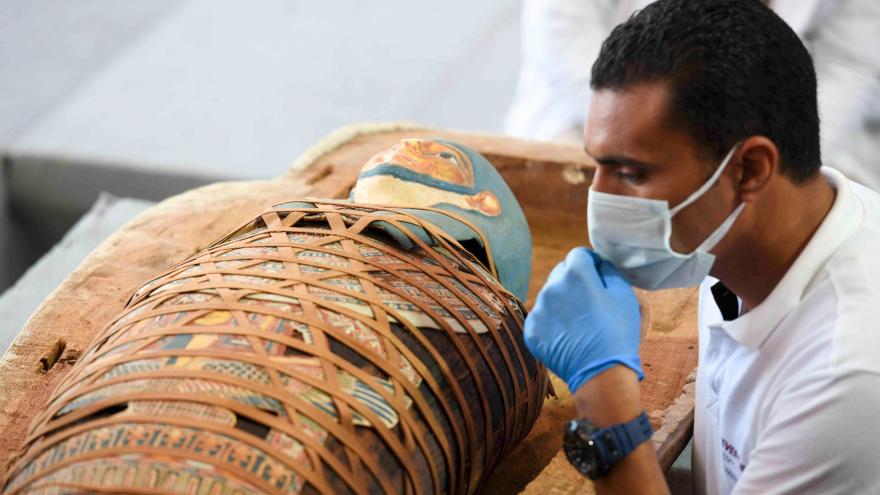 (CNN) -- Archaeologists in Egypt have uncovered at least 100 perfectly preserved ancient coffins, some containing mummies, and 40 statues in a vast Pharaonic necropolis south of the capital, Cairo.

Intricate painted designs are still visible on the sealed sarcophagi that were interred more than 2,500 years ago in burialshafts, along with golden masks and amulets.

Egyptian antiquities officials said the coffins, which were put on display Saturday at the Saqqara necropolis, may have been so well-preserved because they were of a higher quality and belonged to people of a "higher class."

"So this is something that makes this discovery special -- the quantity and quality of the coffins," said Mostafa Waziri, secretary general of Egypt's Supreme Council of Antiquities, comparing the findings to a group of coffins discovered at the site a month earlier.

Archaeologists opened one of the excavated coffins and the mummy inside was X-rayed to show how it had been preserved.

Waziri told reporters that the X-ray showed the mummy was a male between 5 feet 4 and 5 feet 7 inches tall, who was in good health during his life and most likely died between the age of 40 and 45 years old. 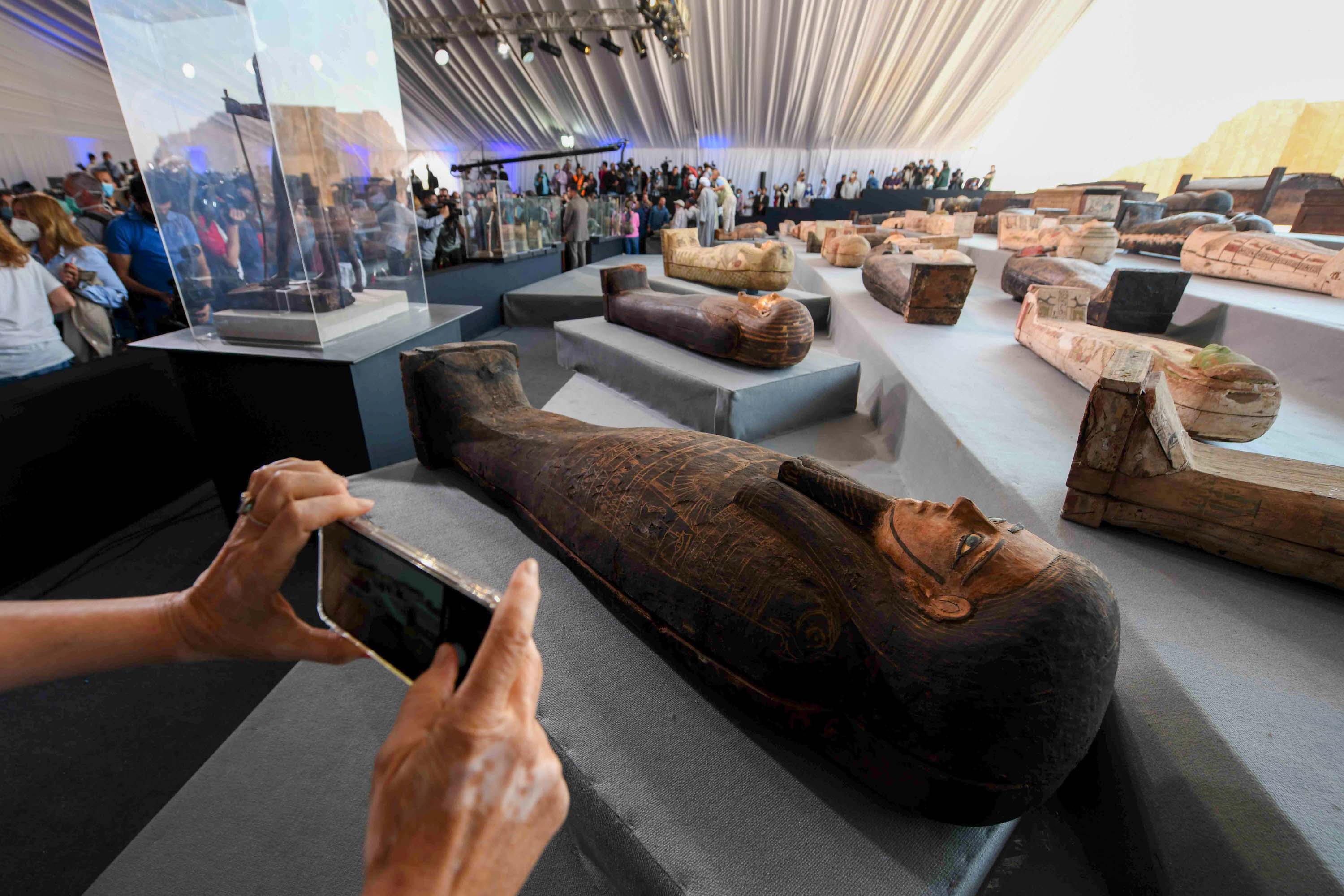 The tourism and antiquities minister, Khaled el-Anany, said the artifacts, including the statues and mummies, would be moved to several museums across Egypt.

El-Anany said archaeologists were continuing to excavate the grounds and that this discovery would not be the last, adding that a new archaeological finding in the Saqqara necropolis will be revealed later this year.

The announcement marks the latest in a string of discoveries at Saqqara, which was designated a world heritage site by UNESCO in 1979.

Dating back to Egypt's First Dynasty, from around 3150 BC,the vast burial ground once served the royal capital of Memphis, and the site is also home to the country's oldest surviving pyramid.

In October, researchers discovered a large cache of unopened sarcophagi at the site. A month earlier, they announced they had discovered 13 coffins piled on top of each other in a well. And back in April, they found another batch of mummies, again discovered in a shaft.

With global travel hit hard by the coronavirus pandemic and tourism forming an integral part of its economy, Egypt has been eager to attract visitors back to its archaeological sites.

According to research and advisory company Oxford Business Group, the Egyptian tourism industry -- which employs more than one million people -- contributed to over 9% of the country's GDP in 2019. 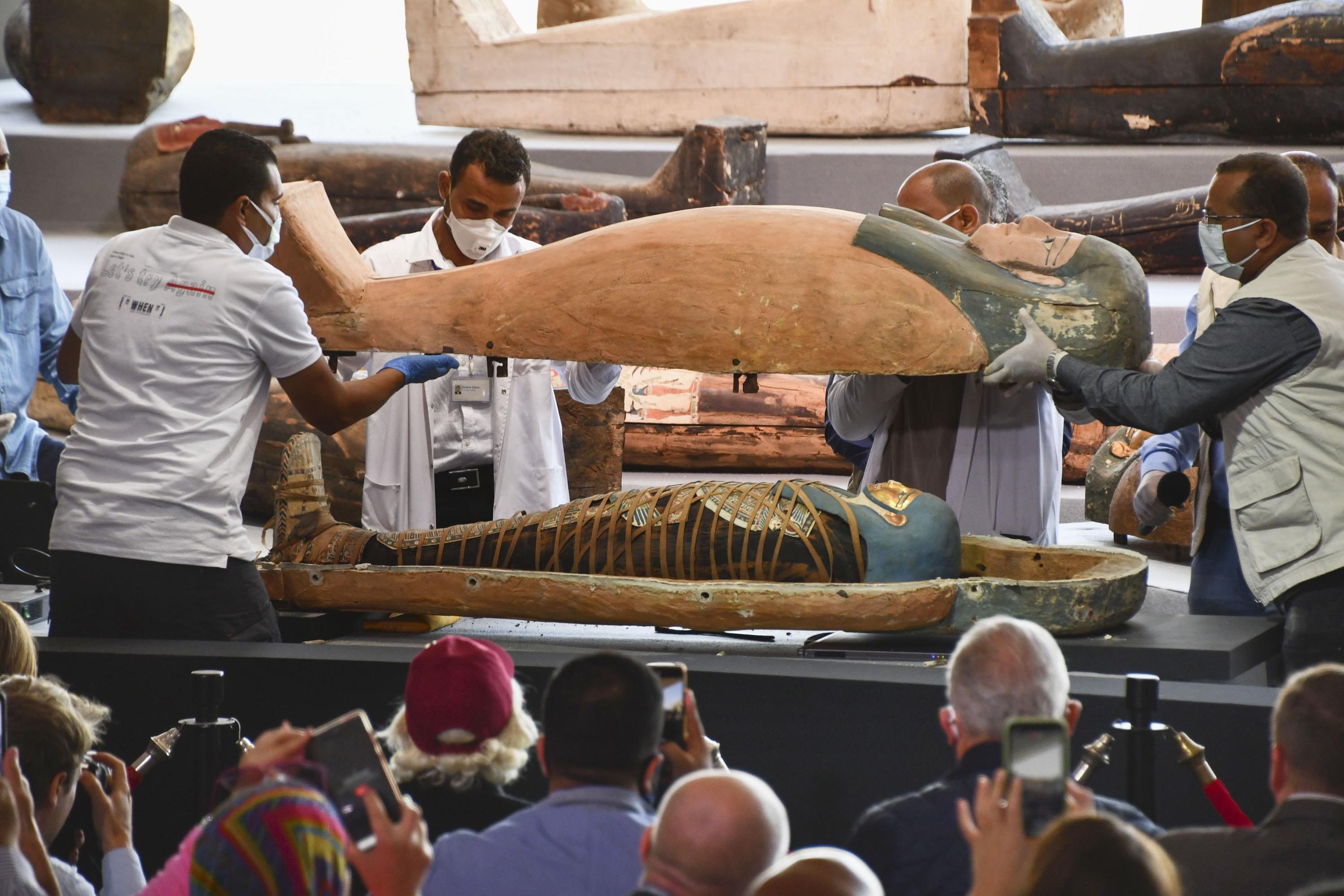