Approximately 1,500 people who may be Americans are left in Afghanistan, Blinken says 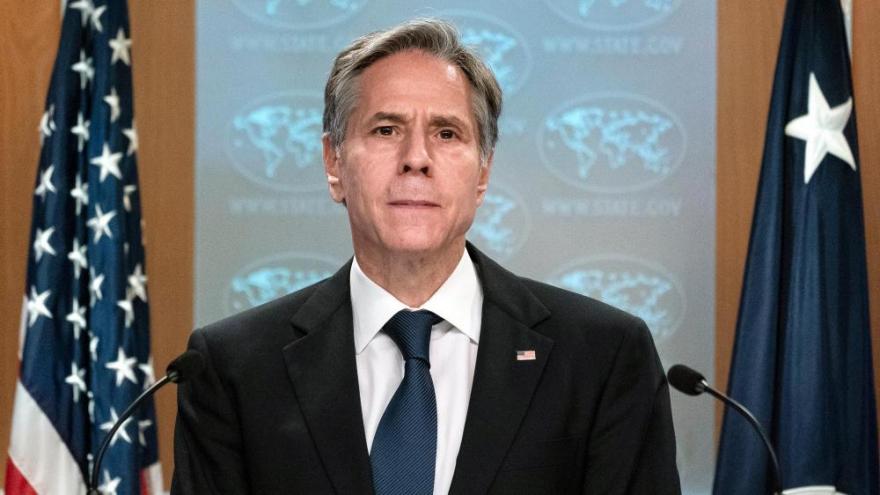 Secretary of State Antony Blinken, pictured here on August 25, in Washington says there are approximately 1,500 people who may be Americans left in Afghanistan, adding that when evacuation operations began, there were at least 6,000 American citizen who wanted to leave.

(CNN) -- Secretary of State Antony Blinken said Wednesday that there are approximately 1,500 people who may be Americans left in Afghanistan as the United States' presence on the ground nears its end.

The State Department has made contact with 500 people and is "aggressively" attempting to reach the other thousand as it continues evacuations from the now-Taliban controlled capital of Kabul.

More than 82,000 people have flown out since evacuation efforts began on August 14, including "at least 4,500 American citizens and likely more," Blinken told reporters at the State Department on Wednesday.

"More than 500 of those Americans were evacuated in just the last day alone," he said, adding that when evacuation operations began, "there was a population of as many as 6,000 American citizens in the country who wanted to leave."

"Over the past 24 hours we've been in direct contact with approximately 500 additional Americans and provided specific instructions on how to get to the airport safely," he said

"For the remaining roughly 1,000 contacts that we had who may be Americans seeking to leave Afghanistan, we're aggressively reaching out to them multiple times a day through multiple channels of communication," he added.

A senior State Department official described those efforts as incessant, but told reporters that "in many cases, we have not heard back from them."

"That could mean any number of things," the official said.

"It could mean that that is the person on the end of the line isn't in fact, a passport holder. There was some error in the data. It could mean that they've already left, and we certainly expect that applies to a number of Americans," the official said, noting the department had warned US citizens for months to leave Afghanistan.

"We are not going to leave anything to chance. That is why we are calling and re-calling, emailing and reemailing this universe of individuals we believe may be American citizens who're still in Afghanistan," they said.

The State Department has noted that it is difficult to get a precise count of the number of Americans in a country at any given time, as US citizens are not required to register with the department or inform it when they depart.

"While evacuating Americans is our top priority, we're also committed to getting out as many Afghans at risk as we can before the 31st," Blinken said, outlining the riskiness of evacuation operations on the ground.

Biden administration officials have repeatedly voiced concern about security around Hamid Karzai International Airport in Kabul. The US believes ISIS-K, which is a sworn enemy of the Taliban, wants to create mayhem at the airport and has intelligence streams suggesting it is capable and planning to carry out multiple attacks, a US defense official told CNN.

On Tuesday, as he confirmed his decision not to extend the evacuation deadline beyond August 31, President Joe Biden acknowledged the growing threat that the group poses to the airport.

"Every day we're on the ground is another day we know that ISIS-K is seeking to target the airport and attack both US and allied forces and innocent civilians," the President said.

As a result, the US military has used helicopters in some instances to bring people in Kabul to the airport for evacuation. The third such extraction operation took place Tuesday evening, Pentagon spokesman John Kirby and Gen. Hank Taylor, Joint Staff deputy director for regional operations, told reporters during a briefing on Wednesday.

"It's hard to overstate the complexity and the danger of this effort," the top US diplomat said.

"We're operating in a hostile environment in a city and country now controlled by the Taliban with the very real possibility of an ISIS-K attack. We're taking every precaution but this is very high-risk. As the President said yesterday, we're on track to complete our mission by August 31 provided the Taliban continue to cooperate and there is no disruption to this effort," he said.

While Blinken has said that the US is committed to getting not only Americans, but also "the many Afghans who have stood by us over these many years and want to leave and have been unable to do so," out of Kabul after August 31, it is unclear how these efforts will continue once the US is no longer a presence on the ground.

There are "very active efforts underway on the part of regional countries to see whether they can play a role in keeping the airport open once our military mission leaves or if necessary reopening it if it closes for some period of time," Blinken said Wednesday, but no agreement has been made on the operation of the airport once US troops leave.

Blinken could not commit to a continuing diplomatic presence

The top US diplomat also did not commit to a US diplomatic presence staying in Afghanistan following the US military withdrawal, saying in a news conference, "with regard to our own potential presence going forward after the 31st, we're looking at a number of options."

A senior State Department official said the future of the airport and the future of the US diplomatic presence are "very much related," noting that "you'd be hard pressed to find a country that would feel comfortable operating diplomatically in a country where there is not ready access to an airport or a seaport."

"An airport is going to be important to not only a country like the United States but also our allies and partners," they told reporters Wednesday.

The official also declined to say whether the US would keep a diplomatic presence in Afghanistan after August 31, saying: "Right now we're focused on the evacuation operation."

They also noted that the number one priority is the "safety and security our people."

Even as the United States and other countries fly tens of thousands of people out of the country, many Afghans who assisted the war effort are still awaiting their turn to leave. The dangerous and chaotic scenes outside the airport have made it virtually impossible for Afghans -- even those with green cards, specific instructions from the US embassy, or ailing children -- to make it onto the airport grounds.

White House press secretary Jen Psaki told CNN's Phil Mattingly later Wednesday at a White House briefing that the US does not have a cap on the number of Special Immigrant Visa applicants they hope to get out of Afghanistan by the end of the month.

"We are continuing to work every day to get as many people evacuated as we can," Psaki said.

Following the US withdrawal and evacuation effort, Blinken said the US would "judge our engagement with any Taliban-led government in Afghanistan based on one simple proposition: our interests and does it help us advance them or not."

"But fundamentally, the nature of that engagement and the nature of any relationship, depends entirely on the actions and conduct of the Taliban."