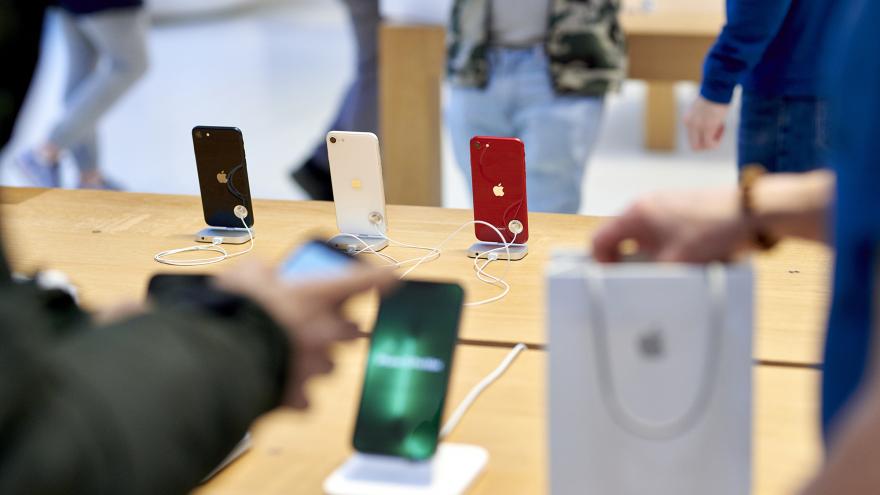 (CNN) -- Apple topped Wall Street's estimates in its latest quarter and reported one of the strongest three-month periods in its history on Thursday thanks to record revenues for its services business and strong iPhone sales. However, the company warned that new Covid-related restrictions in China could hurt the current quarter.

The company reported sales of $97.3 billion for its fiscal second quarter, up 9% from the year prior. Apple's iPhone business grew 5% to $50.6 billion during the quarter. Revenue from its services business climbed 17% from a year earlier to nearly $20 billion in the quarter. Mac revenue grew to $10 billion, despite supply contraints, thanks largely to consumer interest around its new in-house M1 chip.

The company experienced growth in nearly every category except the iPad, which also continues to face supply chain issues.

Shares of Apple initially rose in after-hours trading following the earnings results, before falling more than 4%. Apple's board of directors also authorized a $90 billion increase to its share repurchase program.

CEO Tim Cook kicked off the earning call by recognizing the company's efforts in Ukraine, such as donating products to support refugees arriving in the United States, and spoke to the current "unpredictable" state of the pandemic as the company starts to welcome employees back to the office. "These times remind us that we cannot know what the future may hold," he said.

He also referenced growing restrictions in China following an increase in Covid cases, but said many of the impacted assembly factories have since restarted. He said this, along with industry-wide silicon shortages, will impact the next quarter by $4 billion to $8 billion. The company is also keeping an eye on how inflation will affects customer spending in the months ahead.

"We are definitely seeing a level of inflation, like everyone is seeing," Cook said. "We are monitoring [consumer impact], but our main focus right now is on the supply side."

Last month, Apple hosted its first product event of the year where it showed off an upgraded iPad Air, a new desktop computer, a powerful new Mac chip and the first budget iPhone with access to 5G networks. The interest around these products will be reflected in its third quarter later this summer.

"The supply chain issues continue to be a headwind in China and that will weigh on June quarter growth," said Dan Ives, an analyst with Wedbush Securities.