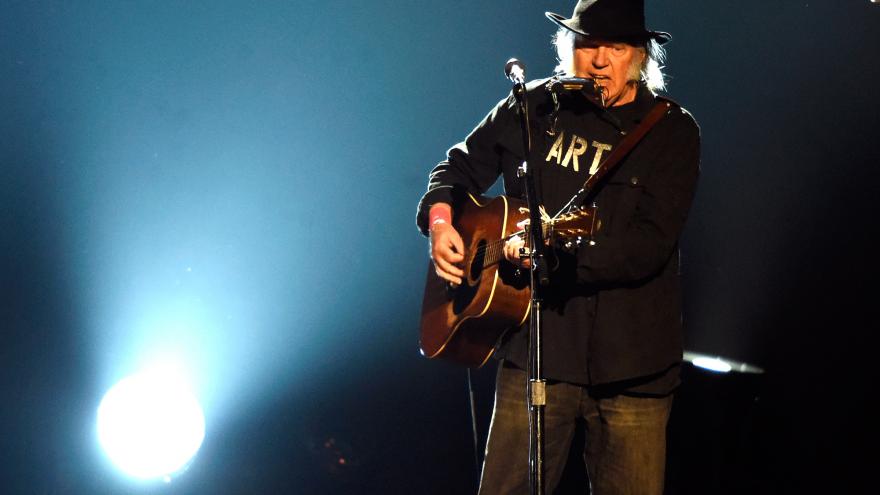 (CNN) -- Just a day after Spotify agreed to remove Neil Young's music from its service, Apple Music trolled its streaming rival by giving the musician some rock star treatment.

In a tweet sent late Thursday, and later pinned to the top of the official Apple Music Twitter account, Apple called its platform "the home of Neil Young." Some Apple Music users also reported seeing Young's albums and playlists promoted front and center in the Apple Music "browse" section with the banner "We Love Neil."

The messaging is a clear dig at Spotify and possibly an attempt by Apple to use Spotify's PR headache to gain some ground. In the third quarter of 2021, Spotify reported having 172 million paying subscribers. Apple has not disclosed comparable subscriber numbers in two years, but one recent report suggested Apple Music remains well behind Spotify in the market.

Earlier this week, Young expressed in a now-deleted post on his official website that he no longer wanted his music on Spotify because of its relationship with divisive podcast host Joe Rogan. On his Spotify podcast, "The Joe Rogan Experience," the comedian has made frequent false and inaccurate claims surrounding vaccines and Covid-19, while also hosting numerous controversial guests.

Spotify followed Young's request by removing his catalog from the platform and said it hopes "to welcome him back soon." Young, who has been an advocate for Covid-19 safety and prevention, had about 6 million monthly listeners on Spotify.

"I am doing this because Spotify is spreading fake information about vaccines — potentially causing death to those who believe the disinformation being spread by them," he wrote in the deleted post, according to Rolling Stone. "They can have [Joe] Rogan or Young. Not both."

On Twitter, the hashtag #DeleteSpotify went viral as some users said they canceled their Spotify subscriptions in support of the 76-year-old musician.

Spotify did not respond to a request for comment.

Earlier this month, a group of more than 250 scientists, doctors and nurses penned an open letter to Spotify condemning the company for platforming Rogan and calling on Spotify to warn its listeners about misinformation.

"The Joe Rogan Experience" was Spotify's most popular podcast globally in 2021. It became exclusive to Spotify in 2020 when Rogan signed a multi-year licensing deal reportedly worth about $100 million.

While Rogan does not have a presence on Apple Music, its standalone Apple Podcasts appfeatures podcasts such as "Bannon's War Room" from Steve Bannon, known for spreading misleading information.