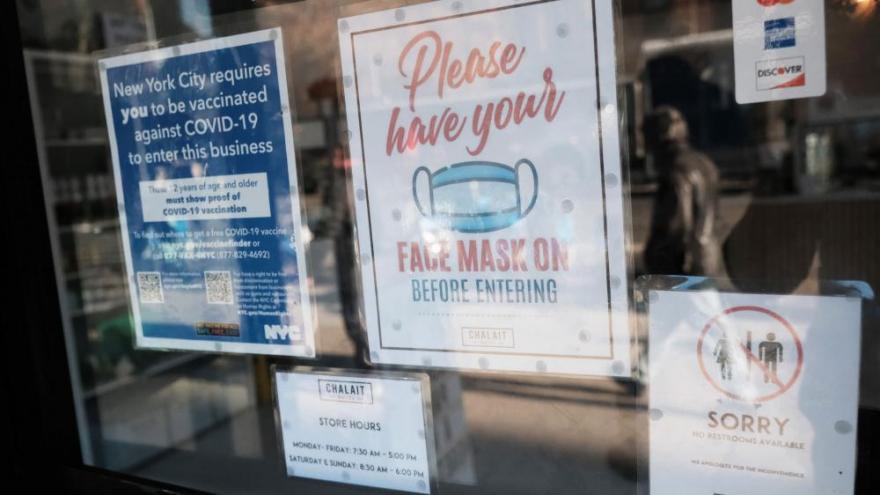 An appeals court ruled Friday that the government can enforce a vaccine-or-testing rule for companies with more than 100 employees. A sign on the door of a coffee shop in New York City asks for proof of vaccination on December 13.

(CNN) -- The Biden administration scored a significant victory Friday in its court battles to enforce various federal Covid-19 vaccine mandates, with an appeals court ruling that the government can enforce its vaccine-or-testing rule for companies with more than 100 employees.

Soon after the order came down, those challenging the mandate said that they'd turn to the Supreme Court to put it on hold.

The decision in favor of employer mandate, from the 6th US Circuit Court of Appeals, came after a separate appeals court on Friday declined a Justice Department request that it reinstate the administration's federal contractor mandate, which had been blocked nationwide by a federal judge earlier this month.

A third Biden mandate -- requiring vaccines for certain heath care workers -- is being reviewed by the Supreme Court, after lower courts froze it in half the states in the country.

The 6th Circuit decision allowing the Occupational Safety and Health Administration to implement the administration's rules for large employers is a rare victory for President Joe Biden in what has been an uphill battle in conservative-leaning courts that have been hostile to his administration's approach to requiring vaccines.

OSHA said on its website that they were "gratified" by the appeals court's decision and that to "account for any uncertainty" due to the legal changes it will not issue citations for noncompliance to employers before January 10.

A flurry of appeals

The groups appealing the court's ruling are asking Justice Brett Kavanaugh, who has jurisdiction over the lower court that rendered the decision, to put it on hold while the appeals process plays out.

In one brief, lawyers for the Alliance Defending Freedom representing religious nonprofits and businesses said that OSHA had exceeded its authority in issuing the requirement. The groups say they object to the mandate's "financial burdens, its restrictions on employee hiring, and its coercion of employee choices. "

Another petition from a coalition of business groups said they would be irreparably harmed by the requirement because they will "permanently lose clients and reputation as a result of losing workers who immediately quit and join smaller companies rather than be vaccinated or tested weekly."

The appeals have yet to be formally received by the high court and have not yet been officially docketed as of Saturday morning. Once on the docket, the court is likely to call for a response from the government before acting.

A fight headed to the Supreme Court

On Thursday, the Supreme Court was asked by the Justice Department to let the government fully implement a vaccine requirement for health care workers at providers that participate in Medicare or Medicaid. One appeals court has backed the requirement, but two other appeals courts have doubted the mandate's legality, leaving it blocked in half the states in the country.

The justices gave those challenging the mandate a December 30 deadline for responding to the DOJ request to reinstate it.