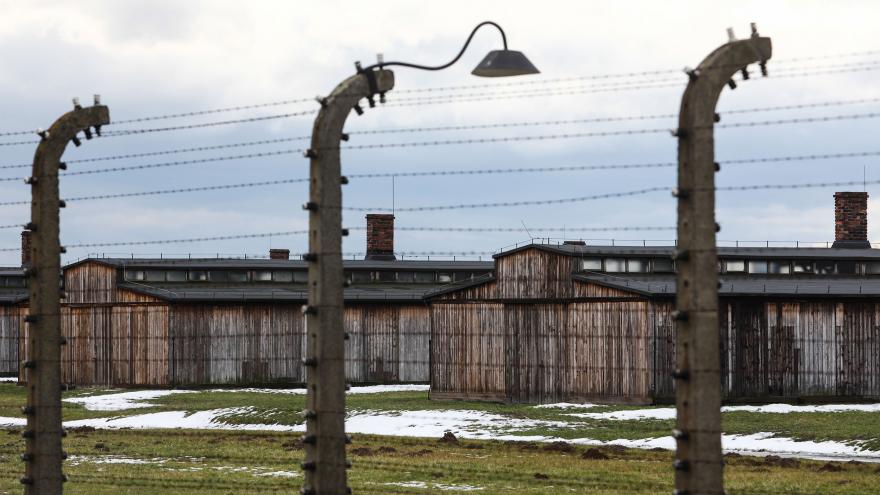 (CNN) -- Anti-Semitic graffiti has been found at the Auschwitz concentration camp complex, staff from the museum said in a statement on Tuesday, denouncing the incident as "an outrageous attack" on the memorial site.

The vandalism, some of which was anti-Semitic, was sprayed in English and German on nine wooden barracks at the Auschwitz-Birkenau site. It was discovered on Tuesday and has been reported to police. CCTV footage is also being analyzed, the museum said in its statement shared on Twitter.

"Such incident -- an offense against the Memorial Site -- is, above all, an outrageous attack on the symbol of one of the greatest tragedies in human history and an extremely painful blow to the memory of all the victims of the German Nazi Auschwitz-Birkenau camp," the statement read.

"We hope that the person or persons who committed this outrageous act will be found and punished," it continued, alongside an appeal for eyewitnesses to share information.

Auschwitz-Birkenau, established in Nazi-occupied Poland, was the largest concentration camp run by Hitler's regime. More than 1.1 million men, women and children were systematically murdered there, many in the camp's gas chambers. Some 6 million Jews were killed in the Holocaust.

The museum said security at the 170-hectare site is "constantly" being expanded but it is financed by the museum's budget, which has been hit by the coronavirus pandemic.

The number of anti-Semitic incidents in Germany has been growing steadily in recent years, Deutsche Welle reported in February.

Across Europe, anti-Semitic attacks have been rising for years. Jewish cemeteries from France to Poland are regularly desecrated, and nine out of 10 European Jews believe that anti-Semitism is on the rise, according to a survey by the European Commission.