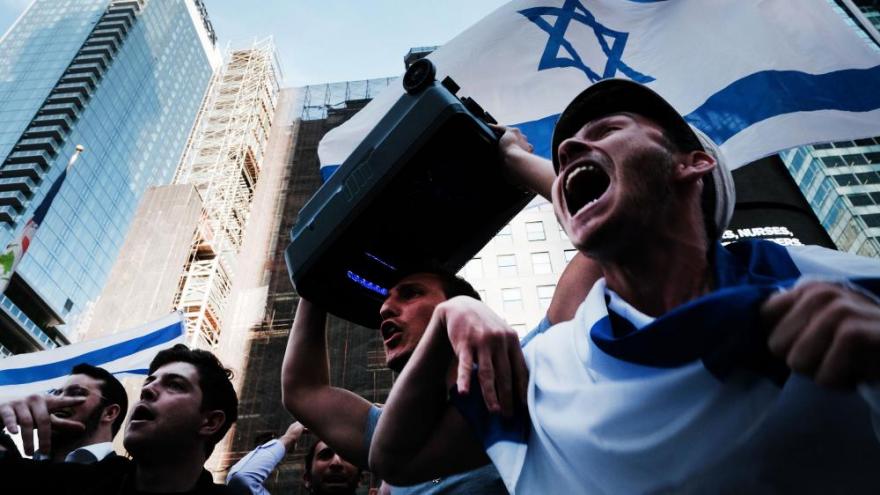 Authorities are investigating assaults in New York and Los Angeles as tensions flair over the Israeli-Palestinian conflict amid days of violence between Israel and Hamas militants in Gaza that have left hundreds of people dead. Supporters of Israel are shown gathered at New York's Times Square on Thursday.

(CNN) -- Several Jewish people have been attacked in cities across the United States this week.

Authorities are investigating assaults in New York and Los Angeles as tensions flare over the Israeli-Palestinian conflict amid days of violence between Israel and Hamas militants in Gaza that have left hundreds of people dead.

A man was arrested after a 29-year-old Jewish man was punched, kicked and pepper-sprayed Thursday during an incident in New York's Times Square, a source with the New York Police Department told CNN.

The suspect has been identified as 23-year-old Waseem Awawdeh, the NYPD said, and investigators are recommending several charges, including one hate crime assault. CNN was not able to immediately identify an attorney for Awawdeh.

The NYPD has said the gang assault happened near the protests that erupted Thursday night in Times Square, shortly after an announced ceasefire between Israel and Hamas went into effect.

At least 26 were arrested Thursday night as pro-Israeli and pro-Palestinian protestors clashed in different parts of the city, police said.

While police said it is unclear if the individuals involved in the assault in New York were part of the protests in Times Square, New York Gov. Andrew Cuomo has said the man was assaulted by protesters.

A video recorded by a bystander shows several people kicking a man on the ground and hitting him with unidentified objects. It's unclear what happened before the video began.

It appears some people come to the man's aid, the video shows, and later police officers clear the area and stand guard of the man, who then begins shouting and is held back by the officers.

While the victim has not been publicly identified, Nassau County Executive Laura Curran said he lives in Nassau.

Curran was "appalled" by the attack in New York City and has asked the police on Long Island to reach out to synagogues yeshivas and other houses of worship "to ensure all of our residents are protected," she said in a statement.

"It is completely unacceptable for anybody to be intimidated or attacked because of who they are, and we will not tolerate in Nassau County," Curran said. "We stand with our Jewish brothers and sisters and against vile Anti-Semitism that will never find comfort in our communities."

The New York Police Department's Hate Crime Task Force tweeted that it is investigating the incident and Governor Cuomo has directed the State Police Hate Crimes Task Force to offer assistance in the investigation.

"I unequivocally condemn these brutal attacks on visibly Jewish New Yorkers and we will not tolerate anti-Semitic violent gang harassment and intimidation," Governor Andrew Cuomo said Friday. "Those of all faiths, backgrounds and ethnicities must be able to walk the streets safely and free from harassment and violence."

When asked about the incidents, a spokesman for the nation's largest Muslim civil rights group, the Council on American-Islamic Relations (CAIR), said the group condemns anyone who engages in hate speech, intimidation and violence.

"We encourage people to express their views to participate in rallies for whatever cause they believe in but no one has the right to engage in violence, hate speech or intimidation," said Ibrahim Hooper, a CAIR spokesman.

"We understand that passions are high but that's not an excuse for inappropriate behavior," he added.

The Anti-Defamation League (ADL) said on Thursday that "it has received more reports of possible anti-Semitic incidents since the conflict broke out in Israel, with 193 reports in the week after the crisis began, up from 131 the previous week."

Five people were injured in a Los Angeles restaurant

In Los Angeles, police are investigating after reports that several Jewish people dining at a sushi restaurant on Tuesday were targeted by a group of pro-Palestinian men who were driving past them.

A woman who said she was dining at the restaurant told CNN that the people in the cars began throwing bottles at them and yelled anti-Semitic slurs, including the words "dirty Jew."

Five people suffered minor injuries and no arrests had been made as of Thursday, LAPD Public Information Officer Jeff Lee told CNN.

Video obtained by CNN shows a man swinging a metal stanchion at masked men wearing black and punching one of the men as they try to grab it from his hands. He is then pushed against a car where he is kicked and punched by the group of men. Police said they are aware of video of the incident.

Los Angeles Mayor Eric Garcetti condemned the alleged attack, saying such incidents will be meet "with a full force of law."

A synagogue in Arizona was vandalized

Former Arizona Rep. Gabby Giffords and Arizona state Rep. Alma Hernandez, who attend the synagogue, confirmed it had been vandalized.

"It's heartbreaking to see such a disgusting act in a place where so many are meant to feel safest. Despite these actions, we will not be shaken," Giffords tweeted.

"Hate has no place in Arizona," she added.

Tucson Police Sgt. Richard Gradillas said a "rock size hole" was found in a glass door at the synagogue but the hole was not large enough for anyone to enter. The building was "secure" Tuesday night and the damage was found Wednesday morning, he said.

Police have not identified a suspect, Gradillas said.