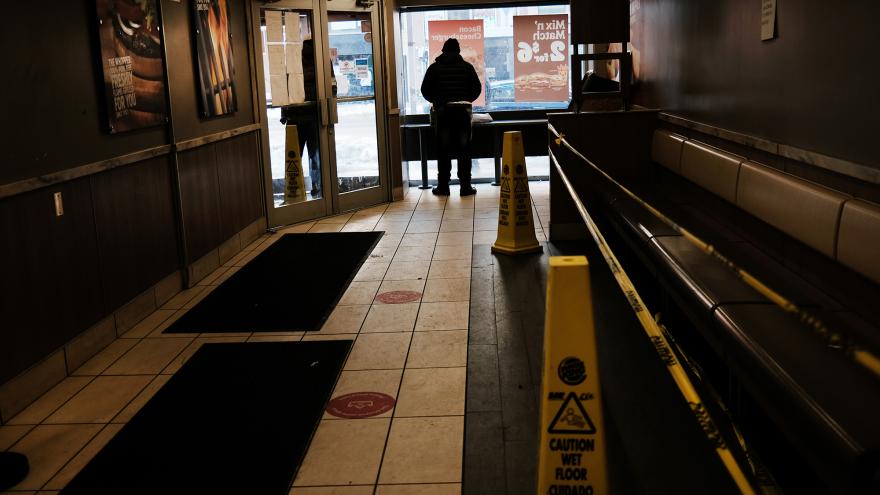 (CNN) -- America's unemployment crisis shows no signs of letting up.

Another 793,000American workers filed for first-time unemployment benefits last week on a seasonally adjusted basis, according to the Department of Labor.

Jobless claims continue to be stubbornly high: It was a small decrease from the previous week's claims, which were revised higher. But it was also more than economists had expected and nearly four times as many claims as during the same period last year, just before the pandemic hit.

"The overall picture is of a labor market recovery that is struggling to regain traction, wrote Wells Fargo senior economist Sarah House, in a note to clients.

On top of regular state claims, 334,524 workers filed for benefits under the Pandemic Unemployment Assistance program, which provides aid for gig workers and the self-employed. This number is not seasonally adjusted. It was also a slight decrease from the prior week.

Continued claims, which counts workers who filed for at least two weeks of benefits in a row, stood at 4.5 million.

In the week ended January 23, the number of Americans receiving some form of government benefits rose by some 2.6 million to 20.4 million. Claimants increased for the PUA program, as well as the Pandemic Emergency Unemployment Compensation program, which provides benefits for those who have exhausted their state aid.

It's a sobering number as the nation inches closer to the one-year anniversary of the start of the pandemic.

"We suspect the increase not only reflects the soft patch the jobs market hit around the holidays as Covid cases spiked and restrictions were increased, but also eligibility extensions under these programs per the December fiscal relief package," said House.

In short, America's jobs crisis is far from over.

Long-term unemployment is still a problem in this crisis, and it will continue to be even after many jobless workers are able to return to their previous jobs. Many newly unemployed workers in September and October experienced joblessness for the second time during the pandemic, according to a report from the JPMorgan Chase Institute published Thursday. The report also found that as of October, nearly half of unemployed workers had already been jobless for six months.

As the nation awaits enough vaccinations to be administered to achieve herd immunity, new coronavirus variants are casting a shadow over hopes for a full economic reopening. For the hardest-hit industries, such as hospitality and travel, the emergence of these variants could halt reopening plans in their tracks.

"While the progress of vaccination efforts has stymied an increase in new layoffs in December, the rate at which unemployed workers are finding new jobs and exiting the jobless rolls has yet to keep pace," wrote Andrew Stettner, senior fellow at The Century Foundation, in emailed comments.

In January, the US economy added a modest 49,000 jobs, reversing some of the losses registered in December. The nation remains down some 10 million jobs since last February. For the unemployed, things aren't getting better fast enough. In Washington, this means more work needs to be done before the programs supporting the unemployed expire again in March.

Correction: An earlier version of this story incorrectly characterized the change in jobless claims relative to the prior week. They decreased last week.