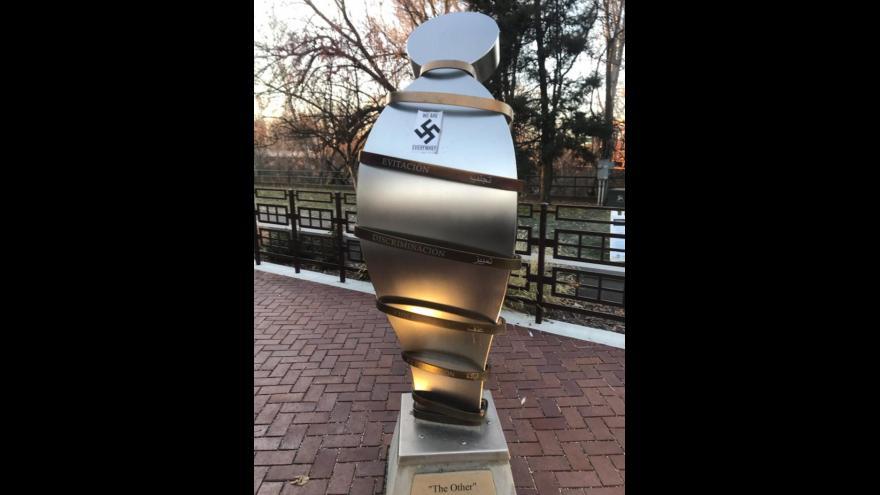 The stickers placed on the Anne Frank Memorial had swastikas with the words, "We are everywhere."

(CNN) -- A memorial dedicated to Anne Frank was desecrated with stickers showing swastikas.

The Anne Frank Memorial in Boise, Idaho, which is managed by the Wassmuth Center, was vandalized on Tuesday, the organization said in a Facebook post.

The stickers had swastikas with the words "we are everywhere" written on them.

The Wassmuth Center was founded in 1996 with the goal of constructing a memorial to human rights, its website says. In 2002, that goal was realized when the Idaho Anne Frank Human Rights Memorial opened to the public, which the organization says is an educational park inspired by "Frank's faith in humanity."

"Frankly, it's a sad day," Wassmuth Center Executive Director Dan Prinzing told CNN. "The Memorial is located in the heart of the capital city; we are the heart of the city. Such a blatant act of hate, directed in such a fashion, emboldened to occur, is just sad. We also recognize that now we must fundraise to add a security system in the Memorial."

Luckily, no damage was done to the memorial, only some extra cleaning to remove the sticky residue, Prinzing said.

The Boise police department did not respond to a request for comment from CNN.

"The Memorial was funded by individuals, businesses and foundation to be a physical statement of our shared values; we recognize today that one of those values is that we must stand up to confront hate," Prinzing said.