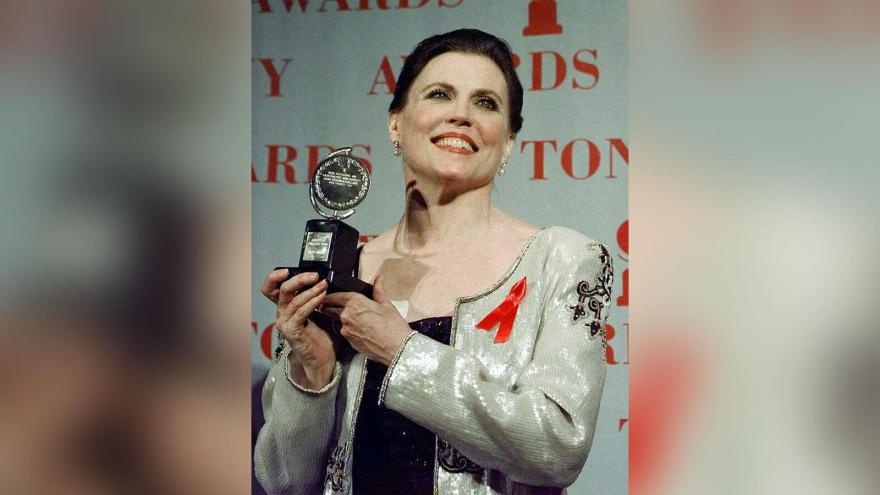 Ann Reinking poses with her Tony Award for Best Choreography for the show "Chicago" during the 1997 Tony Awards at Radio City Music Hall. She has died at age 71.

(CNN) -- Ann Reinking, the Broadway star who played Roxie Hart in the musical "Chicago," has died, her manager Lee Gross confirmed to CNN in an email late Monday. She was 71.

Reinking died in her sleep in a Seattle hotel Saturday, her sister-in-law, Dahrla King, told The New York Times. The cause of death is not yet known, NYT reported.

In a statement to Variety, the family mourned the loss of her "beautiful soul."

"The world and our family have lost a vibrant, amazing talent and beautiful soul. Ann was the heart of our family and the life of the party," the statement said. "She was visiting our brother in Washington state when she went to sleep and never woke up. We will miss her more than we can say. Heaven has the best choreographer available now. I'm sure they are dancing up a storm up there! Annie, we will love and miss you always!!!"

Born in Seattle in 1949, Reinking became known for her dancing in New York City Broadway shows, according to her bio on IMDB.

After her film debut in 1978's "Movie Movie," she went on to star in the Bob Fosse biopic "All That Jazz," winning several Oscar nominations.

Following her role as Micki in the 1984 comedy "Micki + Maude," Reinking took a break from acting and never returned to the silver screen.

Instead, she performed on television and stage, making a big Broadway comeback in the 1990's as Roxie Hart in "Chicago," which earned her the Tony Award for Best Choreography.

Reinking received several other Tony nominations for her performances in "Fosse," "Dancin," and "Goodtime Charley," according to Playbill.com.