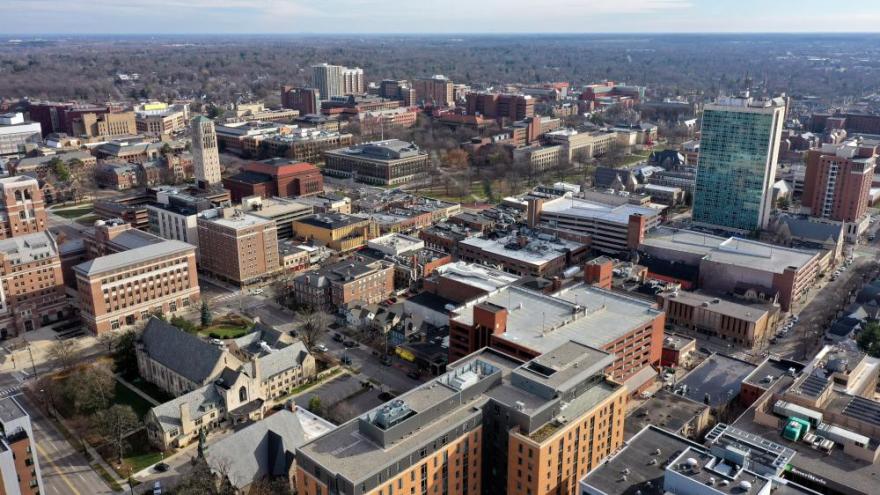 Ann Arbor, Michigan, will soon require menstrual products in public restrooms, as it sets to enact legislation national advocates say is a first.

The city council unanimously voted to pass an ordinance Monday requiring all public restrooms in the 120,000-resident college community -- including those located inside businesses -- to offer pads and tampons for free, as well as toilet paper and soap.

Violations of the ordinance, which will go into effect January 1, 2022, will result in a $100 fine, according to the legislation.

Ann Arbor Mayor Christopher Taylor, who proposed the ordinance, said "it is a necessity and a long time coming."

"Access to these items is a matter of personal dignity, a human necessity and a health care right," Taylor said at the city council meeting Monday.

The idea for this ordinance stems from a conversation Taylor had with a high school student, during which she expressed concern homeless people do not have access to menstrual products, Taylor said.

A study in St. Louis, Missouri published in 2019 found nearly two-thirds of low-income women could not afford the products at least once within the past year.

National nonprofit officials who advocate for increased access to menstrual products believe Ann Arbor is the first city in the United States to pass legislation mandating products beyond municipally-owned buildings.

Michela Bedard, executive director of PERIOD., a nonprofit aiming to end stigma and high costs of menstruation, told CNN, "It's entirely possible that there is a very small town out there that has made this decision, and they did it without any fanfare or meeting or help with advocacy. But certainly, this is the first major municipality that's made waves like this."

Knowing these products will be available in all public restrooms will both ensure inequities caused by menstruating are mitigated, and allow people to live uninhibited lives, said Nancy Kramer, founder of Free The Tampon, an organization promoting restroom equality to business leaders and policymakers.

"It really provides any person who's been menstruating a peace of mind that they currently don't have," Kramer said. "And it just helps us not have a level of potential embarrassment or humiliation."

Advocates and organizers pushing for reduced costs and stigma around menstrual products told CNN momentum has been building to what Bedard called this "tide-changing" decision over the last several years, as local and state governments took steps to increase access to these products.

California, New Hampshire and West Virginia are among the states voting to put menstrual products in school restrooms.

New York City enacted a program to put free tampons and pads in schools, homeless shelters and prisons in 2016, in a move Kramer said at the time "leads the way forward," according to a news release.

Brookline, Massachusetts, a suburb of Boston, is believed to be the first US municipality to put menstrual products in all bathrooms in government-owned buildings in 2019, according to advocacy organization the Massachusetts Municipal Association.

The Ann Arbor ordinance comes on the heels of Michigan Governor Gretchen Whitmer signing a bill repealing certain taxes on menstrual products on November 4, a move deemed a win by Bedard and other organizers.

"We hope that this trickles up and one day in our lifetimes we are going to realize that these products need to be everywhere, need to be accessible," Bedard said.

At the federal level, menstrual equality organizers have seen both wins and loses in recent years.

A bill proposed in 2019 by New York Congresswoman Grace Meng would have directed all public federal buildings to provide free menstrual products in bathrooms and Medicaid to cover the cost of these products for enrollees, but it died in Congress, according to the non-partisan legislation tracker GovTracker. Meng introduced a similar bill in 2021.

"This is a crisis that has been completely overlooked in our country -- and it's nearing its expiration," Bedard said. "This is going to be normalized in the next few years and in order to deal with the systemic reasons for this, we need to change this at a policy level."