Anheuser-Busch will brew a Ukrainian beer in the United States 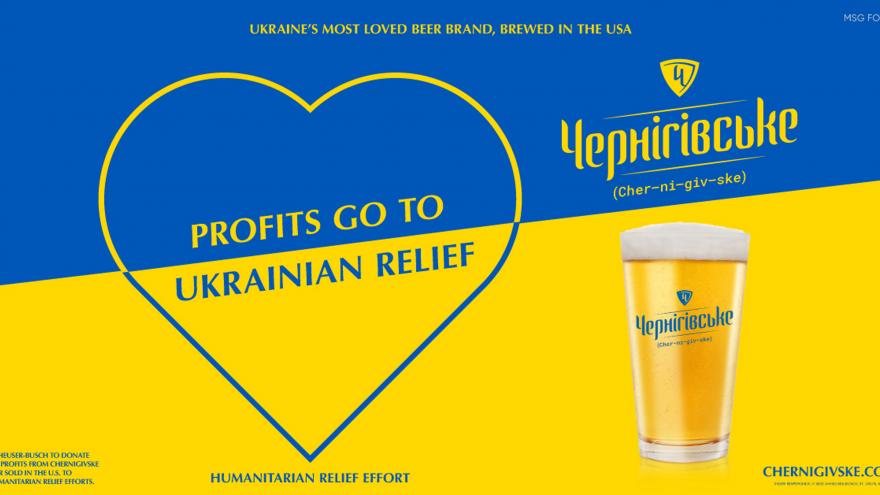 (CNN) -- Anheuser-Busch is bringing Ukraine's most popular beer brand to the United States with proceeds benefiting humanitarian relief in the war-torn country.

Beginning in May, Chernigivske will brewed at Anheuser-Busch's Newark, New Jersey, factory and be sold on draught in Los Angeles, New York, Chicago, Houston, and Phoenix. Specific locations will be announced on a special website.

AB InBev said the initiative is "aimed at providing humanitarian relief for those impacted by the crisis in Ukraine." In addition to the beer's sales, the company will donate at least $5 million to humanitarian aid organizations, including a nonprofit called CARE Ukraine Crisis Fund.

Chernigivske's brand celebrates Ukraine's history, culture, and people, according to a description, and has "subtly fruity notes" and a "moderately bitter finish." The pale golden lager, which is part of AB InBev's portfolio, is named after the hard hit Ukrainian city of Chernihiv and has been brewed there since 1988.

The brewer has recently brought the beer to other countries, including the United Kingdom, Germany, Belgium, France and the Netherlands. The initiative is part of broader efforts to support Ukraine, which including donating emergency drinking water and essential supplies to refugee relief areas. AB InBev has about 1,800 employees in the country and it said it has provided "critical assistance" to them.

Last week, AB InBev announced it would sell its stake in Russian joint-venture AB InBev Efes which will result in a $1.1 billion impairment charge in its first quarter results.

In March, AB InBev requested the controlling shareholder of its Russia operations to "suspend the license for the production and sale" of Budweiser in the country. It added that it forfeited "all financial benefit from the joint venture operations," according to a previous statement.

-- Reuters contributed to this report. This story has been updated to clarify the nature of AB InBev's relationship to its Russian partner.