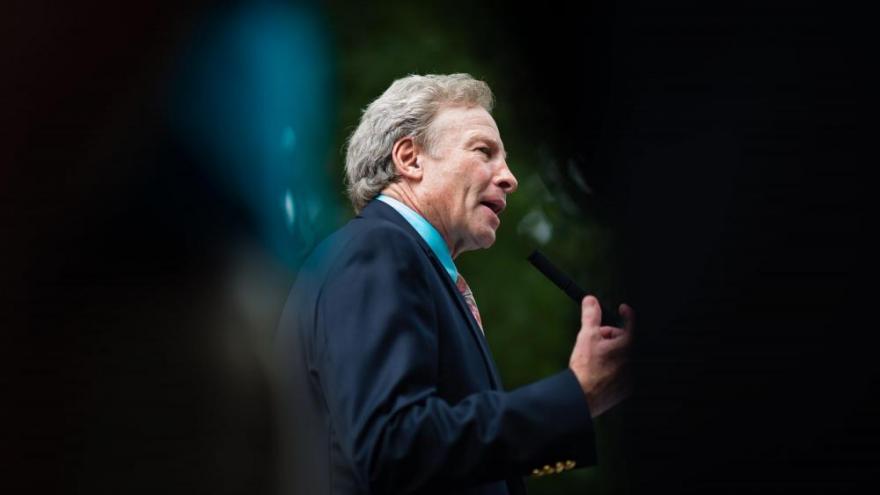 Andy Parker, the father of Alison Parker, speaks at an event in September 2015. Survivors from the cruel summer of gun violence, other survivors from around the country and supporters of Everytown and Moms Demand Action for Gun Sense In America held a rally at the US Capitol on Thursday September 10, 2015.

(CNN) -- Andy Parker, whose daughter Alison, a TV reporter, was fatally shot during a live broadcast in 2015, announced Thursday that he's running for Congress.

"In 2015, my 24-year-old daughter, Alison Parker, was shot and killed on live television. I had a choice to retreat into my grief or honor Alison's life through action. I chose the latter," Parker tweeted.

A longtime gun control advocate and supporter of greater regulation of the tech industry, Parker is seeking the Democratic nomination in Virginia's 5th Congressional District. The district has been controlled by Republicans since 2011 and is considered "Solid Republican" by the Cook Political Report.

The seat is currently occupied by Republican Rep. Bob Good, a strong gun rights supporter who voted to overturn the 2020 election results and has embraced former President Donald Trump's false claim that the election was stolen.

In his announcement, Parker pointed to the "inexcusable rhetoric and embarrassing behavior" of Good among factors prompting him to seek office, calling him "a leader in the new 'Lost Cause' claiming the 2020 election was 'stolen' from former President Donald Trump."

Reached for comment, Good's campaign did not respond specifically to Parker's accusations but instead emphasized his conservative voting record, saying he has "been on the front line fighting for our nation's founding principles and against the Democrats' radical leftist agenda."

Parker also said that he intends to "limit the influence of giant tech companies and billionaires" and "to make the internet safer for kids and families and make the economy fairer for everyone."

This isn't Parker's first time running for public office. Between 2004 and 2008, he was a member of the Henry County Board of Supervisors, and in 2007 he sought election to the Virginia House of Delegates, but was defeated by a Republican candidate. In 2017, Parker was considering running for Congress from Virginia's 6th District.

In 2015, his daughter Alison, a journalist with WDBJ-TV, was fatally shot by a former station employee while she was reporting on air. Cameraman Adam Ward was also killed. The shooting prompted Parker to abandon a second bid for the board of supervisors.

Since his daughter's killing, Parker has advocated for gun control measures and took on tech companies for failing to eliminate videos depicting the incident, filing complaints against Facebook and Google with the Federal Trade Commission.

Parker also testified in front of the Senate Judiciary Committee in 2019, arguing that Section 230 of the Communications Decency Act, shielding tech companies from liability over what users post, should be amended.

Other Democratic hopefuls who will compete in a primary election on June 21 include Lewis Combs, an attorney and former prosecutor in Charlottesville; farmer Warren McLellan; and Joshua Throneburg, an ordained minister and owner of a cleaning service in Charlottesville.

CORRECTION: A previous version of this story misspelled Warren McLellan's name. The story has also been updated to include comment from Good's campaign.