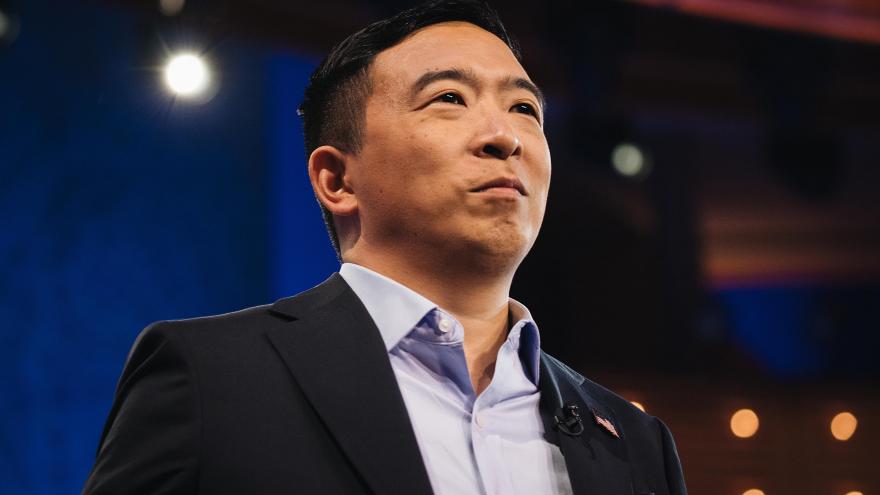 It's the end to an upstart run that vaulted the businessman from obscurity to a Democratic contender backed by a devoted following known as the Yang Gang.

Yang's decision comes a week after a disappointing finish in Iowa, where the campaign invested millions and spent two weeks on a bus tour leading up to the caucuses. The investment didn't pan out: Yang finished with just 1% support in Iowa and, after leaving the state with depleted resources, had to lay off staff as he looked to trim his campaign's costs.

"With a crystal ball, we might not have invested as much energy in Iowa, because I think that that lack of clarity afterwards hurt every candidate," Yang told CNN the day before the New Hampshire primary. "But we're excited about being here in New Hampshire."

But Yang lacked the kind of infrastructure in New Hampshire that he had in Iowa, leading aides to expect another less than stellar finish.

Even days before the primary, top Yang aides were candid about the future of the campaign.

"If we don't show as well in New Hampshire, there will be some reassessment," said a Yang aide, "especially if it ends up being the worst-case scenario."

Yang launched his campaign in 2017 to little fanfare. Even his family, Yang told CNN, asked "president of what" when he told them he had decided to run for the top job. But the businessman, by championing unique policy positions like a universal basic income, wide reaching programs to address automation and the legalization of marijuana, slowly created a devout following of liberal Democrats, libertarians and some disaffected Republicans.

While Yang over-performed what many experts believed he would accomplish in the Democratic primary, his following was unable to propel him beyond Iowa and New Hampshire, defeats that largely thwarted the candidate's rise.

Yang leaves the race, however, with a level of power in Democratic politics that no one would have expected when he entered the contest. Members of the eponymous Yang Gang -- colorfully known as Yangsters -- are devoted to the businessman, meaning Yang's next moves in the primary will be closely watched. And scores of top Democratic operatives, after watching Yang's rise, have said in private that the businessman should have a future role in Democratic politics or a Democratic administration.

Yang's campaign was defined by the candidate's happy go-lucky style -- videos of him singing in a church choir, dancing to the "Cupid Shuffle" and crowd surfing at an events regularly went viral, helping burnish his image as a candidate just happy to be with his fans.

He also often used high profile moment to compliment his opponents. When former Texas Rep. Beto O'Rourke dropped out and before a Democratic debate where they would have been standing next to each other, Yang simply tweeted, "I miss Beto." After Cory Booker failed to qualify for a debate stage, Yang used yet another debate stage moment to tell voter he thinks, "Cory will be back," a move that was appreciated by Booker and his top campaign aides.

Like other candidates, though, much of that money flowed to Iowa, where Yang spent more than two weeks on a bus tour throughout the state ahead of the caucuses.

That effort made clear that Iowa was critical to Yang. His top aides felt like the candidate -- because he came from nowhere -- needed to prove he could over-perform expectations in Iowa or New Hampshire to justify continuing the campaign.

That is why Yang spent hundreds of thousands of dollars on ads in the closing weeks of the campaign, hoping that success in Iowa -- which some defined as a top-five finish -- would give him credibility in future contests.

That credibility failed to materialize in the first two contests.

Yang -- the son of immigrants from Taiwan who was born in Schenectady, New York, in 1975 -- had no political experience before running for president. He told CNN in October that he lost all three times he ran for student government positions.

But Yang, after a brief stint at a law firm in the early 2000s, became the CEO of a test prep company and then started Venture for America, a non-profit that connects recent college graduates with start-ups. It was that experience that raised Yang's profile in Washington; in 2015, President Barack Obama named Yang an ambassador for global entrepreneurship.

Yang, like many insurgent candidates before him, leaned on non-traditional media to get attention. He became a staple on non-political podcasts, including an almost two-hour long podcast with controversial stand-up comedian and TV personality Joe Rogan, where his campaign says he first gained a national following.

It was clear by the end of Yang's campaign that his rapid rise -- and the sacrifices his family had made to allow him to run for president -- had weighed on the candidate.

Yang choked up days before the Iowa caucuses when he reflected on how far his campaign had come.

"I love Iowa," he said. "Campaigning here for the last two years has been the journey of my life. I am really glad you are going to determine the future of our country."

The comment caused Yang to visibly get emotional and cover his face.

"I was just reflecting on how far the campaign has come," Yang said the day after in Iowa. "The people have been very good to me and my family."