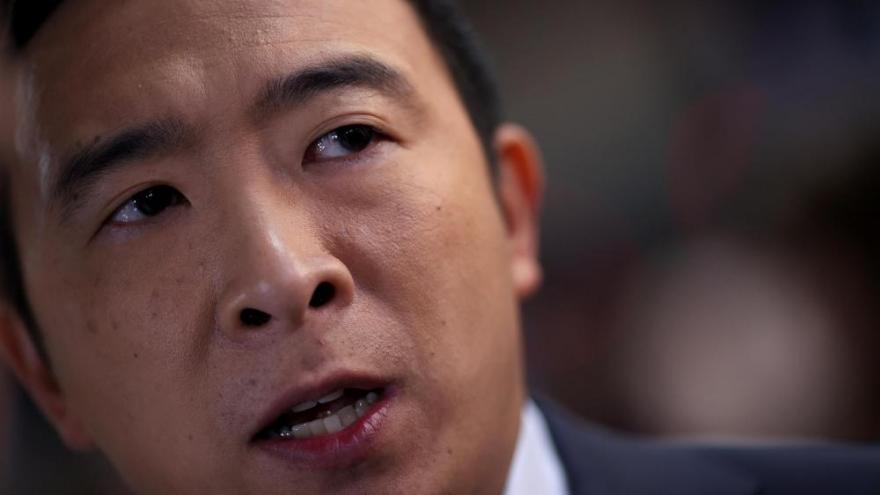 Andrew Yang speaks to reporters in the spin room after the Democratic presidential primary debate at St. Anselm College on February 07, 2020 in Manchester, New Hampshire.

(CNN) -- Andrew Yang, the former Democratic candidate for president who is currently running for mayor of New York City, tested positive for Covid-19 Tuesday, according to a statement from the Yang for NY Campaign team.

Yang said in the statement that he is experiencing mild symptoms and will continue to attend virtual events.

"When the time is right, I look forward to once again hitting the campaign trail and advancing a positive vision for our city's future," he added.

Two weeks ago, Yang announced he was quarantining after potentially being exposed to Covid-19 from a campaign staffer.

The positive test comes just a few weeks after Yang entered the crowded mayoral race, promising to "revive" a city stricken by the coronavirus.

He said the work of rescuing New York, where he has lived for nearly 25 years, from the pandemic's devastation would require "bold ideas and a fresh approach" -- an early nod to his unique platform, which includes a localized version of the "Universal Basic Income" pitch that was at the center of his presidential run.

But the early days his mayoral campaign suffered a pandemic-related gaffe when he responded to reporting by Politico about how he left New York for his second home located north of the city during some of the darkest days of the pandemic in New York.

Yang, an entrepreneur, suspended his presidential campaign in February 2020, and he spent time as a CNN contributor after leaving the campaign trail.