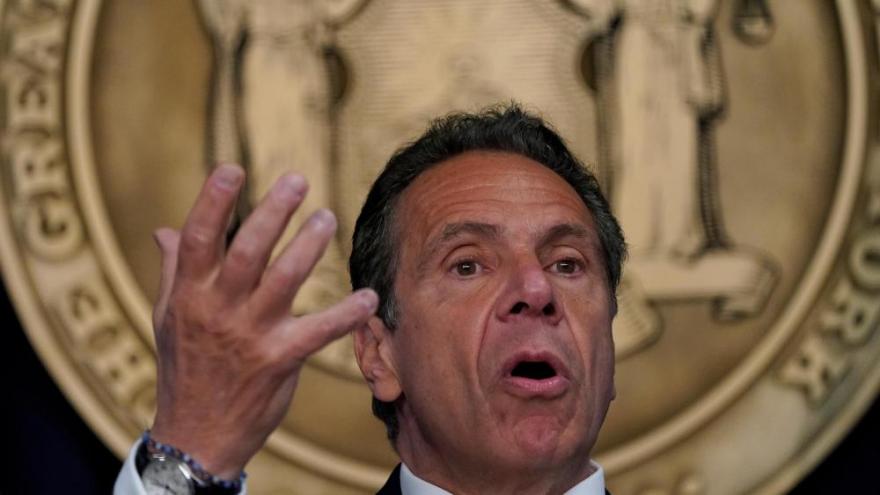 New York Gov. Andrew Cuomo is expected to face questions from members of the New York state attorney general's office related to their investigation into sexual harassment allegations against him, a source familiar with the investigation told CNN.

(CNN) -- New York Gov. Andrew Cuomo is expected to face questions on Saturday from members of the New York state attorney general's office related to their investigation into sexual harassment allegations against him, a source familiar with the investigation told CNN.

The interview with Cuomo signals that the investigation could be nearing its final stages, though no timeline has been established. Following multiple sexual harassment allegations against the Democratic governor earlier this year, New York Attorney General Letitia James announced an investigation that would result in a public report.

The two lawyers hired to lead the investigation for the attorney general's office, Joon Kim and Anne L. Clark, are expected to interview Cuomo in Albany, two people familiar with the matter told The New York Times.

A senior adviser to Cuomo, Richard Azzopardi, told CNN in a statement Thursday, "We have said repeatedly that the Governor doesn't want to comment on this review until he has cooperated, but the continued leaks are more evidence of the transparent political motivation of the Attorney General's review."

CNN has reached out to the New York state attorney general's office for comment.

The allegations against the governor include one that emerged in a February New York Times article. Charlotte Bennett, a 25-year-old former executive assistant and health policy adviser to Cuomo, told the newspaper that during one of several uncomfortable encounters, Cuomo asked her questions about her sex life during a conversation in his state Capitol office and said he was open to relationships with women in their 20s.

She interpreted the exchange -- which she said took place in June 2020, while the state was in the throes of fighting the pandemic -- as what the newspaper called "clear overtures to a sexual relationship."

Another former aide, Lindsey Boylan, accused Cuomo of sexual harassment, including an unwanted kiss. In a February Medium post, Boylan alleged that he kissed her on the lips following a one-on-one briefing in his New York City office in 2018.

Escalating backlash against Cuomo prompted him to release a statement at the time that acknowledged some of his comments in the workplace "may have been insensitive or too personal" and said he was "truly sorry" to those who might have "misinterpreted (the remarks) as an unwanted flirtation."

Cuomo has denied ever touching anyone inappropriately.

Beyond the investigation into the sexual harassment claims, James is also investigating nursing home deaths in New York and released a report in January that found that the state undercounted nursing home Covid-19-related deaths by about 50%.