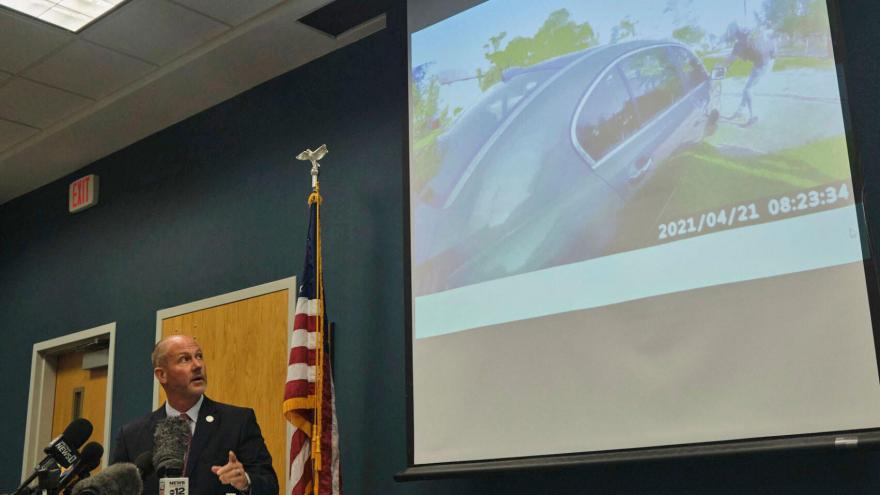 Pasquotank County District Attorney Andrew Womble shows still images from police body camera footage after announcing he will not charge deputies in the April 21 fatal shooting of Andrew Brown Jr. during a news conference on May 18. The attorneys for the family of Andrew Brown Jr. are now asking the Department of Justice to intervene.

(CNN) -- The attorneys for the family of Andrew Brown Jr. are asking the Department of Justice to intervene after a North Carolina district attorney said that deputies would not be charged in connection to his fatal shooting.

"We certainly got neither transparency nor justice today," the attorneys said in a statement Tuesday. "We request that the Federal Department of Justice intervene immediately."

The pushback comes after Pasquotank District Attorney Andrew Womble announced Tuesday that deputies who fatally shot Brown last month were justified in using deadly force, a finding that the attorneys described as "an insult and a slap in the face."

Womble also played four body-camera videos to the public for the first time on Tuesday. Brown's family and community have called for a full public release of the videos since his death on April 21 in Elizabeth City.

Pasquotank Sheriff Tommy Wooten has also joined those calls, petitioning for the court to allow a public release of the footage without redaction Tuesday.

The three deputies who fired at Brown, a 42-year-old Black man, while attempting to serve warrants will be also be reinstated and retrained, Wooten said.

However, he said disciplinary action would be taken against the deputies who responded to the scene. "While the district attorney concluded that no criminal law was violated, this was a terrible and tragic outcome, and we could do better," Wooten said, adding that two deputies did not turn on their body cameras during the incident.

Wooten also released a preliminary investigative report by the North Carolina Sheriff's Association and a preliminary expert review by a law enforcement agent commissioned by the sheriff's department. The reports were not used in Womble's decision not to charge the deputies.

While the expert agreed that the shots were fired in response to a threat, the incident also showed a need to evaluate tactics used by the officers.

"The tactical arena of law enforcement is ever changing, and a constant assessment of an agency's policies, procedures, resources and training is a necessity in order to maximize safety for citizens, law enforcement personnel and enhance organizational professionalism," law enforcement expert Paul R. Ohl wrote.

North Carolina Gov. Roy Cooper, who also called for the footage to be made public from the beginning, said in a statement to CNN that he also thought federal officials should investigate the incident.

"Public confidence would have been better served with a special prosecutor and by quickly making public the incident footage. Our state should pass specific laws to increase transparency, confidence and accountability in the justice system," Cooper said in the statement.

"North Carolina deserves a system that works to deliver justice, protects our communities, and serves the people -- not one that allows law enforcement to become warriors against our own citizens," Richardson said in a statement. "I am deeply troubled by the lack of transparency and accountability that has led us to this point."

And while intervention on a federal level is a viable option, Daniels, one of the Brown family attorneys, told CNN's Chris Cuomo that civil rights claims can be difficult for the Department of Justice to make. Instead, his team may only be left with civil action to bring justice to the family, he said.

What the footage showed

The police videos show that uniformed law enforcement officers arrived in a marked police truck to arrest Brown and surrounded him as he sat inside his vehicle.

They ordered him to stop the car, Womble said, but Brown instead reversed his car into a corner, pulling a deputy who was trying to open the car door off his feet. Brown then accelerated forward and turned left in his attempt to flee, forcing the deputy to jump out of the way and use his arm to push away from the vehicle, the videos show.

After Brown's vehicle drove toward the deputy, a sergeant on the scene then fired into the front window, the videos show. The car continued forward, and officers fired several more shots at Brown from the side and through the back windshield, he said. Brown's vehicle accelerated across a vacant lot and drove at another officer sitting in an unmarked police vehicle, which accelerated to avoid a collision, Womble said.

Brown's vehicle finally came to a rest against a tree, and the officers removed Brown and called for emergency services, he said.

A total of 14 shell casings were found at the scene, including from two Glock handguns and an AR-15 style rifle, Womble said. One of the shots hit the vehicle and ricocheted into a house, he said.

An autopsy conducted by Dr. Karen L. Kelly, a forensic pathologist, found Brown was shot twice, once in the shoulder and once in the back of the head. The bullet to his head splintered into three pieces, so Womble was not able to determine which of the officers fired the fatal shot.

Officials debate if the car was a weapon

In an interview on Fox News, Wooten said Brown was seen in the video "using the vehicle as a deadly weapon" and that deputies had to resort to deadly force to protect themselves and their fellow officers.

"As you can see in the video that was released today by District Attorney Womble, that gave much more information and shed a lot more light on this situation, the car did go in reverse at a quick acceleration, striking the deputy, causing him to lean over on the vehicle and then drove forward striking the deputy again, him having to push off with his left hand, while turning the wheel and heading toward a third deputy. All this went on inside of four seconds," Wooten said.

An attorney for the Brown family, Bakari Sellars, told CNN's Brian Todd that he did not see the vehicle being used as a weapon at any point in the video.

Sellars said the attorneys representing the Brown family believe that Womble never adequately explained the shot in the back of Brown's head.