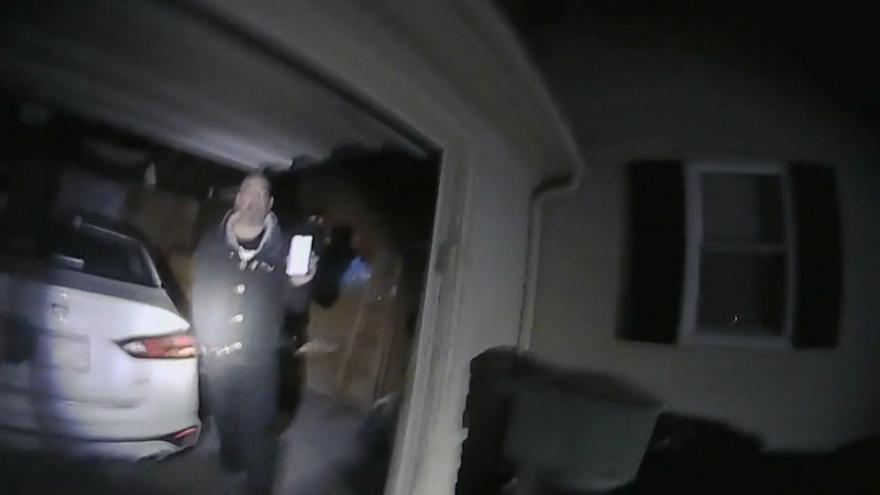 (CNN) -- New body camera footage released by Columbus, Ohio, police Thursday shows the moments after Andre Hill was shot by a police officer -- including Hill's body being handcuffed as he lay on the ground and a woman telling police he was there to bring her Christmas money and "didn't do anything."

The Columbus Division of Police released dozens of investigative materials -- including body camera video -- Thursday after the mayor and police chief promised accountability as a result of a thorough investigation into Hill's death.

Hill, who was Black, was fatally shot December 22. Adam Coy, the officer who shot Hill, was fired Monday and faces an independent criminal investigation by the state as well as US Department Justice, according to Columbus Police Chief Thomas Quinlan.

Officer Amy Detweiler was on scene when Hill, who was unarmed, was shot and killed. Footage from her body camera shows Hill lying on the floor of a home's garage while he is handcuffed.

An unidentified woman comes out of the home and tells police, "He was bringing me Christmas money! He didn't do anything."

Benjamin Crump, an attorney representing the Hill family, said at a news conference Thursday that Hill was visiting a family friend.

"He was an invitee at the home, he wasn't an intruder," Crump said. He also said Hill lay on the ground "struggling for life for five minutes and 11 seconds."

Detweiler said in a recorded investigative interview December 23 that she didn't observe any threats from Hill and that no verbal warnings were given to Hill by Coy.

She said she arrived on scene after Coy to respond to a disturbance call, when she saw Hill walk into a home's open, dark garage.

"He wasn't forcibly trying to get inside. There was just, he was just in the garage," Detweiler said in the audio recording. "But it didn't appear that he lived there. We couldn't tell, we needed to figure out (if he lived there)."

Detweiler said Coy asked Hill to come out of the garage, but didn't command him to come out with his hands up. As he complied, she said she saw Hill raise a cell phone in his left hand, but she couldn't see his right side.

Detweiler said in the interview that she didn't recall whether Coy told Hill to drop the gun that Coy claimed he had.

In a statement to CNN, Detweiler's attorney, Lathan Lipperman, said Columbus police officers are currently offered "very minimal" first aid training by the city and are not provided with medical equipment beyond basic first aid kits.

"Without the necessary training and medical equipment, officers -- including those on-scene for this incident -- cannot effectively render aid. Without the proper training, officers risk causing greater harm," Lipperman said. "The Fraternal Order of Police has requested the City provide officers with the necessary training and equipment to ensure that officers will be prepared to more effectively render aid in the future and hopefully that training will be provided on an annual basis."

Mark Collins and Kaitlyn Stephens, attorneys for Coy, said in a statement to CNN that they "understand and sympathize" with statements made about the delay in rendering aid.

"We are hopeful that (the Bureau of Criminal Investigation) and the Ohio Attorney General's office conducts a fair, thorough, and transparent investigation. Said investigation should be governed by Supreme Court jurisprudence, which mandates that the totality of the circumstances be accounted for from prior to the use of lethal force all the way to the instant where deadly force was used," the statement read.

Quinlan said "few" officers rendered aid prior to the medics' arrival, and the mayor said he's "horrified" by the time that passed before any officer sought to provide aid.

Quinlan said while responding officers did not use deadly force, "few of them rendered first aid to Mr. Hill as they waited for a medic."

Mayor Andrew J. Ginther echoed the chief's sentiment in a statement, saying, "I am horrified by the time that passed before any officer provided aid to Mr. Hill."

"Our officers are trained to provide potentially life-saving care, and at the very least, comfort in these situations," he said.

Both say one of the core values of the Columbus Division of Police is "compassion," and little to none of that was displayed as evidenced in the video.

Hill's family and their attorney said the body camera footage is further proof that his death was "unnecessary and unjustifiable."

Ginther said he has directed the chief to "investigate the events of Dec. 22 completely and thoroughly, and to hold all officers who failed to uphold Division standards accountable."

"We are investigating, to get to the bottom of who upheld the policies and standards of the Columbus Division of Police, and who did not," Quinlan said, noting a large amount of video review and interviews are part of that process.

Coy shouted that Hill had a gun before shooting him to death last week, according to a statement included in a report prepared by the Columbus police chief after the shooting that was released earlier this week.

Coy's body camera didn't capture audio because he didn't activate it until after the shooting. A look-back feature captured 60 seconds of video with no audio prior to Coy turning on his camera.

Coy and the other officer were dispatched on a disturbance call for someone "continuously restarting a gray SUV" and encountered Hill inside a garage. Both had their guns drawn and approached at an angle from opposite sides, according to her interview.

Coy asked Hill to exit the garage and Hill didn't respond verbally but started walking out of the garage.

Hill's left hand was holding a cell phone but his right hand was "concealed behind his leg." Released records state Hill had reportedly dropped his left hand before Coy shot him but it's not clear from Coy's video that happened.

Quinlan said he has recently tightened policies on body-worn cameras and the duty to render first aid.

"As a police chief, and just as a human being, the events of the last week have left me shaken, and heartbroken for the family of Andre Hill," Quinlan said. "I will not tolerate a repeat of these failures. And where officers failed, they will be held accountable."

After the release of the body camera footage Thursday, Crump commended the city for its efforts at transparency but asked: "Where is the humanity for Andre Hill?"

"What is Andre Hill's crime?" Crump said in the news conference. "Is it because he is a Black man, and for whatever reason, police in America shoot first and ask questions later?"

His family also reacted to the footage, saying it was horrifying to watch.

"Nobody had any type of human emotion or sympathy for this dying man gasping for his last breaths," Alvin Williams, Hill's younger brother, said. "And then you detain him worse than a caged animal. Not only for Columbus, Ohio, I'm saying this for all the police forces across this land. Your hunting season is over."

The family emphasized they want to work on making sure something like this doesn't happen again.

Crump also said that Clarissa Hill, Andre Hill's daughter, is interested in working on legislation to force officers to have their body cameras on or be fired.

The family described Hill as a kind man with various interests, including chess, cooking and helping his family with projects around the house.