Ana forms in the Atlantic, becoming the first named storm of the Atlantic hurricane season 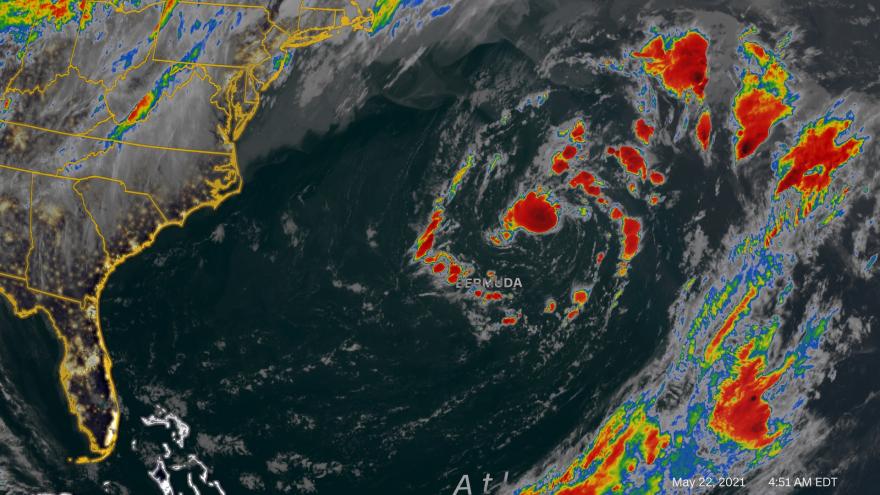 This is not the first year that a subtropical storm has marked the beginning of Atlantic hurricane season. Mostly recently, 2019 and 2018 featured Subtropical Storms Andrea and Alberto, which were the first named storms of the season to form in their respective years.

A subtropical storm has similar characteristics of a tropical storm but is not considered fully tropical because it doesn't depend on warm water temperatures to fuel its development.

"The system is considered a subtropical cyclone rather than a tropical cyclone since it is still entangled with an upper-level low as evident in water vapor satellite images, but it does have some tropical characteristics as well," the hurricane center said.

Ana is also unique because the storm originated in an area of the Atlantic that typically does not see tropical cyclones form in the month of May. Typically, storms during this month form over the eastern Gulf of Mexico, in the western Caribbean Sea, or near the Southeast coast of the US.

Fortunately, Subtropical Storm Ana is not expected to strike the US, however the storm could bring some impacts to Bermuda over the next day or so.

Ana has sustained winds of 45 mph and was located about 175 miles to the northeast of Bermuda on Saturday. The Bermuda Weather Service discontinued the tropical storm watch that had been issued for the island on Saturday morning, though locally gusty winds are still possible today.

The storm is forecast to remain in the vicinity of Bermuda on Saturday prior to turning to the northeast on Sunday. Little change in strength is forecast today, but a gradual weakening is expected tonight and Sunday. Ana is expected to dissipate in a couple of days.

The National Hurricane Center was also monitoring an area of disturbed weather in the western Gulf of Mexico since Thursday.

On Saturday morning this area of disturbed weather moved inland over southeastern Texas so this area of low pressure is no longer expected to become a named tropical cyclone.

"However, the system could produce heavy rainfall over portions of southeastern Texas and southwestern Louisiana today," the hurricane center said on Saturday morning.

Widespread totals of 1 to 3 inches of rain are forecast through Sunday night. Some isolated areas will likely receive up to 6 inches over an area that has already received an abundance of rain this past week.

Several dozen river gauges across Texas and Louisiana are already in flood stage and it will not take much rain to exacerbate flood conditions across these regions.

Coastal flood advisories are also in effect for portions of Texas, Louisiana and Mississippi through Sunday morning. Water levels may rise 1 to 2 feet higher than normal high tide levels as this area of low pressure moves on shore.

"Tidal fluctuations may occur, however the total water rise will continue mainly due to the strong easterly winds," the National Weather Service office in New Orleans said.

Significant coastal flooding is possible in portions of eastern Louisiana and western Mississippi where a coastal flood warning has also been issued. This area could see inundation of 2 to 4 feet through Saturday evening.

In addition to coastal flooding, there is also a high risk for rip currents along the Gulf Coast from Texas to the Florida Panhandle on Saturday.