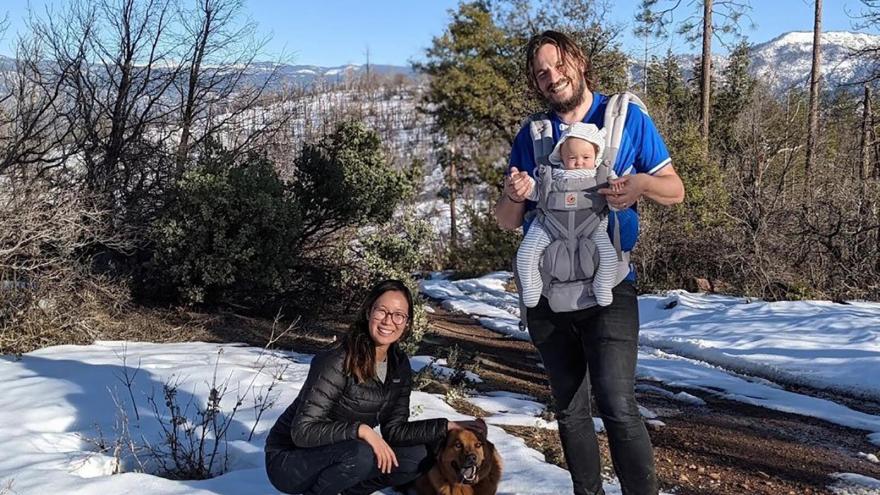 (CNN) -- Family selfies, nature photos, an unanswered text and several calls that were never connected detail the final hours of a California couple and their child before they died on a hiking trail near Yosemite last August.

Jonathan Gerrish, Ellen Chung and their 1-year-old daughter, Miju, died from hyperthermia, the condition of having a high body temperature, with possible dehydration due to environmental exposure.

After several months of investigating with the FBI, Mariposa County Sheriff's Office pulled data from Gerrish's cell phone, allowing it to retrace the family's last steps.

Authorities were able to pull a text message from Gerrish's phone at 11:56 a.m. asking for help. It was never received due to lack of cell service in the area.

"Can you help us," the text read. "On savage lundy trail heading back to Hites cove trail. No water or ver (over) heating with baby."

About 13 minutes following the unsuccessful text, Gerrish's phone showed that he tried calling multiple numbers, not including 911, but again, due to lack of service, the calls never connected, authorities said.

The first photo was a picture taken just a few yards from the trail head around 7:44 the morning of the family's hike, followed by 16 other photos including family selfies, photos of the river and creek, and concluding with a screen shot of their location from a trail app at 12:25 p.m.

The family set out on a hike on Sunday, August 15, after Gerrish, a frequent hiker, plotted the route for the Hite Cove hike, about 8 miles from Yosemite National Park, the night before, according to the sherrif's office.

Around 7:45 a.m., a witness walking in the area saw the family truck heading in the direction of the Hite Cove Trail Head, authorities said. At 8 a.m., the witness saw the truck parked at the trailhead and no family around.

The approximate temperature was 74 to 76 degrees, at elevation 3,880 feet.

The family was reported missing the following day, after the family babysitter arrived for her normal shift but was unable to locate Gerrish, Chung or their daughter, authorities said.

On August 17, search-and-rescue teams found the family dead 1.6 miles from their car on the Savage Lundy Trail. An empty 85-ounce water pack was with them.

At the Savage Lundy Trail intersection, the elevation is approximately 1,800 feet, and the temperature throughout the trail ranged between 107 and 109 degrees, cooling slightly in the evening. That section of the trail is a south/southeast facing slope, so it's exposed to constant sunlight.

The family dog, Oski, was also with them and authorities believe it suffered from heat-related issues, too.

"The cell phone data results were the last thing both the family and detectives were waiting on," Sheriff Jeremy Briese wrote in a Facebook post. "The extracted information confirms our initial findings."