An Olympian got lost, nearly missed his race, and won gold. Now he's tracked down the volunteer who helped him out 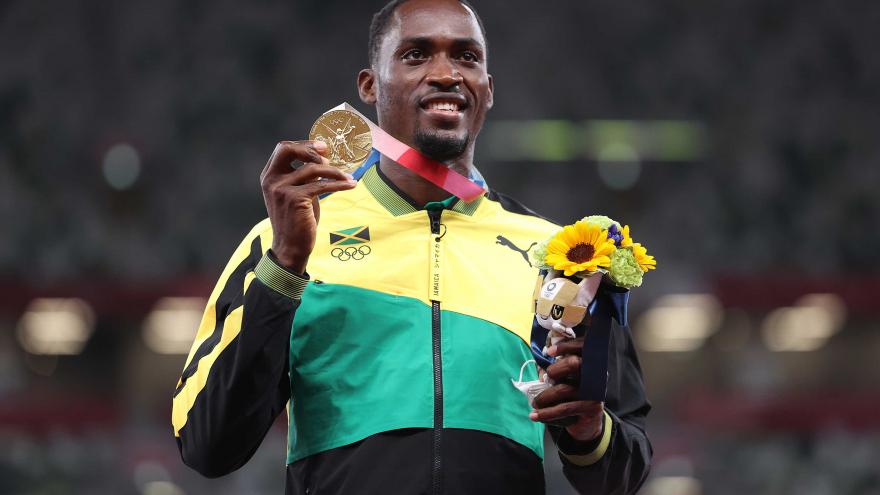 (CNN) -- It's a situation we can all relate to: You get on the wrong bus, lose track of time and come close to missing an important appointment -- or in the case of Hansle Parchment, almost don't make your semifinal in the 110 meters hurdles at the Olympic Games.

Jamaica's gold medal-winning hurdler narrowly avoided embarrassment thanks to a volunteer who gave the athlete money for a taxi after he accidentally traveled to an aquatics arena instead of Tokyo's Olympic Stadium on the day of his race.

And now Parchment has gone viral after tracking down the woman, repaying her for the cab, and showing her the gold medal he won the following day.

"I saw this volunteer and I had to beg... and she actually gave me some money to take one of the taxis. And that's how I was able to get to the warm-up track at the stadium and with enough time to warm up to compete," he said in a video recorded during the Games, which has attracted global attention this week.

"You were instrumental in me getting to the final that day," he told the volunteer after locating her.

Parchment finished second in his semifinal on August 4, behind the United States' favorite Grant Holloway.

His second-place finish meant he narrowly advanced to the final, where he went one better by claiming a surprise gold medal -- this time beating Holloway by one-twentieth of a second.

The volunteer's small act of kindness was praised by Jamaica's Prime Minister, Andrew Holness, who shared the video on Twitter and wrote: "Every Jamaican knows that gratitude is a must. @ParchmentHansle demonstrates that perfectly here."

And the country's Tourism Minister Edmund Bartlett has invited the woman to visit Jamaica, he told local newspaper The Gleaner.

"It is selfless what she did; one would not know what the outcome would have been" had Parchment arrived late, he told the paper.

Parchment's win secured one of Jamaica's four gold medals at the Tokyo Games.